Hisoka has forever longed to take on the leader of the Phantom Troupe, so does Chrollo finally fight Hisoka? 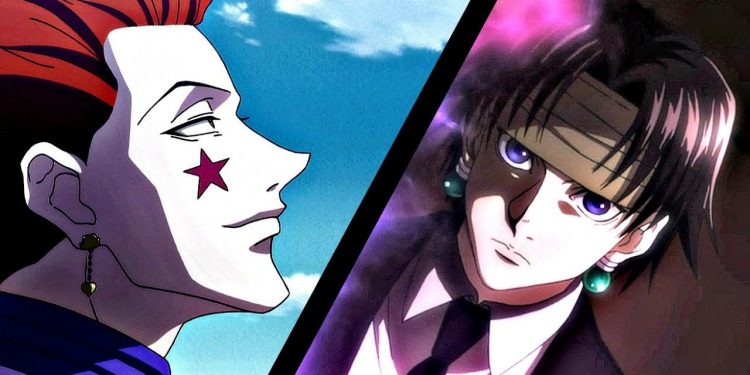 Chrollo and Hisoka are the two most powerful characters in the Hunter x Hunter series. Throughout the season, we see the tension and build-up to a fight between the two. But does Chrollo fight Hisoka? Chrollo Lucifer, the leader of the mighty Phantom Troupe, is finally a worthy opponent for Hisoka. Hisoka, however, outranks almost anyone with his kill count. He is one of the main antagonists. Hisoka, as described in the series, is mean and narcissistic. He slaughters people and spills blood every now and then. So, does Hisoka ever fight Chrollo?

Hunter x Hunter tells the story of Gon, a child who embarks on a journey to become a hunter. Hunters are professionals that tread in unknown lands and discover treasures. They belong to a specific “protectorate” that hunt down criminals and rare species of life. Gon, thus, initially goes forth following in his father’s footsteps to discover a brand new world.

Therefore Gon must pass through a group of tests to be called a hunter. The anime and the manga talk about this journey. There he meets different kinds of hunters, and obviously, some turn against him, and some join him. The story passes on as he meets the all-powerful Hisoka, a straight-up meanie. However, Hisoka and Chrollo form a unique companionship as they compete against each other. Hisoka joins the Phantom Troupe just in order to fight Chrollo. But, all of it comes crashing down as Chrollo’s Nen abilities are taken away. It is said that once Hisoka is able to find a way to bring back Chrollo’s Nen powers, they will go head to head against each other. Unfortunately, there is no official animated fight sequence of the two.

However, in the Hunter x Hunter manga, chapter 351 begins with the duo agreeing to fight each other until death. Fans have been begging Madhouse to create an OVA of the same at the least. The fight begins with Chrollo picking up his book while Hisoka prepares a card. Suddenly there is a small device in Chrollo’s hands. It was referred to as the Shalnark’s ability in the manga, The Black Voice.

Hisoka is surprised to see this and realizes the reason behind Chrollo avoiding him. Chrollo sends forward a judge attack and unleashes a number of strikes to injure him. The fight goes on with Chrollo revealing a number of tricks like The Sun and Moon, a bookmark called the Double Face. He unlocked a totally new side of the cloning ability. The fight ends with Hisoka dead. However, it is suggested that being killed by Chrollo does not mean the end of Hisoka. There is obviously more to it.

Hunter x Hunter has been originally written by Yoshihiro Togashi. The story is set in a fictional universe. Professionals called hunters travel the world take up jobs like hunting treasures and assassinations. They possess supernatural powers referred to as Nen. However, Nen is not just an ability but the life aura of an individual. Hunter x Hunter also has mythical creatures or beasts known as the Chimera Ants. Gon is the protagonist of this series. Other characters in it include Killua Zoldyck, Leorio Paradinight, and Kurapika are other fellow hunter trainees. They all gain the attention of Hisoka, who is kind of the main antagonist of this series.

The three mentioned versions of Hunter x Hunter follow a different storyline. The manga, as claimed by fans, is dark and serious as compared to the anime versions. The manga does not even follow a similar art style. The backgrounds keep on changing every now and then. However, the 1999 anime had its own storyline. The anime, though, was highly appealing to the audience back then. Even though it did not follow the manga very closely. But, the 2011 version of it is considered to be the best and the most streamlined. It is said to be modern and is not that dark as compared to the older version of it. It is far more consistent to the manga as well.

How Many Pokemon Does Ash have?