Scum's Wish or Kuzu No Honkai is one of the most controversial josei animes to ever air. It's controversial ending only adds to the mess. 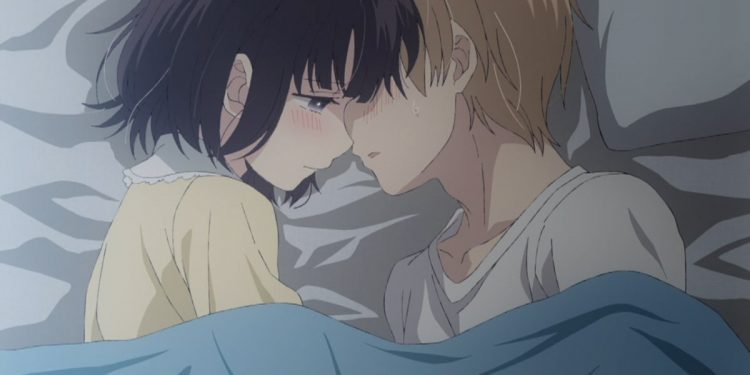 Kuzu No Honkai is a 2017 anime about romance, heartbreaks, and exploring sexuality for the first time. The anime is classified as being from the psychological fiction and romance genre. Although throughout the series they talk about love, it is more about the characters exploring their sexuality and physical intimacy. The manga was written and illustrated by Mengo Yokoyari and has been collected into eight Tankobon volumes. It was serialized in Square Enix’s seinen manga magazine Big Gangan from September 2012 to March 2017. The story of Kuzu No Honkai revolves around two teenagers, Hanabi Yasuraoka and Mugi Awaya, who are trying to get over heartbreak. As we follow up with the anime, we are left with the question, do Hanabi and Mugi end up together in Scum’s Wish?

In the story, we see both of their older crushes are actually falling in love with each other. This makes the two teenagers rely on each other to get over their unrequited love. The two make a pact to be in a fake relationship with each other, both emotionally and physically. To other people, Hanabi and Mugi seem like the perfect couple, but they are both just faking it to get through their own depressions. The two agree to never catch any feelings for each other and end their relationship if even one of them finds true love.

More about the Plot

Hanabi Yasuraoka is a high school student who has been in love with her childhood friend and neighbor, Narumi Kanai, for a long time. So when she finds out that he is going to be her homeroom teacher this year, she is obviously elated. But Narumi does not really notice Hanabi or her feelings. Instead, he starts to notice the music teacher at their school, Akane Minagawa. Akane also has feelings for him. On the other hand, Mugi Awaya was tutored by Akane in middle school and has been in love with her since then. So when a relationship starts to blossom between Akane Minagawa and Narumi Kanai, it hurts both Hanabi and Mugi.

Hanabi and Mugi meet each other in the school hallway by coincidence. And they realize that they are both in the same situation with the same unreciprocated feelings. As the two spend more time with each other, they decide to make a pact in order to heal their broken hearts. They decide to use each other as a substitute for the one they truly love, sharing physically intimate moments to forget their real unrequited love. Basically, Hanabi and Mugi start a fake sexual relationship with each other to forget their loneliness. But they also promise to never fall in love with each other and end the relationship if the one they actually love returns their feelings.

Their relationship is a very toxic and potentially damaging practice. But the two carry on doing it anyway, thinking they will get some satisfaction out of it.

Hanabi and Mugi’s Relationship throughout Kuzu no Honkai

In the first episode of Kuzu No Honkai, Hanabi and Mugi question each other on their own love interests. They both admit that there is very little chance that they will even get to confess their feelings. The two then start a pact to be in a fake sexual relationship with each other. Whenever one sees the other thinking about their true love, their task is to take the other to someplace private. Then they will engage in acts of physical intimacy. In front of others, they pretend to be a happy couple so that the pain of rejection won’t be too much.

As the series goes on, Mugi and Hanabi end up having multiple sexual encounters. This pact goes on for quite some time. Later on, Hanabi starts to experiment with her sexuality and has relations with another female student. Hanabi develops feelings for Mugi as she can no longer imagine him to be Kanai while they are together. Even Mugi feels the same way, and he cares for her feelings.

Do Hanabi and Mugi end up together?

The ending of Scum’s Wish is emotional but not conclusive. It featured a simple voice-over from Hanabi stating what happened to their relationship and what is going to happen in the future. Mugi seems to lose interest in Hanabi after he learns that she had started a sexual relationship with another character in the anime, Sanae Ebato. He starts to avoid her, but he does still harbor some feelings for her. In the end, they decide to go their separate ways with feelings of mutual admiration and sympathy. So, they move on from their toxic relationship to grow as people and find true love. So, we can say that Hanabi and Mugi do not end up together in Scum’s Wish.

Where to Watch Scum’s Wish?

Scum’s Wish is currently available to watch on Netflix or Amazon Prime.