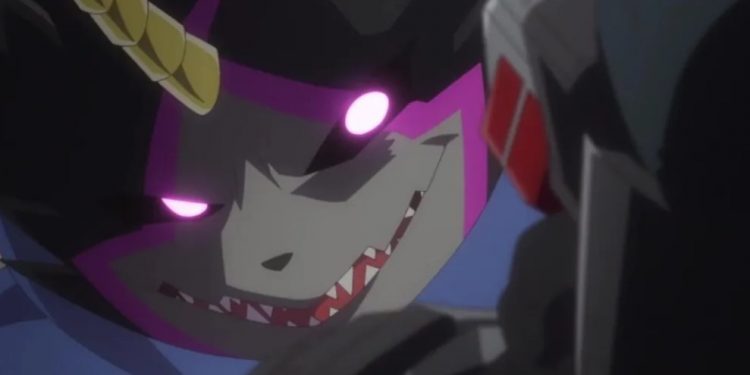 Digimon Ghost Game Episode 14 reveals the mystery behind a new technology created called Hologram that causes paranormal phenomena to frequently occur. The Holograms that appear at night the news called them Hologram Ghost. The Gorilla Hologram Ghosts was feeding on trash can food in the evening, but a mysterious laser blasted him and vanished. Digimon Ghost Game reveals the annihilation of Hologram Ghost. Gamamon met with his champion in the morning and thanked him for food. Hiro gathers with the Digimons and talks about the video that Monitamon took a few days ago. Hiro and Ruru notice that Salamandamon was rampaging.

They realize that Salamamndamon is a gecko, but they notice that someone killed him. Kiyoshiro and Ruru wonder who attacked Salamandamon, only seeing a knife. Hiro learns that the Digimon died after a single strike. Gamamon believed that it was murder. They ask Monitamon if he knows where the knife came from, but Monitamon has no clues. The Digimons know that a mysterious creature has been wiping them out. The Digimons decided to join forces to solve the matter since they might be the next target.

Kiyoshiro realizes that he is scared and tells the others to use the bathroom. The Digimon notice that Kiyoshiro wants to escape and pull him back. They play that video again and hear a familiar sound, and one of the Digimons wonders if it is “Der Scharfrichter.” Kiyoshiro realizes that Der Scharfricher is a German, and it means Executioner. They realize that there is an Urban Legend in the Digital World. The Urban Legend kills the Digimon with a single strike. Monitamon realizes that they only hear a sound before they are attacked.

Kiyoshiro heard “Neun, neun, Funf” and realized that it means 995 in German. Hiro adds that it is nine-hundred ninety-five and wonders what it means: the Digimons think the number of victims killed. Hiro realizes that it makes sense since the mysterious creature is the Executioner and has killed 995th victims. But he wonders how a Digimon can die. In the evening, the Executioner appears hiding in the dark. Hiro heads home with Gamamon and wakes up, realizing that the Executioner will appear.

Hiro realizes that Bakumon told them how the Executioner goes after Digimon indiscriminately. Kiyoshiro scold Gamamon for licking his computer and asks if Gamamon is hungry. Hiro thinks that the Executioner would target Gamamon. Kiyoshiro is still scared after seeing that video and thinks it is too dangerous. He knows that if the Executioner arrives, he will be around since he is always near Hiro. They realize that Jelymon might be in danger since she always goes out alone. Ruru and Backmon work on a computer and talk about the transparent shield SWAT teams have and wonder if they should buy some.

You can watch Digimon Ghost Game Episode 14 online on Funimation & Crunchyroll on Sunday at 9:00 PM JST. You can also watch Digimon Ghost Game Episode 14 online on Fuji TV & Youtube’s official channel. Executioner Sealsdramon targets Gamamon, but Bokomon protects Gamamon. Hiro’s team defeats the Executioner, but Gamamon rampages, and Hiro reminds him who he is, and he turns into his normal form. Let’s meet when Episode 14 is released.