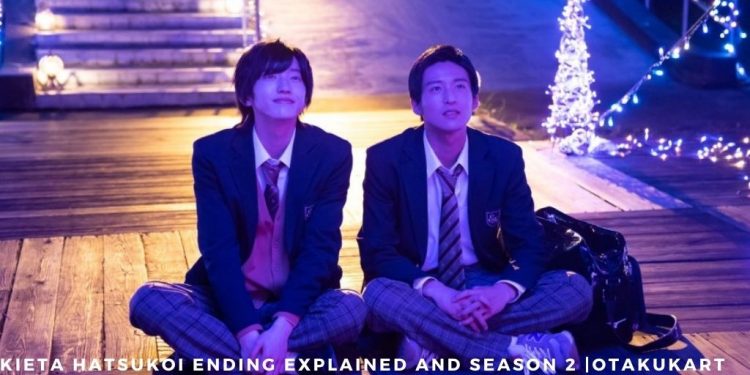 As the show has come to an end, fans can’t get over the ending and want to know whether Kieta Hatsukoi will be renewed for Season 2. There is no doubt that the series has won the hearts of many with its sweet and light-hearted story. Starting off with a dispute with a common object like an eraser, Ida and Aoki’s love story started. At first, trying to hide his crush’s crush, Aoki acts as if he likes Ida. Soon enough, he really started liking Ida. The Japanese drama captured the attention of the audience with perfect characters, their friendships, and, of course, the splendid cast was the perfect touch to the drama. It also has no villain in the story but still manages to be very interesting. Hats off to the writer for such a foolproof story!

Plus, the screenwriter Kuroiwa Tsutomu must be applauded for keeping the essence of the manga storyline in the drama’s plot. From Michieda Shunsuke’s (Aoki) on-point facial expressions and cuteness, Fukumoto Riko’s (Hashimoto) charming personality, which was definitely a scene-stealer to Meguru Ren’s (Ida) beauty, was amazing. Not to mention Suzuki Jin’s (Akkun) acting from a serious character in Given to a fun and laid-back character like Akkun. It would come as no surprise if Kieta Hatsukoi were named as one of the best BL-drama of this year. Keep reading to get a recap of the ending and to find out whether there would be a Season 2 for Kieta Hatukoi fans.

When Aoki and Hashimoto were preparing cakes for Ida and Akkun, respectively, Ida unexpectedly showed up in the kitchen. Furthermore, he tells Aoki that he wants to have an urgent conversation with him. After reaching the rooftop, he tells Aoki that some of his teammates saw him and Aoki holding hand and asked him whether he was dating Aoki. Further, he told Aoki that is why he revealed to them that he was truly dating Aoki.

Suddenly, Aoki gets angry at Ida and asks him why couldn’t he come up with excuses and hide their relationship. Upon hearing this, Ida gets hurt and queries whether he is embarrassed about going out with him. To that, Aoki replies by saying that even if he tries to explain it to Ida, Ida won’t understand it. Ida admits that he doesn’t understand why Aoki wants to keep their relationship a secret. After listening to this, Aoki tells him that he wants to break up because what they had wasn’t serious ever since the beginning. At this point, fans were worried that Aoki and Ida would only become good friends. Also, what do you think Ida did after he and Aoki broke up?

After saying that he wants to break up with Ida, Aoki quickly gets off the rooftop and heads for his classroom. There he finds Hashimoto huddled up in the corner of the classroom, looking very nervous. Instead of giving her handmade cake to Akkun by herself, she secretly kept it inside his desk because of the fear of getting rejected again. When the vice president of the class was giving Akkun a handmade cake, he kindly declined by saying he doesn’t like eating homemade cakes. Listening to this, Hashimoto gets sad and frustrated because she made a cake for Akkun that Akkun had suggested her to make.

Akkun takes Hashimoto’s cake and heads to the staircase where she was sitting. He asked her whether she was angry at him because he did not notice her cake. Hashimoto sadly replies that it was actually her mistake for getting all excited and making a cake for him. The audience and Hashimoto as well couldn’t stop smiling when Akkun said that what he said back in the class was just an excuse because he wanted to eat the cake that Hashimoto had made for him. Why don’t these two start dating already?

The Sweet Back Hug

Straight after Aoki’s outburst, Ida rushes to his teammates to come up with an excuse. Before starting off with the competition, he says that he was just joking about his relationship with Aoki and requested them not to bother Aoki about it. How sweet! But little did he know, Aoki had been up to something. After the match finished, his teammates told him that Aoki had requested and basically begged them to remain as Ida’s friends. They told him that Aoki was very worried about the effects of their relationship being public. With this, Ida was hit with a sudden realization and ran back to the school to see if Aoki was still there. When he arrived at the Illumination Festival location, he was hit with a sudden pang of sadness when he saw that no one was there.

While he was anxiously searching for Aoki, he got a message from Aoki that thanked him. In the text, Aoki said that he was very grateful for just the experience of dating him. Aoki explains that he is still in the school because he stayed behind to clean up after the celebration. Just when Aoki turned around to leave, Ida sprints towards him and wraps his arms around him. Ida apologizes to Aoki for not realizing how he had been trying to protect. Aoki apologized too for making him lie to his friends about their relationship. Ida caught Aoki off guard by confessing his love for him in words. Yes, you read it right. In the ending of Kieta Hatsukoi, Ida finally confessed to Aoki in words! After his confession, Aoki and Ida make up and start dating again. These two don’t leave a moment to steal the audience’s hearts.

All Starts And Ends Well With An Eraser

Fast-forwarding to prior to the winter holidays, the teacher introduces a new seating arrangement. In the arrangement, Aoki was the one who was sitting in front of Ida. And once again, he didn’t bring his eraser and was asking his friends for it. Ida gave him his eraser, and Aoki noticed something. Aoki saw his own name written on Ida’s eraser. The eraser was the symbol of the beginning of an understanding and ended with a love confession on the other. Just like the saying goes, ‘what starts with an eraser ends well with an eraser! Who knew that an eraser had such significance.

Will We Be Able To Meet Aoki And Ida In Kieta Hatsukoi Season 2?

Fans couldn’t stop thinking whether they will get a season 2 of Kieta Hatsukoi after watching its ending. Surely from the starting to the ending, the drama has been perfect, so it should come as no surprise that people want a Season 2 of Kieta Hatsukoi. Everything from the characters to the beautiful music had been perfect. Plus, the audience wouldn’t be surprised if the drama were confirmed to have a second season. Even though the Japanese BL drama wasn’t in Rakuten Viki before, the streaming platform bagged the series due to its immense popularity. The audience would love to see Michieda Shunsuke, Fukumoto Riko, Meguro Ren, and Suzuki Jin on the screen together once again. Fans had loved their incredible chemistry. Plus, their friendship shone when TV Asahi released some behind-the-scenes videos.

One of the most loved side characters in the drama was surely Hashimoto. Fans have loved her caring and kind personality. But you shouldn’t be fooled by her cute and tiny demeanor because this girl has a lot of power. Also, the audience had really admired her and Aoki’s friendship. Starting out as Aoki’s crush, Hashimoto and Aoki became really good friends by helping each other rout with their love lives. In addition to that, fans still can’t get over the scene when they realize that they liked different people. Coming to Aoki’s best friend Akkun, he is a true friend. He knew when was the right time to be nagging at Aoki and when he needed to be supportive of him. It was as if he could read Aoki’s mind.

Additionally, fans are wishing to see how Ida and Aoki navigate their dating life and more as grown adults in a second season. Stay tuned to see if the drama will have a second season.

Also Read: Semantic Error BL: Everything You Need To Know About The K-Drama