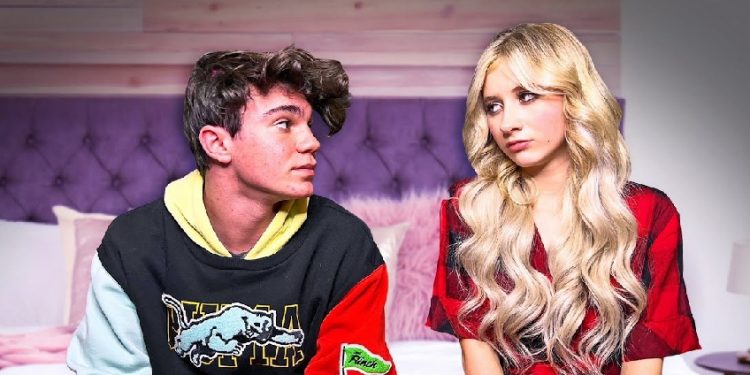 Elliana Walmsley, a professional dancer, and her lover, Jentzen Ramirez, have been dating since 2020. Elliana Walmsley’s fans are devastated to find that she and her boyfriend Jentzen Ramirez have broken up. Let’s take a look at what transpired among YouTubers. We Broke Up, Jentzen’s YouTube video, has received over one million views. Fans have sent comments on the video, expressing their support for the pair as they face a difficult time. Did Elliana And Jentzen Actually Break Up? Let’s see what happened when YouTubers Elliana and Jentzen break up news. But first, let’s take a look at Elliana and Jentzen in a nutshell. So, let’s get started. Elliana Kathryn Walmsley is 14 years old and was born on June 23, 2007. Elliana is a dancer from Boulder, Colorado, who appeared on Dance Moms Season 6 as a member of the ALDC Mini Team.

Walmsley has two brothers, Luke and Jacob, and his pals with Areana Lopez and Alex Oladi, both of whom were on Dance Moms. Jentzen is a year older, having been born in Austin, Texas, on August 8, 2006. Her sister Liana, who is also an actress, motivated her to pursue a career as an actor and YouTuber. Their family relocated to Los Angeles in order for the children to pursue acting careers, and Ramirez was cast in a Sharon Lawrence film. Jentzen made his television debut in the Lifetime film Babysitter’s Black Book in 2015. Jentzen has worked on commercials for KOHL’S, Charter Business Communications, Proctor & Gamble, SpinMaster, Whole Foods, Procybs, Hello Kylie, and Chalk Preschool, among others.

Did Elliana And Jentzen Actually Break Up?

Elliana Walmsley and Jentzen Ramirez have split up. In November 2021, they ended things. Jentzen revealed his break-up news in the caption of a recent video. Jentzen stated in the video that he would like to keep Elliana as his best friend and that she had agreed. They appear to have left an open door for what the future may contain since they may meet paths again, but they believe the timing isn’t right for a relationship. Jentzen also discussed some personal concerns, saying that juggling relationships, family, friends, YouTube, and his schoolwork have been difficult.

Elliana agreed with Jentzen’s remarks in the video, saying that they both understood the relationship wasn’t healthy and that her mental health wasn’t great at the time. Jentzen then went on to talk about how perfect Elliana is and reminisced about their past together, even including a romantic montage. The former couple also discussed their age and how young they are to be going through a break-up in public. It was difficult to break the news, but they agreed that because they share so much of their relationship on social media, it was only right that their followers knew.

When Did Elliana And Jentzen Started Dating?

Jentzen and Elliana began dating in October of last year, and he announced her as his girlfriend in a YouTube video. “Introducing My NEW GIRLFRIEND To My BEST FRIENDS**SECRET REVEAL**,” the video stated. He told his friends about her and live broadcasted the reveal on YouTube. Since then, the couple has released a series of videos together, including one in which they move in together for a day and another in which they get married for a day. He’s made a ‘couple prank’ videos on her, including one in which he faked to propose to her and another in which he was cruel to her mother. They had been dating for about a year. Sophie Fergi, his ex-girlfriend, wasn’t sure how she felt about the relationship when she learned about it, but she thought it was too soon after they had met.

What Makes Elliana So Special?

“Elliana is a type of girl who never gives up,” her mother, Yolanda, says. She aspires to fulfill her full potential with a never-say-die attitude, always pushing herself a step farther to achieve the tough. She continues to practice night after night until she is able to execute a dance step flawlessly. Elliana works tirelessly to encourage children her age to pursue their aspirations. She isn’t envious of her coworkers or competitors on reality shows. She constantly supports them and wishes them the best of luck. Her mother describes her as modest and caring. Elliana dislikes talking about her abilities. In fact, before ‘Dance Moms,’ her teachers and students at school were completely unaware of her talent and achievements. She kept her accomplishments hidden since she didn’t want her friends to think she was egotistical.