One Piece is an anime of mysteries, today we are here to discuss “Did Aokiji Join Blackbeard?” Aokiji is one of the most morally complex characters in the One Piece verse. The biggest mystery that remains unsolved about Aokiji does he Join Blackbeard or not, and if he did, what is his intentions behind it because Aokiji wouldn’t ally himself with a Yonko if he is not getting something out of it. Word has been around regarding his affiliations with Revolutionary Army and Dragon himself too. We are here today with this article to shine a light on these rumors, stay with us till the end to find out about whether or not Aokiji joined Blackbeard and, if he did, what are his intentions behind it.

Kuzan Aokiji was an Admiral in the marines before he resigned. Admirals are considered to be the greatest power of Navy. During his time in Marines, Kuzan was a faithful follower of world government. He always tried to follow the orders, but sometimes those orders didn’t exactly line up with his ideals or even went against them. His original justice was “Fire Up Justice” which later changed to “Lazy Justice”. Even while carrying out his duty as a Marine, Kuzan would occasionally exhibit a sense of mercy and honor that other world government officials didn’t. Like many characters in One Piece verse such as Smoker and Jaguar D Saul, after witnessing the senseless murder of so many innocent people, Kuzan came to realize how low World Government is willing to sink to achieve their goals.

Kuzan Aokiji is a very laid-back personality who very rarely shows any excitement or shock to anything. Kuzan wields the power of Hie Hie No Mi ( Chilly Chilly Fruit), a logia type that allows its user to freely control ice at will, turning them into freezing humans. Aokiji was the first admiral that we got to see in One Piece. Kuzan is a very compassionate man despite being a marine, he let Nico Robin escape buster call on Ohara, providing her a boat to escape while also a trail of ice for her to leave safely, he helped Tonji at Long Ring Land to cross the ocean with his ability. His compassion extends to pirates as well as long as their actions are mostly benevolent, he chose not to kill or arrest Luffy because the young pirate had defeated Crocodile and saved the people of Alabasta from grave tragedy.

In contrast to his former comrade, Fleet Admiral Sakazuki Akainu, Kuzan tolerates compromises with pirates. He is disgusted by Sakazuki’s brutal actions and his way of dealing with situations such as the Ohara incident. Even though he follows lazy justice, he understands his standing and doesn’t hesitate to do what is right and necessary for the needs of the Navy. He froze his former friend Jaguar D Saul following the same philosophy.

The answer to it is yes, during the Dressrosa arc, it was made clear that Kuzan is now affiliated with Blackbeard pirates when Jesus Burgess was talking to Blackbeard, indicating he doesn’t trust Aokiji.  His intentions behind this Affiliation remain a mystery. Some indications were also shown towards Aokiji’s connections to the underworld when he appeared on Punk Hazard and saved smoker from Doflamingo, which was no coincidence. 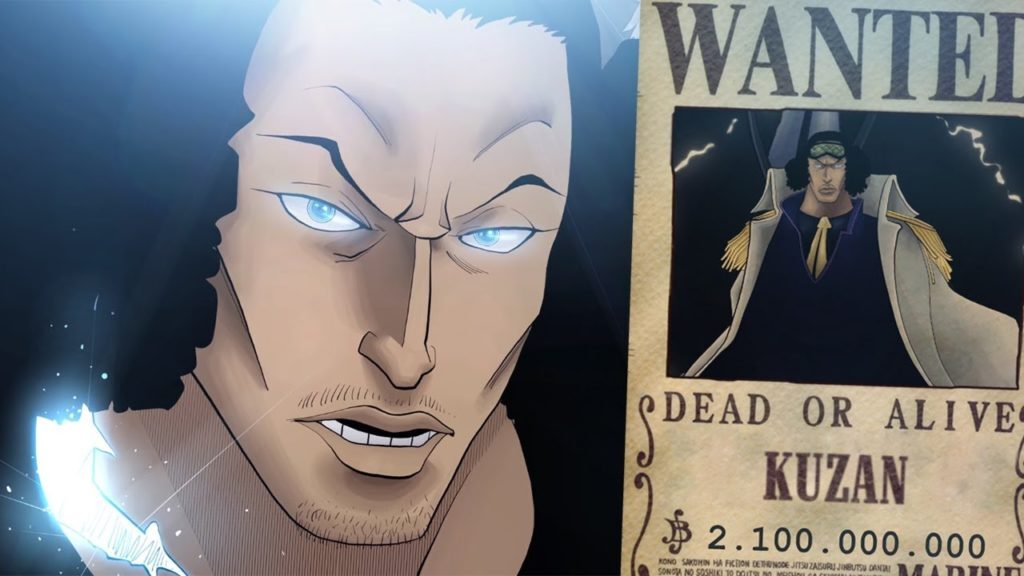 Aokiji resigned from the Marines, so they didn’t put a bounty on his head, but now that he is allied with Blackbeard pirates so sooner or later, he is likely to have a bounty, even though he hasn’t done anything yet, but the information he possesses is highly classified.

Aokiji doesn’t plan to evade Marines and become a nefarious pirate, but he will try to overthrow Sakazuki since his policy of absolute justice could lead Marines to a wrong path. Aokiji was a passionate Marine who believed in what is right, unlike Akainu with his ruthless attitude. It is believed that Sakazuki didn’t let Kuzan freely walk out of the battle for Fleet Admiral position, which took place on Punk Hazard island it could be that neither one of the two was willing to walk out of it, and after ten days of battle, Akainu was declared the strongest one. If Sakazuki were to kill his fellow comrade, then he will be labeled as a murderer who could put his position in jeopardy. Now Kuzan can only become fleet admiral if Sakazuki is demoted, overthrown, or death which is not likely to happen after the Marine Ford Arc.

Aokiji has faith in Luffy that he will fight Akainu in the future at some point, and it will lead to Akainu’s death or his demotion. The Five elders, who are also known as The Gorosei cannot afford someone of Akainu’s level to be defeated, which could make the Navy potentially weak, and they will need a new Fleet Admiral. The question arises how will Aokiji become fleet admiral, right now, he is an ally of Blackbeard pirates and knows a lot about the crew. It could be the case that Aokij would aid Luffy in his fight with Blackbeard with a condition that he will deliver Blackbeard Pirates to The Gorosei, which would put him in the position of Fleet Admiral, which is the same position as Akainu having to directly answer to The Gorosei, this is the part in this theory where Aokiji’s plan completes.

Now he is allied with the Blackbeard, but it is a possibility that he could’ve convinced Dragon to overthrow The World Government when he becomes Fleet Admiral, which does make sense considering his hatred towards the World Government and their way of doing things.

As soon as Dragon makes his move on The World Government, they would make Marines protect them, but now the command would be with Aokiji, he has direct control of Marines, so he has the ability to deny the World Government leaving them powerless and ripe for the taking by The Revolutionary Army. Even though it’s just a theory, it is the only one that makes the most sense out of the theories that are out there.

You can watch One Piece on Crunchyroll.

Also Read: How Did Shisui Get His Mangekyou Sharingan? Complete Story Arc

Why did Pain kill Jiraiya? Legendary Sanin Fell in Battle

In the Heart of Kunoichi Tsubaki Anime: Release Date & Preview

In the Heart of Kunoichi Tsubaki Anime: Release Date & Preview

Zara Larsson Boyfriend: Who Is the Swedish Sensation Dating in 2021?

Would You Like a Cup of Coffee? Episode 3: Release Date & Spoilers

The Lady and the Dale Season 2: Release Date, Renewal & Plot