As Dickinsons pays respects at a soldier's memorial, Emily plans to stick them together in Dickinson Season 3 Episode 8. 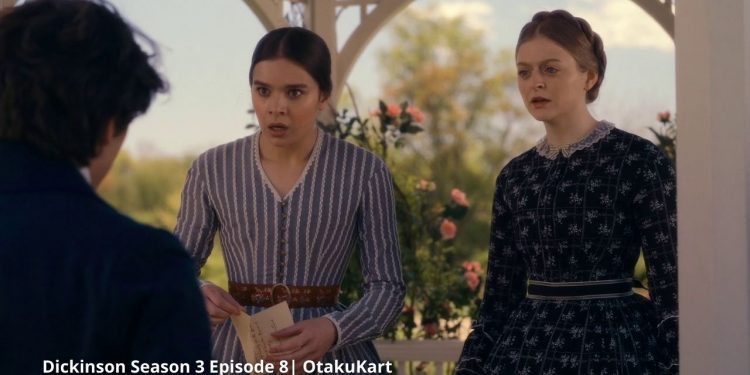 Dickinson Season 3 Episode 8 sees a fallen soldier’s memorial and Emily going all inferno. But before we moved to the same, Emily had a lot on her shoulders since Susan found out about her writing to someone else. She had been sending her poems to Colonel Higginson, who now wants to meet her. Susan wanted Emily to meet her and talk to her. When she didn’t, she decided to go all by herself to confront her. Susan also confessed everything she wanted from Emily, but Emily wasn’t sure about that.

Somewhere Vinnie was sad about her life as well. Emily felt that, and a request was granted. Emily and Vinnie were sent 100 years into the future. What they saw were wheels running without horses and newspapers suggesting the year 1955. They met another great poet who spoke highly of Emily and told her the path she would be walking upon in the coming years. Here is a complete look at the episode that took Emily and Vinnie into the future and what it means for Dickinson Season 3 Episode 8.

Previously on Dickinson Season 3, we opened up with Emily reading another letter from Colonel Higginson. To know more about her, he now wants to meet her. Sojourner Truth is encouraging Betty to go out there and start dating again. It could be anyone and the best man they saw in front of their eyes at that time was Freddie. She encourages her to go out with him. Reluctantly, Betty agrees and goes out. Emily had to go fetch water and found Susan waiting for her there.

Susan confronted Emily for not coming to see her after what went down between them. Emily wrote someone else broke her. Susan confessed that she wants more than the poems. She wants a relationship which Emily is reluctant at this point despite loving her. Emily walked away and later found Vinnie crying wanting a husband, and Emily herself hates this time and wishes to go to the future. Universe heard her request as it immediately started raining and thunder roared. The lightning struck the Gazebo they were sitting on, which spun and sent them around 100 years into the future.

Emily and Vinnie saw cars that scared them at first and went to their house to find a newspaper that suggested the date of 1955. They were trying to understand the scenario until a woman came talking to them. The woman was none other than American Poet Sylvia Plath. She told them a lot of Emily Dickinson and how she goes on to become a Great American Poet, her books that were published and a lot more. A few secrets of her also came to light that included the fact Emily loved women. Vinnie was shocked and wanted to know if it was true. Emily decided to bail instead.

Vinnie confronted Emily again, who spilled the beans. Yes, she does love Susan a lot. At that point, Emily missed the present, and universe heard it again, sending them back to 1862. Vinnie forgot everything except for the part where Emily confessed her love for Susan. The episode came to a close, with George bringing the news of Frazar Stearns’s death.

Dickinson Season 3 Episode 8 is releasing on 10 December 2021. It is titled, “My life had stood – a loaded gun -“. The official synopsis of the episode suggests its a soldier’s memorial. Emily tries to hold her family together at a time where they are losing all the hope they had. Even if it means if she has to cross the limits. Apart from that, will Emily finally come out with her love for Susan after what she saw in the future is another question to look at.