The luck finally came to help Bhuvan's family but Mr. Hola was right at the footstep to meddle with it. Will There Be a Dhindora Season 2 to tell us his plans? 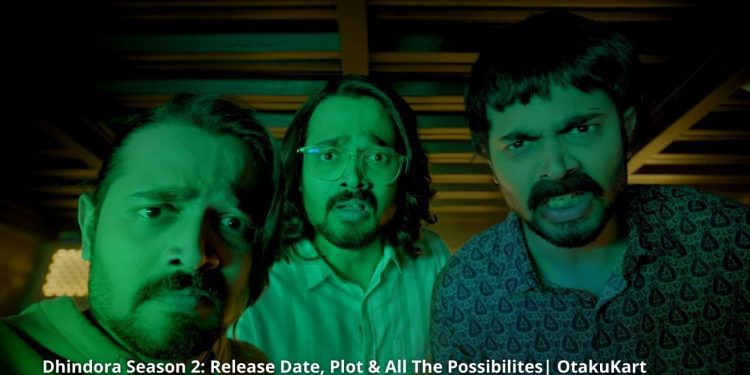 Well, the man who began making videos playing every character by himself to make the audiences laugh on YouTube has certainly seen tremendous growth since his Google Nexus days. Today, the story Bhuvan Bam began back in the day has turned into a full-fledge YouTube series titled, “Dhindora”. Thus, giving us a bigger world to short stories we have been watching in his videos for the past 6 to 7 years now. Dhindora broke out to be a major success grabbing millions of views. It recently wrapped up its first season teasing there is more to tell and we wonder if there is a possibility of Dhindora Season 2 to continue the same story.

So coming to the circle of the first season’s story, Bhuvan Bam gave us a story of hope. A story told from the view of Bablooji, his son Bhuvan, his wife Jaanki, and their family and friends. The same hope every middle-class working family looks for but the moment they get them. Well, a hard-luck takes it away. So before we break down the possibility of Dhindora Season 2, here is a look at everything that went down in Season 1.

Dhindora told the story of Bhuvan and his middle-class working family in Delhi. As they go through their daily routine, they also dream of climbing up the ladder of the chain they are in someday. To earn better and live the life they dream of. Bhuvan hopes to make it in music someday. Bhuvan’s father Bablooji on his side hopes for promotion on his job. The same day, Bablooji’s boss does give him one but at the same time, lowers his salary Thus, leaving Bablooji’s heartbroken.

Things take a new turn when Bablooji helped a lottery seller by buying his lottery. Surprisingly, Bablooji hit that lottery. He manages to inform his wife Jaanki but before he could reach his son Bhuvan, he is hit by a car. While Bablooji recovers from the accident, Jaanki already sent a huge word of mouth about the lottery. If that wasn’t enough, she also promised to help many of the people in their colony.

Jaanki’s word of mouth also included Titu, her brother. Things were quite tense on Titu’s side as his own best friend, Bancho’s father Papa Makichu had captured him. Titu was in huge debt and he needed to pay Papa Makichu as soon as he can. The lottery only made it a little easy for Papa Makichu to let him go. Amidst all of this, Bhuvan and his best friends Bancho and Sameer Fuddi worked to crack what really went down. Was that really an accident? Since the driver ran as quickly as he can. Bablooji did wake up but later on and everyone had the same questions but he had lost most of his memory.

Bhuvan, Bancho, and Sammer received a tip from Detective Mangloo. They gave the person who might be the man behind Bablooji’s accident a chase. Turns out, it’s none other than Titu Mama. So, a flashback told Titu Mama did hit his father-in-law and it was actually an accident as he was on the call. The running away made Jaanki and his own Nephew doubt if it was an accident. It broke Titu Mama as his loved ones decided to turn their backs on him.

Bancho and Sameer comforted Titu Mama and even Bhuvan realized his uncle would never dream of this. The trio of friends and Titu Mama joined forces. A CCTV footage revealed that it was Mr. Hola, their lifelong enemy who was behind this. It wasn’t an accident but Mr. Hola pushed Bablooji in front of Titu Mama’s car. The group took care of him in their own way. Titu Mama’s name was cleared as he wasn’t behind the accident.

Coming to Bablooji, Bhuvan finds out that he never lost his memory. He was fine since the very day he woke up in the hospital. Also the lottery he hit only give him a refrigerator as a prize and not a lot of money. The revelation broke everyone’s heart. First of the community as they were hoping for development. Then Bhuvan’s as he was planning to leave the country to learn music and stay with his girlfriend Tara, who was also pursuing further education. She is also the doctor who also treated Mr. Babloo. Titu Mama’s too as he couldn’t pay Papa Makichu’s debt and may get killed. Lastly, it was Janaki as well as she promised everyone that she will help them with this money.

Badluck followed the next day with Bablooji losing his job. Then, he came across the same lottery seller. Initially, he was angry at him but they got along. He bought the ticket again to make friends with him and with some false hope. This time the lottery was real. Bablooji got it. The only thing is they didn’t make a ruckus out of it. At the end of the day, they helped everyone they promised within a month.

Bhuvan left with his girlfriend on a flight to pursue music abroad. Sameer became a pilot while Bancho got his dream bike. Lastly, even Titu Mama paid his debt and the community problems were solved. Season 1 of Dhindora came to a close with Mr. Hola knocking on Jaanki’s door with a knife in his hand that has blood on it.

Dhindora Season 2 doesn’t have a release date. At this point, there are no official announcements on whether Bhuvan Bam, the creator of this series wants to continue the show. Only the closing moments of season 1 are something that hints that there is another story to tell and it’s not all over. Also if we look at its popularity, the show is undeniably a hit with wide applause over social media. Being released on YouTube for free, the episodes have gathered 14 to 55 million views at this point. So there is a high chance the show may continue.

So, if we assume Bhuvan Bam does want to continue with Dhindora, the best-expected release date for it would be October 2022. At least that’s what we believe unless Bhuvan Bam hopes to continue working on YouTube with his short videos telling the story of the same family. If not that, he also seems to have a lot of different projects that majorly include his musical career. That’s all for Dhindora’s release date for now and we may have to wait to hear it from Bhuvan Bam himself for further information on the same.

Dhindora Season 2 Plot & What Can We Expect?

Bablooji’s hope for climbing the ladder of dreams with hard work and the lottery played a huge part in Dhindora’s Season 1. It was luck that didn’t play well with him and when it did, people like Mr. Hola wanted to mess with it. Despite everything working out for Bablooji, Bhuvan, Jaanki, and their family and friends, Mr. Hola decided he won’t sit quietly.

So we know that Mr. Hola came with a knife with blood on it to knock on the door of Jaanki. The Knife with blood certainly suggests he might have stabbed someone recently. There is a high chance this could be Bablooji as he was the one who has always been on his target if not Bhuvan and his friends. Especially with the fact that Bhuvan is abroad studying music, Mr. Hola definitely couldn’t hurt Sameer and even Bancho if he is with Sameer. Lastly, not a chance with Titu Mama as he knows all the ins and outs of taking care of people like him.

So, coming down to the circle, we are not betting that Mr. Hola could have killed Mr. Babloo. If we are to predict, he could be planning to kidnap Bhvuan’s parents while he is away. This may leave Titu Mama, Bancho, and Sameer up for the job to make sure they save their nephew as well as their best friend’s parents.

For a show titled, “Dhindora”, Season 2 might take Titu Mama, Bancho, and Sameer on a trip of not making chaos about the kidnapping. For Bhuvan, he may somehow find out and return to save his only family. When this trio and Titu Mama are together, they may work things out. They might have to investigate and take help from the likes of Detective Magloo and even Papa Makichoo if required. What are the intentions of Mr. Hola remains a question for Dhindora Season 2.

Bhuvan Bam, the creator of Dhindora remains the major player for most of the cast and we expect the same for Season 2. So he is definitely expected to fill in the shoes for his memorable roles. This includes the likes of fictional Bhuvan Bam, Bablooji, Jaanki, Bancho, Sameer Fuddi, Titu, Detective Mangloo, Mr. Hola, and Papa Makichu. Apart from Bhuvan Bam, we only expect Gayatri Bhardwaj to return as Dr. Tara for now.

Also Read: Indian Youtuber Bhuvan Bam Meets The Cast Of Money Heist – Know All About It

Tiktok vs Youtube Fight Boxing: Here’s what we know