Dex Fights For His Life in Dexter: New Blood Episode 8 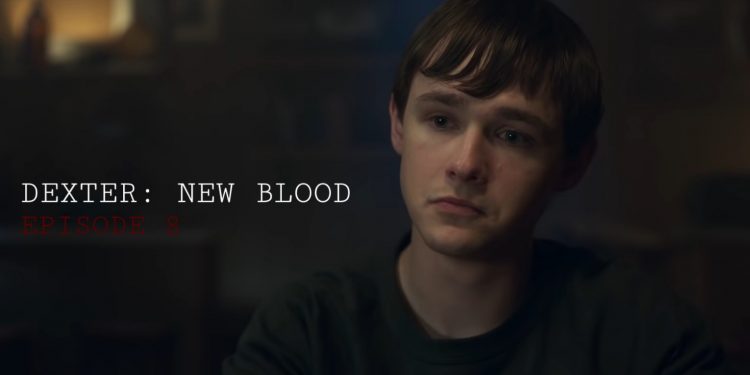 “Dexter: New Blood” Episode 8 airs this Sunday, with the story picking up the pace before it concludes on the tenth episode. Dexter is still in captivity, trying to break free as soon as he can. The next episode will see him break free of his binds and make a run for it. However, the chase hasn’t stopped, and he will have a confrontation at an abandoned place in the woods. So we can expect plenty of frenetic and intense chases. Meanwhile, Angela’s investigations have also sped up, and episode 8 will see her making a big discovery. Elsewhere, Harrison is facing an internal struggle of his own.

The show follows the titular character after the events of the original series. Following his supposed death, Dexter moved to the fictional small town of Iron Lake, New York. He now lives a normal life under a fake identity, as the local outfitter’s shop worker — Jim Lindsay. He’s also in a relationship with the police chief Angela Bishop. While he leads a life devoid of his killings like before, it can’t be long before he might give in to his serial killing urges. The story begins when his son, who’s now a teenager, turns up looking for him. He has lost his mother, Hannah, who succumbed to cancer.

Let’s now delve into all that episode 8 of “Dexter: New Blood” will entail. Spoilers ahead!

Episode 7 begins with Dexter assuming back his CSI role and diagnosing the reason behind Iris’s death. He makes a major breakout when he finds skin on her teeth. It is good to track down the killer through the DNA. However, it’s still not plenty enough, and Dexter tells this to Angela. Additionally, he also finds out that Iris was still alive when her killer buried her. Angela tells Dexter she thinks it’s Kurt.

Back at home, Dexter sees Debra, who tells her to kill Kurt. However, Dexter doesn’t want to, yet. He wants Angela to continue her investigations. Later, Dexter and Angela examine the cabin in the woods. The signs point to someone having been dragged in there. There’s also this stench of bleach that the cabin is emanating.

Meanwhile, Dexter and Harrison’s relationship is still riddled with strains. Later in the episode, Harrison is fighting with a group of bad guys, and he goes in for a serious attack with his razor. However, Dexter arrives and dampens the intensity, eventually dissipating the danger, saving his son from the boys and himself. Dexter tries to talk to Harrison, but he takes off after getting pissed at his father.

Kurt Gets Released & Dexter Gets Jumped

He also reveals that he remembers the Trinity killer and his mother’s murder. Meanwhile, Angela arrests Kurt based on the DNA recovered from Iris’s corpse. However, it’s only a 67 percent match. Kurt takes advantage of this and says it must be his father, who was an abuser, according to him, who killed Iris. Helpless and out of options, Angela can’t do anything as Kurt is released. The episode ends with Kurt’s hired man Elrick Kane jumping on Dexter from behind.

“Dexter: New Blood” Episode 8 will release on December 26, 2021. The official synopsis teases some thrilling action ahead of the soon to arrive finale. After freeing himself of the binds, Dexter will be zooming into the woods. There he must fight for his life, which will eventually lead to an inevitable confrontation in an abandoned summer camp. Meanwhile, Harrison is facing significant conflict regarding his two guardian figures.

Torn between two father figures, Harrison is contending with the struggle of potentially having to choose one and go down the path that the decision will entail. Meanwhile, Angela continues to dig more and more. The next episode will see her make some disturbing discoveries. Titled “Unfair Game,” the episode is directed by Sanford Bookstaver, with a teleplay from Tony Saltzman and David McMillan.

“Dexter: New Blood” airs on Showtime every week on Sundays. New episodes become available online the day after they air on TV. You can watch the show online on Showtime’s official website. The streaming site offers a 30-day free trial before you opt for a full-fledged commitment with a $10.99/month subscription. Live TV services such as Sling TV, Hulu, and Fubo TV can let you watch the show with a Showtime add-on.

The UK viewers can watch “Dexter: New Blood” on Sky every week on Mondays. Canadian viewers can enjoy the show through the streaming platform Crave. The service offers a 7-day free trial before you select a monthly subscription starting from $9.99 per month. The viewers in Australia can watch the show online on Paramount+.