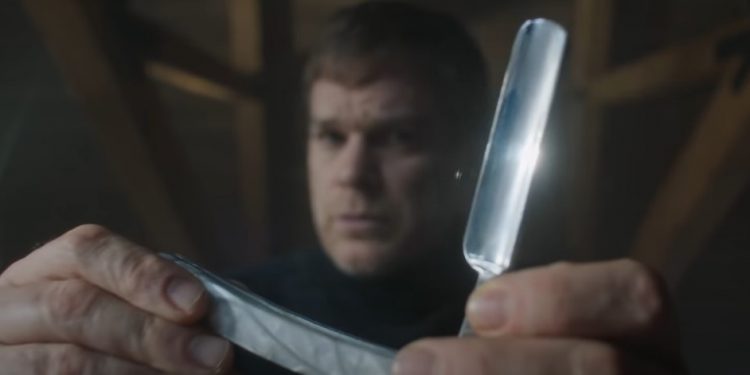 Ten years after TV’s favorite serial killer took a break from doing what he does best. He’s back! And now he lives out in the sticks. Way out there in Iron Lake, New York State, working at a fish and game joint. Old habits die hard for psychopaths. And as we will see in Dexter: New Blood Episode 5, our anti-hero is coping with his favorite vice, killing people for the kicks of it. As we saw in the past episode, Dexter got confused at Kurt, saying that his kid is alive and believes that he’s just a father dealing with the process of grief.

Deep down, Dexter knows that Kurt is lying. All the while, Harrison is now the hero for being attacked by Ethan, who plotted in murdering some students. But it turns out for everybody that it was Harrison was the one who went for Ethan. And he used a straight razor. All these things we will further expand in the recap for the episode, so stay with us here at Otakukart as we share with you the details for Dexter: New Blood’s upcoming episode.

Dexter: New Blood Episode 5 will release on December 5, 2021, on Showtime at 9:00 PM, Eastern Time, United States. Secondly, this week’s episode will be titled “Runaway”. Thirdly, this debut season of the Dexter reboot will consist of ten episodes. And for those viewers who want a show that won’t take a Christmas pause, Dexter: New Blood is one of them. The series will have episodes all along December. They are making it a very attractive show for Showtime, ratings-wise.

Where to Watch Dexter: New Blood?

The fourth episode of ‘Dexter: New Blood’ is now airing on Showtime. Viewers with a paying Showtime membership may also watch prior episodes on the Showtime website or the Showtime app. Furthermore, the program is available on platforms such as Fubo TV. Sling TV, Hulu+Live TV, DirecTV, Xfinity, YouTube TV, and Spectrum. Furthermore, users may subscribe to Showtime to their Amazon Prime Video membership to watch episode 4 of ‘Dexter: New Blood.’ Finally, the program is accessible on Crave in Canada.

It’s interesting how Harrison seems to be maturing into a “strong and respectable” young man with an inherited dark streak. Unfortunately, taking everything we’ve learned from episode four into account, it seems that the black stripe is casting a rather large shadow over anything approximating solid. The respectable element, on the other hand, is up to interpretation. Harrison is settling into his new house near Iron Lake, New York. When a person becomes at ease, their actual nature emerges from behind the mask of civility that they wore while acclimating.

Harrison seems to be taking a different life path than his father after meeting Ethan, the awkward misfit of his high school, and rescuing him from a beating by Zach, one of a gang of bullies who’ve abused Ethan for years. Even the ghost Deb believes so. But Dexter/Jim is wiser. Nobody else sees what he sees in his son Harrison. He recognizes himself – both the disguise and the open face underneath it.

In episode three, a popular podcaster sniffing about town first appeared as a “citizen activist,” asking to help with the search for Matt Caldwell. Her nosy and cheerful approach was immediately off-putting to Sheriff Angela Bishop, and it gets even more so when Angela realizes that the “citizen activist” is really popular podcaster Molly Park (Jamie Chung), presenter of Merry F*cking Kill, which focuses on genuine murders of all kinds and sizes. With Molly in town and her actual name and intents revealed, Harrison becomes interested in her podcast and, while scrolling through the episodes, stumbles upon one about the Trinity Killer.

This is the man who murdered Harrison’s mother in the first Dexter series. The circumstances of this heinous crime are eerily similar to Dexter’s own mother’s death when he was a child. Both were present in the same room during the killings. And both little boys were permitted to sit in their mother’s blood and howl until help came. Harrison’s mother was sliced with a straight razor by the Trinity Killer, which is now Harrison’s preferred weapon in his first (that we know of) plunge into the same gory pool his father swims in.

A school shooting was foiled.

Something cracks when Harrison hears the Trinity Killer episode, and the line he was treading between hero and evil becomes increasingly difficult to follow. We show Harrison alone at school, listening to the podcast, and then we move to later in the day when Dexter gets a phone alert that the high school is on lockdown. Ethan is said to have persuaded Harrison to accompany him in a school massacre and then lashed out when Harrison refused, leading Harrison to defend himself. But later, thanks to Dexter’s investigation, we learn that Harrison took a straight razor to school and slashed Ethan’s leg to explore how it felt. He then wounded himself with a separate knife to make it seem as though Ethan had stabbed him, forcing him to defend himself.

Seeing the angle of Harrison’s wound and the telltale blood splatter, Dexter knows right away that Harrison is lying and gives him a chance to come clean, but his son defensively doubles down on the lie. Blood doesn’t lie, though. And now Dexter knows that he’s not the only one with a dark passenger, which makes him … happy? This family is nuts. Or, in the words of Deb, a bunch of f*ck nuggets.

A town of odd-balls

There is quite a large population of predators and weirdos for a town as seemingly minor as Iron Lake, New York. There’s Dexter, doing whatever the heck it is he’s doing. Also, there’s a fully sentient ghost with a flair for theatrical montages. There’s Kurt Caldwell, who is making up tales about his deceased son while also possibly slaughtering young women in his doo-wop dungeon. And there’s Harrison, who’s out there chopping nerds and devouring breakfast items in the most deranged manner I’ve ever watched. To the townsfolk of Iron Lake, I’d suggest, maybe consider a move? Brooklyn is great.

The price increase is justified. Historically tiny villages are physical magnets for oddities and murderers. Wooded areas provide extra space and breathing room, but they are also a prime location for someone looking to hide. Kurt Caldwell, on the other hand, has something to hide. At this point, anyone’s guess who is responsible for kidnapping and murdering the young lady previously known as Hamburger Girl, but this episode strongly suggests Kurt. However, Edward Olsen remains a possibility as either a false herring or a genuine perpetrator.

We learn more about Kurt’s motivation for claiming to have FaceTimed with his deceased son Matt, as well as ghosts. Deb explains her ideas to Dexter. Deb thinks Kurt believes Johnny Bullhorn murdered Matt for shooting a white deer on Seneca property. And is attempting to create a diversion so he can discover and destroy Matt’s murderer himself. Deb tells Dexter that this would ultimately bring Kurt to Matt’s actual murderer, Dexter himself. But he doesn’t seem to be concerned.

The problem with Kurt

Kurt appears to enjoy doing favors for mischievous women, indicating that he is either a genuinely nice guy or a demented pervert. Toss-ups of this type usually go in favor of the latter. Dexter/Jim notices Kurt conversing with a female with green hair inside the Filling Station cafe and gets a feeling from her. Most likely for a good reason. We later see the same girl return to the diner to ask Kurt for money after she has spent the money he previously gave her on food and a new coat.

Kurt instead offers her a job at the diner to earn her own money, and we see him drive her off to a cabin in the woods with a basement entry/exit similar to the one Hamburger Girl escaped from in episode three. It would be unusual for a show to just hand you a solution like that, so this is most likely just postponing the fact that the killer is Edward Olsen or someone entirely different. But who can say? For a show that started out as a shitshow and is now turning into something enjoyable to watch… anything is possible.