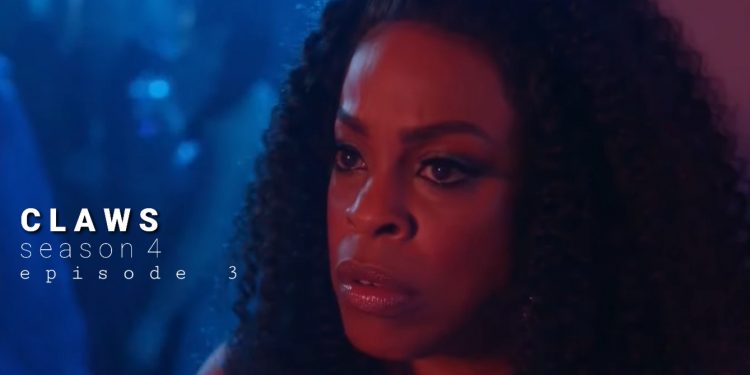 “Claws” Season 4 Episode 3 will be all about Desna’s new business plan going into motion. She has now ventured into a multi-level Oxy sales operation. This significant new operation entails many lucrative opportunities. However, at the same time, Desna’s operation will also meet plenty of challenges. These challenges range from the dodgy power dynamic and how her crew has to employ to the inevitable tension and friction that such an operation will involve. They have to manage a criminal enterprise from the top and that’s not exactly going to be smooth. The fourth episode will drop simultaneously with the third episode.

From all that the official synopsis of episode 4 tells us, we’re in for a ride! There will be conspiracy, investigations, and reveals. Meanwhile, it also seems that Desna will be gearing up to play dirty. The official promo shows Desna and Ann having a confrontation. Things are going to get intense as Desna tries to handle her new business operation and Ann and Uncle Daddy try to take their pieces. Meanwhile, Ann also appears to take a new route and give it to Desna and Uncle Daddy both. We see her talking to the police so she might become an informant soon. Let’s see how that pans out for Ann and how Desna contends with the chaos.

Let’s now delve into all that episode 3 of “Claws” season 4 will entail. Spoilers ahead!

Episode 3 of “Claws” Season 4 will release on December 26, 2021. Titled “Chapter Three: Ambition”, the episode will be about Desna’s venture into her new multi-level Oxy sales operation. For this new business, Desna will employ some of her most loyal clients as dealers and recruiters. Meanwhile, as the business starts rolling, the crew will have to contend with the challenges that come with it. The tensions will soon begin rising and the crew will have to navigate difficult terrain while managing the criminal enterprise they’ve started. The official promo for episodes 3 and 4 is replete with chaos and the fun that will ensue.

“Claws” Season 4 Episode 3 will air on TNT as per its schedule, at 9:00 pm ET. You can watch “Claws” online on Hulu. Seasons 1 to 3 are currently available to binge on the streaming platform. If you don’t have access to Hulu, you can also rent or purchase individual episodes as well as seasons of “Claws” via VOD platforms like Google Play, VUDU, Amazon Instant Video, and iTunes.

Episode 1 of “Claws” season 4, titled “Chapter One: Betrayal”, sees Desna returning to her roots. With the casino gone, she has plunged back into the world of money-laundering nail salon mogul. However, the return proves to be way difficult than she anticipated. These unprecedented developments gradually push her and the crew further into the criminal world. Episode 2 sees Desna’s new foray into the drug world getting impeded by none other than Uncle Daddy and Quiet Ann.

The episode begins with Uncle Daddy ravaging the salon in search of his pills. Meanwhile, Desna is planning to remove Ann and replace her with someone else. She has also bagged a place at the Coddlefest, lucrative for her since there will be some big-time customers. Elsewhere, Polly meets Ann who tells her that she now works for Uncle Daddy. Polly mistakenly reveals the thing about Coddlefest. Meanwhile, Bryce is having a problem with Clay who tells her to stop Jenn from working with Desna. By the end of the episode, he fails to do so.

However, he scores some time-release patches from his prison cellmate back in the day. Ann, learning about Desna’s plan, crashes the Coddlefest with Uncle Daddy. They try to steal Desna’s money initially. However, it proves to be difficult. Later on, Uncle Daddy manages to steal her cash. The ending of episode 2 also sees Desna telling Virginia to replace Ann with Georgia. Desna also has an epiphany following a love-making session with a delivery driver. The sex toys he delivers give Desna an idea, which probably involves selling drugs through sex toys.