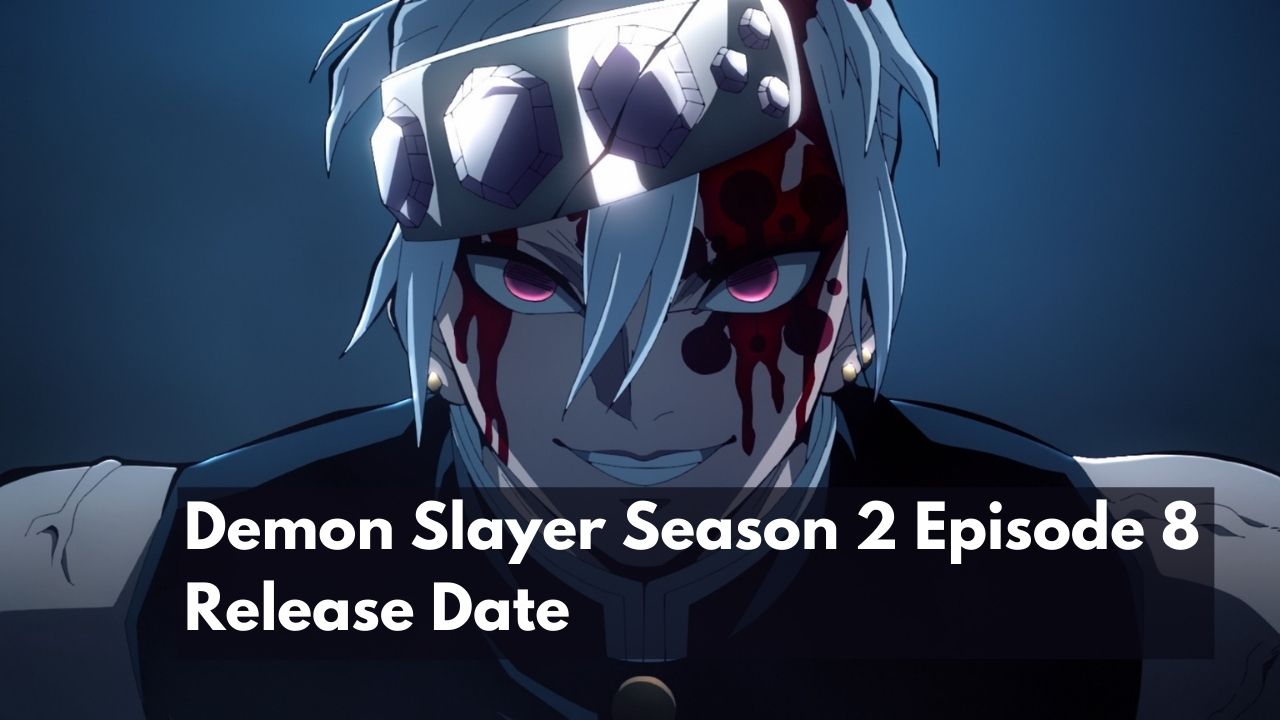 The Demon Slayer’s Entertainment District Arc is now at an exciting as well as anxious point. And fans are eager to learn about the Gyutaro’s fight with our favorite demon slayers in the forthcoming episode. This post will have everything you need to know about Demon Slayer Season 2 Episode 8. But you don’t have to worry. It won’t have absolute spoilers but hints on what you can expect, including its release date.

While the Entertainment District Arc has provided several memorable moments in the anime so far, such as Nexuko’s Awakened form, the last episode of Demon Slayer demonstrated Nezuko’s real might. Furthermore, the episode also revealed another demon, Gyutaro, as the actual possessor of the Upper Moon rank 6. Season 2 of Demon Slayer is shaping up to be the finest new season of the year!

Its seventh episode undoubtedly plays a part in why we make this bold remark since we not only saw epic, spine-chilling combat in the most recent episode, but we also witnessed the season’s most action-packed perceptible storyline with a twist so far. If you missed this action-packed episode, you are missing the character developments. Especially Tanjiro’s fight with the demon has proved how the characters have improved their strength and power from the Mugen Train arc when they couldn’t save Rengoku from dying or routing the Upper Demon completely.

As planned, Demon Slayer Season 2 Entertainment District Arc episode 8 will be released on January 23rd, 2022. The episode is named “Gathering,” and we expect to see Uzui and Gyotaru battle. Given that the two are among the anime’s most vital characters, the struggle will be violent.

Fans of the anime will view the forthcoming episode on Crunchyroll, Funimation, and Netflix. In terms of release date, Demon Slayer Entertainment District Arc episode 8 of Season 2 will be available at these times across the globe. If you’re looking for time zones that aren’t listed here, you can find them here.

Several netizens have expressed their dissatisfaction with the depiction of one of the series’ characters. The character design for Nezuko has sparked controversy, with some claiming that an adolescent figure was being sexualized.’ Many people are calling for the popular program to be canceled.

While the narrative of Demon Slayer concentrates upon Tanjiro Kamado’s quest to become a demon slayer to revenge his family’s loss, his sister Nezuko also plays a significant part. Muzan Kibutsuji has converted the character into a monster. Nezuko had been angry at Tanjiro in previous episodes, resulting in a new demon form as her body increased. With her kimono still the same size, the figure now reveals cleavage, which is labeled as ‘inappropriate’ online. The fact that the figure is in her adolescence, between the ages of 13 and 16, has added to the controversies.

Here are some tweets you can refer to and tell us your opinion on the matter!

The woke mob is outraged over how an underaged Nezuko is "sexualized" due to her prominent cleavage in her demon form despite the fact that this is a logical consequence of her gaining a foot in height and a lot of muscle mass while wearing a kimono designed to fit a 12-year-old. pic.twitter.com/fe9J4F9Sos

I will not engage with any defense of Nezuko’s design that is “oh that’s her adult form.” Demon Slayer Season 2 has SUCH great art there is no reason not to do better here. Tengen’s wives are so dope, and their tiddyfication is just such lazy poor design. (2/2)

In the previous episode of Demon Slayer Entertainment District Arc, we saw Nezuko in her awakened form pounding Daki senseless. While Daki managed to escape Nezuko’s clutches, the latter had done enough harm. Nezuko, on the other hand, protected Tanjiro from Daki; but she succumbed to her demonic side, drifting farther away with each hit.

Also Read: How to Watch Demon Slayer Mugen Train Movie? Is it available on Netflix, Funimation, and Crunchyroll?

Tanjiro jumped just in time to stop Nezuko from eating human flesh for the first time in Demon Slayer Entertainment District Arc’s last episode. While Tanjiro was holding her back, Uzui emerged on the scene and killed Daki in the blink of an eye, instructing her to quiet up since she was not a higher-ranking demon.
Daki cries out to her brother after having her head hacked off, which everyone is surprised she didn’t die from. With the arrival of Gyutaro, the true bearer of the top rank six and much more potent than Daki, the tale took a turn for the better. However, we saw very little of Gyutaro’s abilities and blood demon art in the previous episode, and it’s Demon Slayer Entertainment District Arc S2 episode 8 that has us wondering how the tale will go.

This is all about Demon Slayer Season 2 Episode 8. The article will be updated with time. For more similar content, Stay tuned to Otakukart.