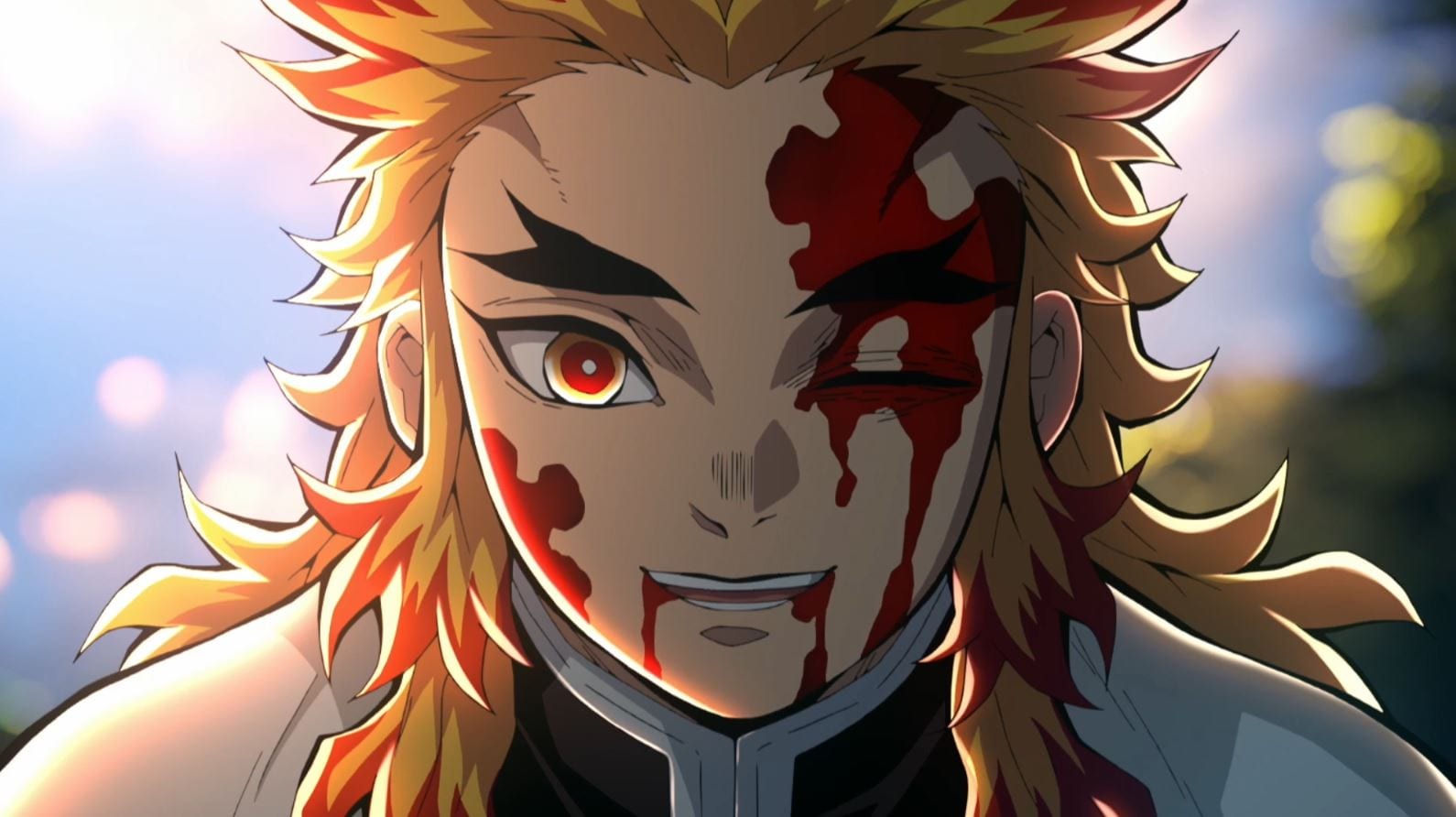 At the end of Demon Slayer Season 1, we see Tanjiro, Inosuke, and Zenitsu finish their rehabilitation in the Butterfly Mansion. After this, the trio, along with Nezuko, is sent on a mission to the Mugen Train. Here, over forty passengers have reportedly gone missing. So, this trio must investigate these disappearances while providing assistance to the Flame Hashira, Kyojuro Rengoku. As for Tanjiro, while on the mission, he must identify the unique power he has within him. For this, he is seeking to take advice from the Flame Hashira. But just like many anime that bring in an already existing character or a new character to provide character development, Demon Slayer doesn’t sly away from it as well. Manga readers know what’s been going on. So in this article, we will discuss does the Flame Hashira Rengoku Die in the Mugen Train?

From the moment the Demon Slayer: Mugen Train has been released, it has been breaking records. It has become the highest-grossing film of all time in Japan. While it is also currently ranked at 23rd in the highest-grossing R-Rated films of all time in the world. And this rank is only about to rise higher, considering the movie has been only released in selected countries. When the movie was first announced, the anime fans were excited, while manga readers had sadistic reasons. If you hadn’t come across this spoiler till now, consider yourself lucky. Either way, anime watchers are about to experience their first bit of sorrow within Demon Slayer. And sadly, this starts with Rengoku being the victim the first time around. While Mugen Train is a self-contained story within the manga, the impact of the events plants the seeds towards future installments.

What is Tanjiro searching for? 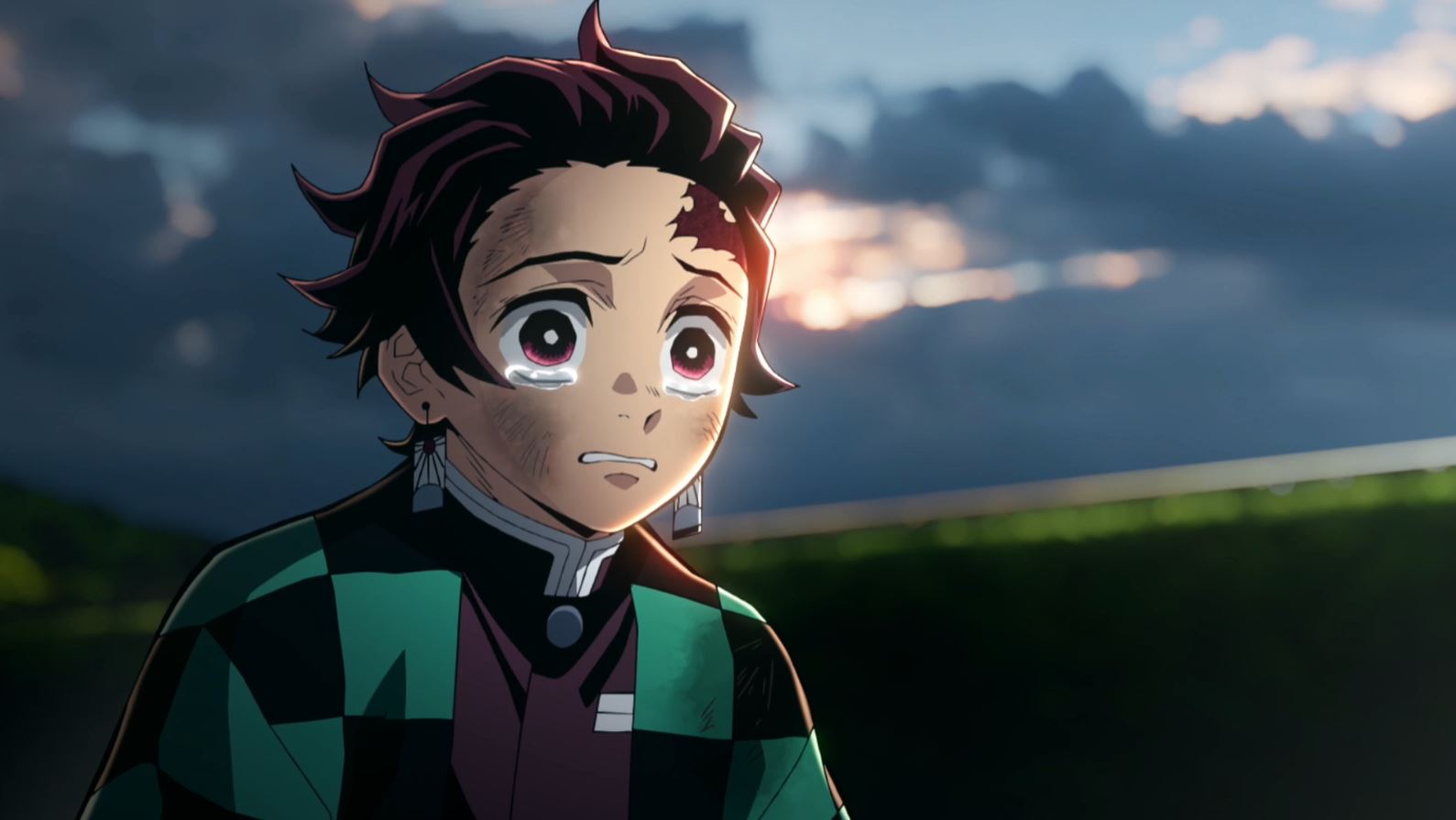 In Demon Slayer Season 1, we get a huge reveal in episode 19, where Tanjiro faces Rui. In the episode, unlike the Water Breathing Style, he learns from Sakonji, Tanjiro uses a breathing technique similar to fire. This happens after Tanjiro has a flashback of his frail father performing a special breathing technique during a ceremonial dance to the God of Fire (Hinokami Kagura). Just as he awakens from it, he uses the technique to slice off Rui’s head. Nevertheless, that flashback is the only information he has on the newly acquired technique, therefore he tries asking the Demon Slayers about it. They do not know as well, but considering that the technique is fire-related, he is advised to ask the Flame Hashira, Kyojuro Rengoku. But sadly, even he does not recognize the dance or the breathing form.

Does the “Flame Hashira” Kyojuro Rengoku Die in the Mugen Train? 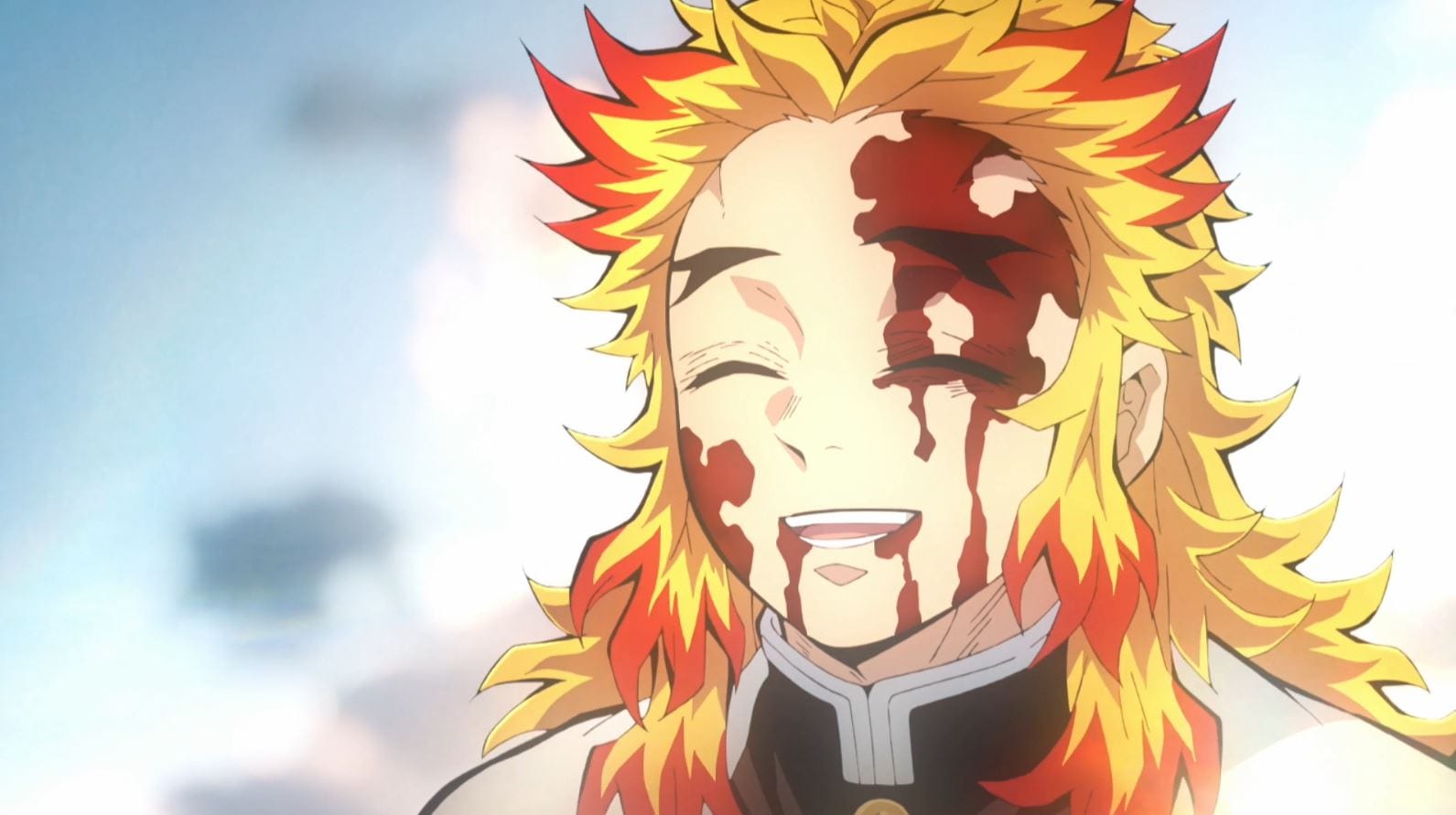 Kyojuro Rengoku smiles as he passes away.

Yes, the Flame Hashira, Kyokuro Rengoku, passes away in Demon Slayer: Mugen Train. The Demon Slayer manga readers can finally express their grief openly as the film has finally been released in the US as well. The grief stems from the death of a quick Kyojuro Rengoku, who quickly became a fan favorite. He was a very likable person showing great enthusiasm towards his duties as a Hashira. Even so that he initially disliked Tanjiro for not killing Nezuko while being a Demon Slayer. Cheerful and pure of heart as he was, Rengoku was an extraordinary swordsman with his technique stemming from his discipline. And from a very young age, his mother had instilled him to believe that the strong must protect the weak. Following this till his very last breath, Rengoku died protecting the passengers and his juniors.

How does the Flame Hashira Rengoku Die in the Mugen Train?

While our Demon Slayers are aboard the Mugen Train, they face multiple threats in the form of members of the 12 Kizuki, Enmu ana Akaza. Tanjiro and Inosuke face the Lower Kizuki Enmu and can defeat him successfully. After they do so, Tanjiro, who is heavily injured, is tended by Rengoku on the train. Just then, the duo is attacked out of nowhere by the Upper Rank 3 Kizuki member, Akaza. Rengoku does not waste a moment as he unleashes his Flame Breathing: Second Form – Rising Scorching Sun attack. Using this, he slices off Akaza’s arm in an instant. Using his regenerative abilities, Akaza spontaneously brings back his arm. At that very moment, he acknowledges Rengoku’s swordsmanship as he asks him to become a Demon, thus giving him infinite time to refine his technique. This doesn’t faze Rengoku as they start fighting with enormous speed. 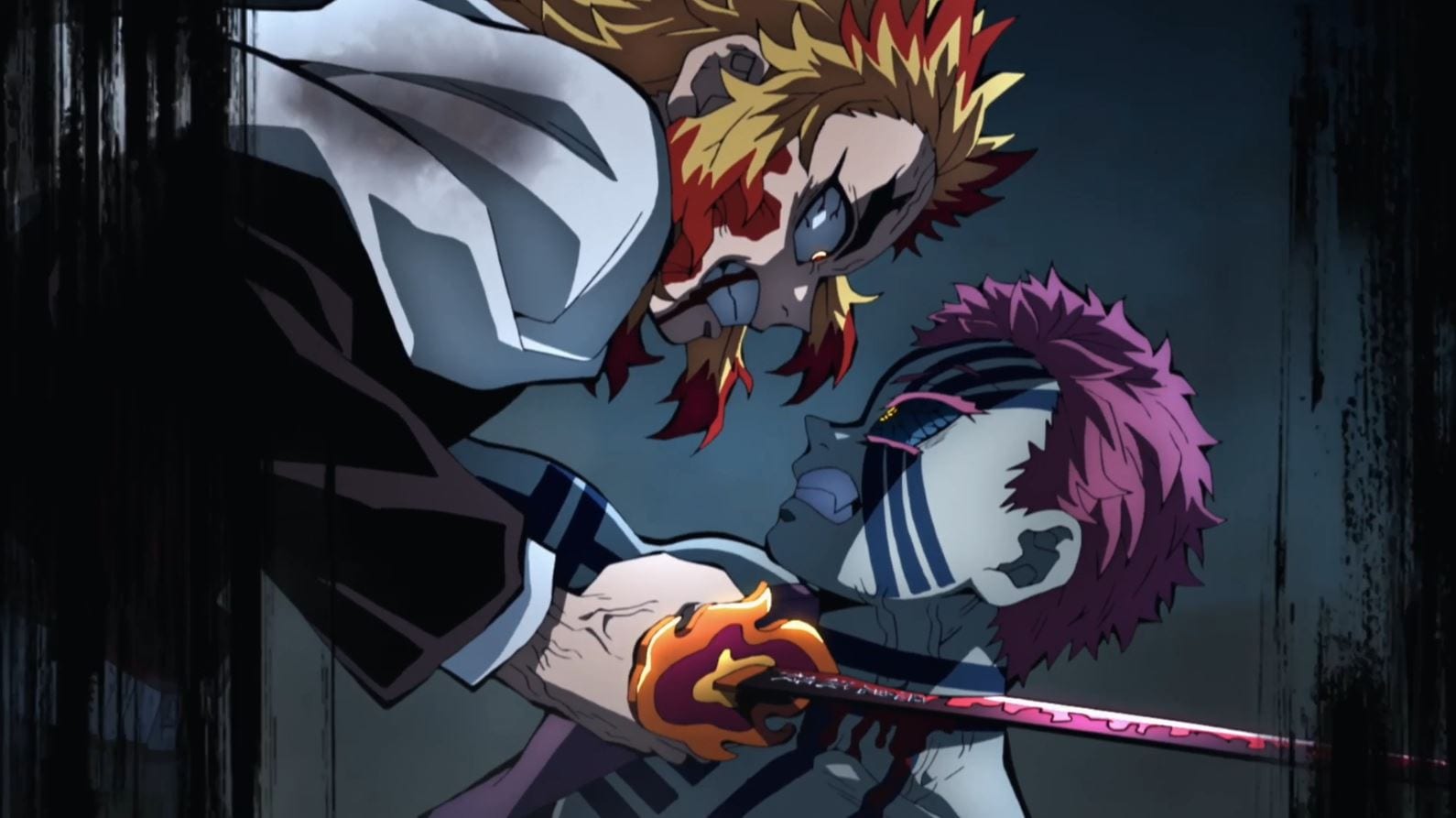 Rengoku uses his powerful swordsmanship while Akaza uses his raw strength for us to witness a fight invisible to the naked eye. Initially, the two are evenly matched, but soon Akaza takes the upper hand thanks to his regeneration. Both of their attacks clash as Rengoku uses his Flame Breathing: Fifth Form while Akaza uses Destructive Death: Disorder. The impact causes Rengoku to lose his vision while also creating an enormous smoke cloud. But Rengoku musters his strength to draw out a final attack. But this blow happens to be devastating as Akaza’s hand pierces Rengoku’s stomach bringing him to death’s door. However, Rengoku tries to drive his sword through Akaza’s neck while Tanjiro musters enough strength to deal a final blow. But seeing that the sun was about to rise, Akaza manages to flee, leaving Rengoku to die at the end of Mugen Train.

What were Rengoku’s Final Words? 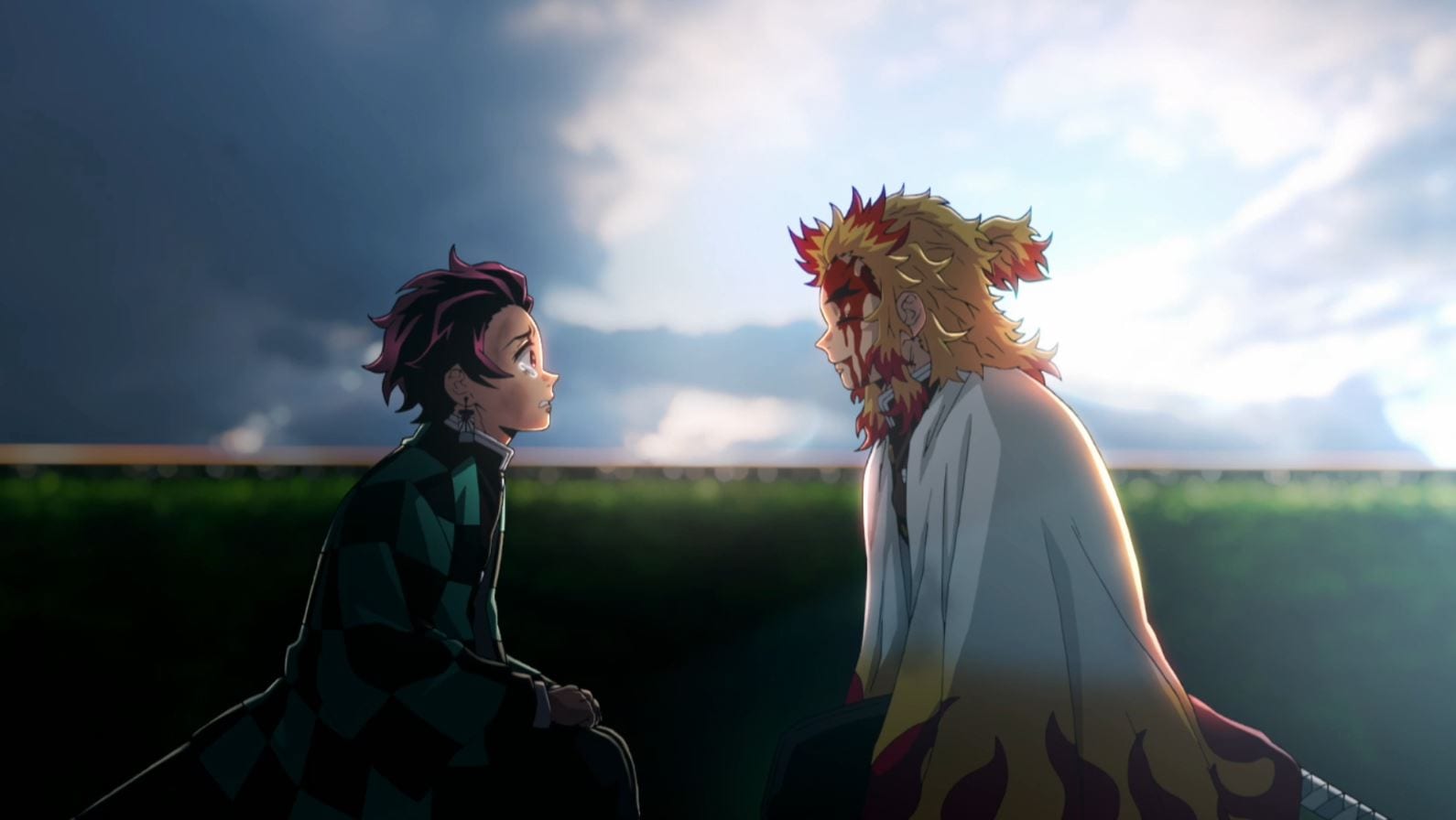 Rengoku and Tanjiro are having a final talk.

When Akaza manages to run away, Tanjiro is left screaming at his cowardice to run away. At that point, as Rengoku was drawing his final breaths, he asks Tanjiro to come to him. Rengoku suggests that Tanjiro should go to his Family Residence, where he may find some information on the Hinokami Kagura. Rengoku’s father had a few books written down by a former Flame Hashira. Nevertheless, he does not remember the contents of it. Tanjiro, who is worried about Rengoku, asks him to stop saying anything and try to stop his bleeding. But Rengoku knows that his death cannot be undone therefore, he wants to give out some final words. He asks Tanjiro to tell his brother Senjuro to follow the path his heart tells him to. While also asking his father to take care of his body.

Rengoku tells Tanjiro that he accepts his sister Nezuko as a Demon Slayer. He saw her shed blood while trying to protect the innocents in the Demon-possessed terrain. According to him, anyone who risks their life to do so, was a Demon Slayer who could have live their lives with chests held high. Rengoku asks them not to worry about his death as it was his duty as a Hashira to protect his juniors. He expresses how he believes in Tanjiro, Inosuke, and Zenistsu to become the next Hashiras who would do their duty in the same way. Just then, the Flame Hashira notices his mother’s spirit appear before him. As he remains speechless, he utters, asking his mom if he had done everything right, to which his mother smile and congratulated him on a job well done. As he hears this, a smiling Kyojuro Rengoku passes away. 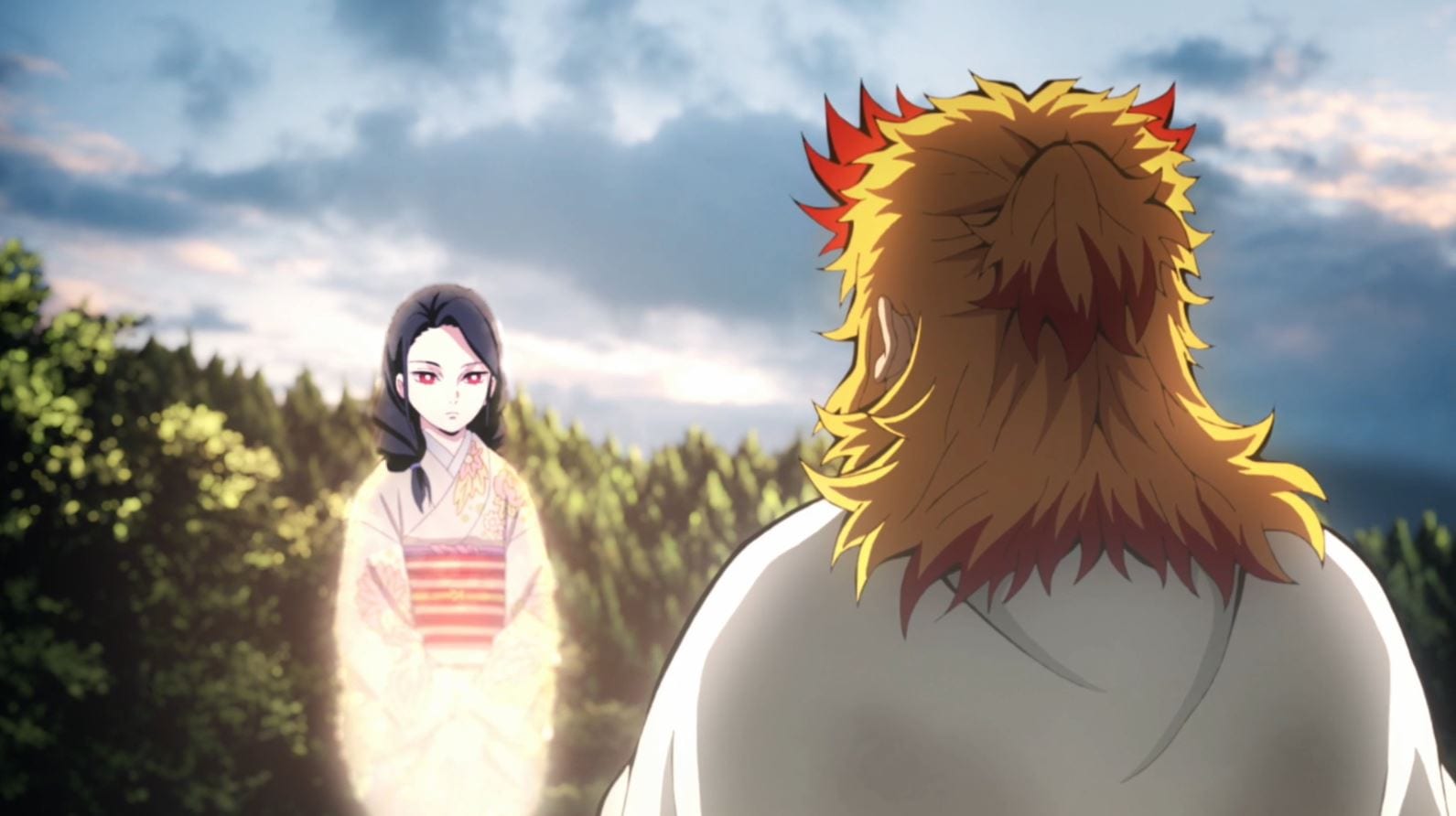 Rengoku’s mother appears before him.

How does Mugen Train set up the story for Demon Slayer Season 2?

Unlike most anime movies that tell an original story set apart from the manga and anime, Demon Slayer: Mugen Train continues directly after Season 1. And as Rengoku passes away, he asks Tanjiro to head towards his place to find answers to the Hinokami Kagura. This was a breathing technique Tanjiro’s father taught him. Considering that the technique resembles fire, it could have some information on an old book written by a former Flame Hashira. Now to follow Rengoku’s final words, surely Tanjiro and his group should head to his home at the beginning of Demon Slayer Season 2. This mission will see them delivering Rengoku’s parting messages for both his dad and younger brother.

As for the demons, Akaza was ranking 3rd among the six Upper Kizuki. And considering he was brought so close to his death should be enough reason for revenge. Akaza and Kibutsuji both have their own motives to take down Tanjiro. Therefore in the next season, we should see more Kizuki members try and take down Tanjiro and his group.