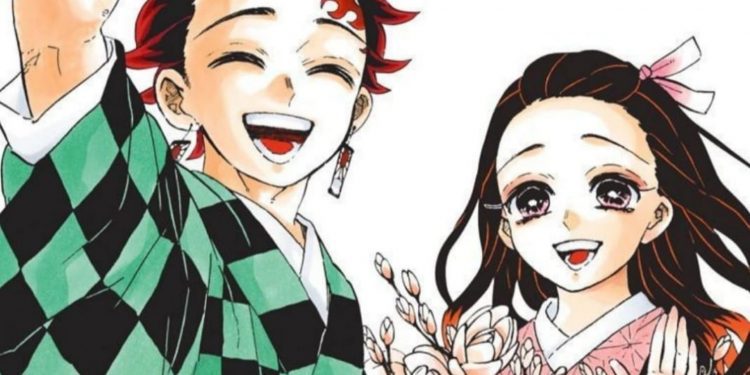 After so much anticipation by Demon Slayer fans, the wait is over. Demon Slayer: Kimetsu no Yaiba: Entertainment District Arc has been gaining popularity which seems to skyrocket. Demon Slayer is a manga-based anime written and illustrated by Koyoharu Gotōge and animated by Ufotable. The series has had its first season released in the year 2019, followed by a movie Demon Slayer: Kimetsu no Yaiba, the movie: Mugen Train. This movie, later compiled, has been made into the Mugen Train Arc, followed by the Entertainment District Arc.

‘After so many fights with demons, all the Demon Slayers will be at peace.’ Now don’t go on saying you didn’t know that this article would contain spoilers. After all, aren’t you here for that? So, with Demon Slayer having a huge worldwide fanbase of its own, some fans are just anime fans and not manga. They do not wish to read the manga mainly for two reasons: they do not want spoilers and/or they are not comfortable with it (some give up because mangas are difficult to read). If you are the latter one, then have a nice reading. And if not, have a nice reading too, because you wouldn’t regret knowing!

With the ending of the first season, fans have been desperate enough to know what will happen next. Following the movie and the second season, Demon Slayer has come a long way.

In the Taishō era of Japan, Tanjiro is set on a journey with his sister Nezuko, who is the sole survivor of the murder attempt by Muzan. They, along the way, meet people who are in similar situations and work together, relying on each other. Tanjiro, the main protagonist, has been trying to turn his half-demon sister, Nezuko, back to human again. His family was killed by Muzan, and Tanjiro is carrying on the family legacy, along with Nezuko. His will to keep his loved ones safe is so praisable that he, sometimes, carries all the burden by himself. As Tanjiro, Inosuke, Zenitsu, and Nezuko set out to kill demons and fight Muzan, the series will soon have its end too.

The most heartbreaking moment for all anime fans is when an anime series come to an end. Sharing all the love and life with the anime series is fun. But when it’s time to say goodbye to something we have dearly loved, it is hard. But there are series as such whose ending will bring peace to us and make our time worthy. Do you think Demon Slayer’s ending will bring you tears of joy or sadness?

Coming to the ending of Demon Slayer manga, let’s hope you will be joyed and not saddened! As the anime series is still in the Entertainment District Arc, there are a total of five more arcs that will be needed for the anime series to end. The last and final arc of Demon Slayer: Kimetsu no Yaiba is titled as Infinity Castle arc. The fight between Muzan and the Demon Slayers continues. Just when everyone let a sigh thinking the battle had ended, Tanjiro acted in a strange way. It seemed that he was taken over by Muzan. When the time came and dawn had arrived, Muzan was finally defeated.

With all the commotion going on, it was really hard for fans to stop themselves from not expecting more. Just when everything normalized, we expected more chapters of the protagonists’ later lives. The last panel, however, was completely not unexpected. From the Taisho period to the modern world, such a huge transition was something no one could have predicted. The fight with Muzan ended in chapter 203, ‘The End of the Thread,’ and everyone returned to their new and normal lives. Chapter 204 and 205 is when fans get to know the descendants of the characters in Demon Slayer.

Some are believed to have reincarnated and are enjoying a peaceful life in the modern world, such as Artist Yuushirou, who is the last survivor of his kind. He never died and started to spread knowledge through art.  Whereas others are believed to have their descendants. Tanjiro and Kanao’s descendent (Sumihiko and Kanata Kamado), Nezuko and Zenitsu’s descendants (Touka, Yoshiteru, and two little sisters), Inosuke’s and Aoi’s great-grandchild (Hashibira Aoba), Giyuu’s descendant (Tomioka Giichi), and Uzui Tengen’s descendant (Tenma) are the all the ones shown to us in the ending of Demon Slayer manga.

As Tanjiro held his head high and remembered his comrades’ words, Koyoharu Gotōge also left a thank you note for fans.