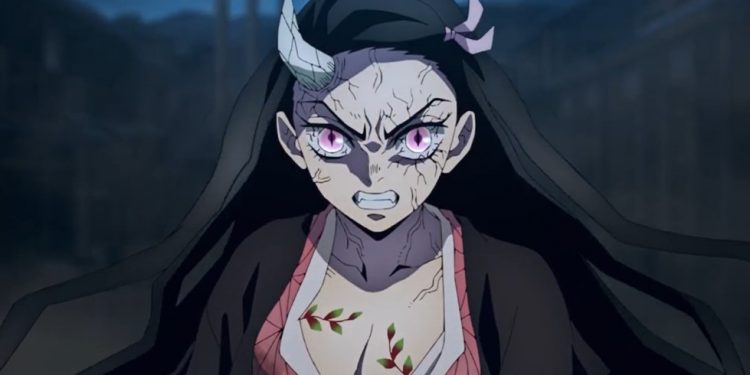 Daki almost kills Tanjiro, who uses Recover Breath to dodge the fatal blow. Tanjiro is glad that he can trade with Upper-Rank Demon. Daki gets angry that she is failing to kill Tanjiro and summon all her demon tapes to beat Tanjiro at her best. Tanjiro notices that the demon tapes have entered Daki’s body. He thinks that Daki will unleash her clone. Daki gained new powers, and her hair turned white. But Tanjiro attacks her and misses the target. She appears on a rooftop and realizes that the Hashira has arrived in Entertainment District. Daki is glad to kill the Hashira and please her master, Muzan.

Tanjiro realizes that Daki has transformed and gained tremendous power.  He realizes that he has to keep up with Daki until Tengen, Inosuke, and the others arrive. The old geezer, who couldn’t sleep, get out and scold Tanjiro and wonders why he is holding a sword. The geezer wonders if there is a sword model contest since a young boy wielding a sword. He asks them how dare they fight in front of his house and teaches them a lesson. Tanjiro knows that the old geezer is playing with fire since Daki might kill him.

Daki gets angry since the old geezer continues to scold them. She wonders if he knows who he is talking to. Tanjiro noticed that Daki targets the old geezer and was the OG to stay back. But he protects the OG who got his ram by Daki. Daki’s single strike that Tanjiro deflects also cut a row of buildings in half, and those buildings collapse. The citizens who survived shed tears for their families who died after the building collapsed. Tanjiro told the citizens to relax, and he will protect all of them.

Daki realizes that she has something to take care of since she knows that a worthy opponent is Hashira and can’t play around with brat. She decided to leave, and Tanjiro felt that he had to make her pay for the damage she had done. Daki asks Tenjiro if he wants to tell her something since she is in a hurry. She told him that he was ugly and had no time for ugly people since they deserved to die. Tanjiro gets furious, and the blood covers his eyelid. He recalls when Hshira wrote a letter for Demon Slayer Corps and trained him.

Tenjiro reveals his father’s faint mark on his forehead. He stopped Daki when she was about to leave. Daki was surprised since her new form’s speed was on another level. Tanjiro cut her left leg, but she shakes it, and it emerges instantly. Daki realizes that she has heard the words that Tanjiro told her. She wonders if she has fought with Tanjiro’s father in the past. Tengen and Inosuke argue at the dungeon, and they head to help Tanjiro.

Demon Slayer: Kimetsu no-Yaiba-Entertainment District Arc Episode 7 will be released on 16 January 2022. Tanjiro believes that Daki was once a human, and Daki reveals why she chose to be a demon since they don’t die or get old. She uses Demon Art Eight-Layered Obi Slash against Tanjiro. Tanjiro slashes everything, but he loses his breath when he wants to cut Daki’s neck. Let’s look at Episode 7 official details.

You can watch Demon Slayer: Kimetsu no-Yaiba Season 2 Episode 14 online on Crunchyroll & Funimation on Sunday at 11:15 PM JST. You can watch Demon Slayer: Kimetsu no-Yaiba-Entertainment-District Arc Episode 7 online on Bilibili Tv & Netflix in other countries. Tanjiro falls unconscious, and Daki almost kills him, but Nezuko protects him and leaves him lying on the rooftop.

Nezuko joins the fight, and they dominate Daki. Daki learns that Nezuko is the Upper-Rank Caliber. Nezuko lost that thing that stayed in her mouth, and she turned into a horned demon that puts Daki down with a single blow. Nezuko wants to make her pay. Let’s meet when Episode 14 is released.