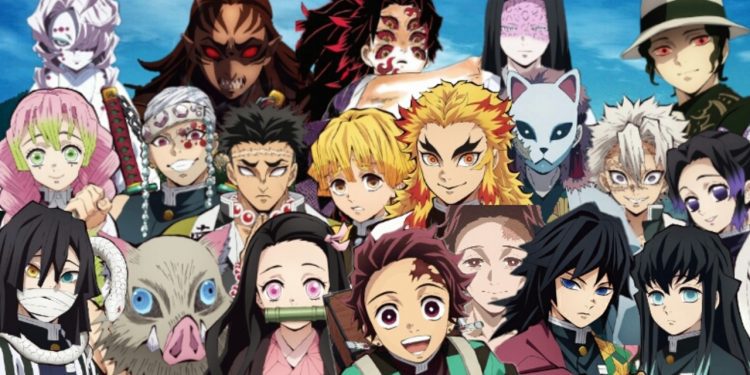 Running over the internet to find the birthdays of your favorite demon slayer characters? Don’t worry, we got everything you need in one place. Mark your calendars with the birthdays of your favorite characters as it is the time to celebrate the existence of our favorite fictional characters. Demon slayer is another chartbuster anime of the year. However, the manga was released back in 2016, but its fandom is still increasing. The Japanese manga series is also known as Kimetsu no Yaiba was drafted and illustrated by Koyoharu Gotouge. The manga was released on 15th February 2016 and was ended on 18th May 2020. Demon Slayer manga was also adapted into an anime series that was released on 6th April 2019 and is still going on.

The manga and anime, go around the adventure of a young boy named Tanjiro Kamado who has a sole aim in life to become a Demon Slayer. He made this his life motive after his family was slaughtered and his younger sister Nezuko turned into a demon. The plot of the anime is set up in Taisho-era Japan, which will show some pure traditions of Japan. So, without wasting any more time, let’s jump to the list of “Demon Slayer major characters birthday and Zodiac Signs”.

ALSO READ: How Many Chapters Are There in Demon Slayer Manga? A Quick Guide Through The Arcs

Tanjiro Kamado is the protagonist of the series Kimetsu no Yaiba. He is a demon slayer in the Demon Slayer corps. He joined the corporation to find the remedy to turn her sister back to a human, along with it, killing the demons and protecting the people from suffering. Before he became a demon slayer, his entire family was killed by the demon king Muzan Kibutsuji while her sister was turned into a demon. Tanjiro is an average heightened young muscular man. He has slightly tanned skin and has an athletic physique. The distinguishing feature is his hair, he has black hair with burgundy ends. Like a typical protagonist, Tanjiro is a literal sweetheart. He is very kind, gentle, and caring towards his remaining family – his sister.

At the beginning of the anime, Tanjiro has nothing special in him just an analytic brain to analyze the situation and fight according to it. Later, he became a prodigy for having great fighting skills. From his very childhood, he had this superhuman trait. He has a very strong sense of smell and can judge the situation based on the smell of the surroundings.

Nezuko Kamado, the second main character of the series. Nezuko is the younger sister of Tanjiro, a survivor of a demon attack by the demon king. She survived the night when her whole family was slaughtered by a demon and she was converted into a demon. When she is sober, she looks very cute, beautiful, but when she unleashes her demon she is the most fierce and dangerous. Nezuko is a petite young girl with fair skin and long black hair which is pink at the ends. After turning into a demon, she lost a large portion of her memory. However, she didn’t forget about her brother and her feeling towards him. Unlike other demons, Nezuko is protective of humans as her instincts run only to protect her brother.

After becoming a demon the most noticeable ability of Nezuko is the growth rate and how fast she regenerates without even consuming any human. This is a result of the high amount of blood she received from Muzan Kibutsuji. Although she is not a member of Twelve Kizuki, she is considered one of the strongest demons.

Zenitsu Agatsuma is a demon slayer and one of the major characters of the Demon slayer series. Zenitsu along with Inosuke Hashibira are the traveling companions of Tanjiro and Nezuko, who are going around several places in search of remedies to turn Nezuko back into a human. He is a young man with fair skin, average height, and eyes that reflect a scared look. Zenitsu has fairly long yellow-colored hair that reaches his ear. He comes off as a coward and often claims that he won’t live long due to his dangerous job. Although being a demon slayer who fights with demons regularly, he has very low self-esteem and considers himself useless when facing a demon. However, he is very caring and gentle towards others.

Zenitsu clearly denies his skills and undermines his talents as a demon slayer. The time his true power comes out is when he is asleep. At that time, the nerves that stop him to unleash his powers are at rest and let his underlying powers stream out. He has a better performance when he is sleeping, he sleeps in between a fight and accesses his full strength.

Inosuke Hashibira is also referred to as one of the major characters of the series Demon Slayer. He is also a traveling companion of Tanjiro and Nezuko. He is also a fellow demon slayer of Tanjiro at the Demon Slayer Corps. Inosuke is a very muscular young man with an extremely toned body.  He generally wears a wild pig face mask, but without this mask, he has quite a handsome face with long eyelashes, dark green irises, and a small mouth. He also has dark hair that fades as blue at the ends. Inosuke is one of those people who have this weird interest in challenging everyone all the time. He likes to show off his skills and is extremely short tempted and arrogant. This nature of his generally leads him into dangerous situations.

His major ability is that he is an extremely skilled swordsman, he was able to learn the Total Concentration Breathing technique on his own. He even managed to develop his own breathing style which is known as beast breathing. Although he is very skilled at slaying demons, he is more cable than this. He single-handedly killed the Horned Demon which was posing a great threat to many other demon slayers.

Kanao Tsuyuri is a major supporting character of the series Demon Slayer. She is also a fellow demon slayer of Tanjiro at Demon Slayer Corps. Kanao is the adopted sister of Kanae Kocho. She is a very beautiful young girl with large gentle eyes, which are light purple in color. Kanao also possesses black hair which she generally ties as a side pony and decorates with a butterfly hairpin. Due to her unfortunate past, she has developed a very quiet personality. She developed this indecisive nature and is generally unable to make any decisions. As a solution to this, her sister Kanae gave her a coin and ask her to flip this and choose what to do. After Kanao joined the Demon Slayer Corps, she regained her natural self and started showing emotions.

As for her abilities and powers, she is Tsuguko of Kanae, and Shinobu and has been personally trained by them both. Other than this, she possesses extremely sharp eyesight that helps her to predict the opponent’s next move. When the ability is further enhanced, it is known as the Flower Breathing, Final Form: Equinoctia Vermilion Eye.

Another major supporting character on the list is Genya Shinazugawa. He is also a demon slayer at Demon Slayer Corps. He is the younger brother of Wind Hashira and Sanemi Shinazugawa. The time when he appeared for the first time in the series, he was a short young man with slanting eyes. Due to having slanting eyebrows, he has this permanent angry expression on his face. He also has messy black hair. Genya was termed as the ‘lone wolf’ due to his personality of being alone and refusing any kind of help from anyone. Initially, he was very hot-headed and foul-mouthed. His personality and attitude highly resemble his older brother Sanemi.

Genya has somewhat different kinds of abilities from other demon slayers. After consuming the flesh of a demon he gained a temporary power to transform into a demon. Depending on the power of the demon he consumed, he can regenerate and can multiply his physical strength.

Queen Reveals Germa Science In Chapter 1035 of One Piece