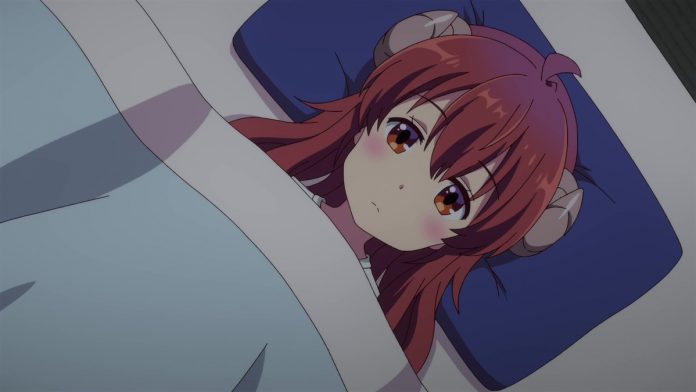 The series Demon Girl Next Door revolves around a schoolgirl, Yuko Yoshida, who, after experiencing a strange dream in which a demon-like girl tries to communicate with her, grows horns and a tail overnight. Yuko discovers that her family is descended from the Dark Tribe, demons who have been at war with the Light Tribe and its magical female warriors for centuries. Demon Girl Next Door Season 2 Episode 6 shall be coming up as well next week – so read on to find out everything about the details.

Long ago, the Light Tribe sealed the Dark Tribe’s abilities, but the seal is starting to come undone, and Yuko must gather the blood of a magical girl as an offering at the demand of her cola-loving ancestor who resides in the family’s demon god statue. Yuko meets a magical girl right away in classmate Momo Chiyoda, as luck would have it. As Yuko continues to push Momo in an attempt to overcome her and suck her blood, this story of unexpected competition and friendship begins. Demon Girl Next Door Season 2 Episode 6 will be continuing with the journey of Momo and Yuko.

The Demon Girl Next Door is a lighthearted slice-of-life comedy based on Izumo Ito’s manga of the same name, which was serialized in Manga Time Kirara Carat. To store everything, six Tankbon volumes were used. In the middle of July and September of this year, an anime series adaptation was aired on television by J.C. Staff. In April 2022, the second season premiered. Demon Girl Next Door is very unlikely at its finishing era. For starters, the show’s entire premise remains largely unresolved. Yuko must still overcome Momo in a fight to the death in order to free herself and her family from the demon curse. However, the fact that Sakura has appeared and intimated that there may be a method for Yuko to track down her long-lost father is sure to throw things off. So keep watching to find out!

The Episode begins with Momo making a spirit vessel in the mornings with a voiceover playing in the background describing the art of vessel making. Lico is seen visiting Yuko along with Shirosawa, who came to apologize to her, and later on, they discuss Sakura and her whereabouts. Lico recalls the time she first encountered Sakura to the others.

Shirosawa asks Yuko to join again and start working at the cafe to gather more information which Momo opposes because she doesn’t want Yuko to not get into any more funny business just to have some information about Sakura.

Shirosawa explains that possibly can’t be the case, and the mascot was designed after a magical spirit of the cat that he saw once. Ryoko exclaims that it probably was Sakura’s core because normal cats don’t pass through walls and leave behind petal trails. The group confirms the date, which aligns with the last time Mr. Tapir saw Sakura, so all of them decide to search for a cat with a red and white-collar in the designated area.

Demon Girl Next Door Season 2 Episode 6 will release on May 13, 2022. The Episode is titled “Vow Under the Setting Sun! The Path Forward for Demonkind!”

If you want to keep up with the latest releases of the show, make sure to watch it on the official website of HIDIVE, and while you’re waiting for the new release to drop, you can binge-watch season one and the first five episodes of Demon Girl Next Door Season 2. The anime will be broadcast on Animax Asia and Bilibili TV in Asia, with subtitles in English, Thai, Vietnamese, and Indonesian.

Also Read: The Demon Girl Next Door and Dawn of the Witch Episode Delayed: What Happened?