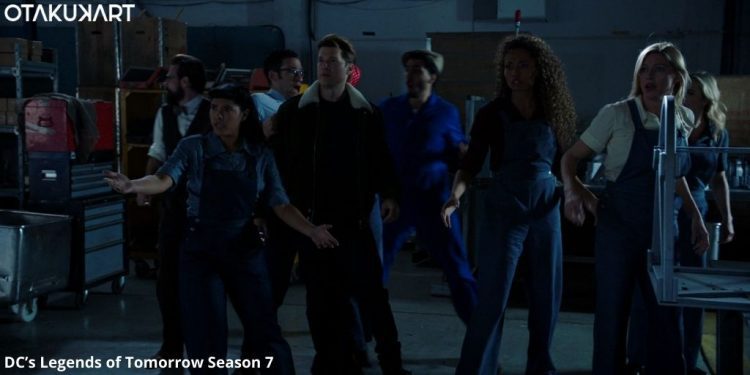 Things are about to get out of hand for our heroes on DC’s Legends of Tomorrow Season 7 Episode 9. Meanwhile, the previous episode didn’t make it any easier for them either. The episode gave us a look at the android Legends who were the exact replicas of the original Legends but with slightly different personalities. In addition to that, they had the wrong idea that they were the real Legends and the original ones the androids.

On the other hand, the real legends were on the run from the androids who were trying to hunt them down. Meanwhile, androids Astra and Zari died on the mission while trying to catch the real legends. Although, things got exciting when android Sara started to have suspicions about android Dr. Sharpe when she healed Zari and Astra in no time who clearly looked dead after getting shot on the mission. But the question was, did Sara figure out the truth?

The American superhero team-up television series has been quite popular since it first arrived on 21st January 2016. Furthermore, the show is a spin-off to the popular series “Arrow” that started the Arrowverse. The well-known filmmaker Greg Berlanti has developed the show along with Marc Guggenheim, Andrew Kreisberg, and Phil Klemmer. As the show moves ahead in its seventh season, the fans are eagerly waiting to watch DC’s Legends of Tomorrow Season 7 Episode 9. But first, let us dive into the events of the previous episode and find out what happened.

Episode 8 of DC’s Legends of Tomorrow Season 7 dropped on 12th January 2022 and was titled “Paranoid Android”. The episode began with the Legends having a party in 1943 Seattle. Meanwhile, the android Legends arrived there to hunt them down as they were programmed to believe that they were stopping the android Legends from causing anachronisms in the timeline. However, they failed to kill the real legends as they escaped in Davies’ time ship. Whereas, androids Zari and Astra got shot and killed by Bishop who used a machine gun until android Sara killed him.

Later at the ship, Dr. Sharpe fixed up Zari and Astra just like new that got Sara suspicious since everyone clearly saw that they were dead. While trying to subtly find out what she did, Sara got a look at a chip with Zari’s name on it. But Sharpe told her that it stored all of Zari’s medical records. During the mission, androids Behrad, and Spooner killed a convoy of the Soviet army using a radiation gun that Sharpe told was a destiny restoration gun. Moreover, killing and threatening people was not looking so much as what heroes would do. This got android Sara to get even more suspicious. Luckily, while getting treatment from Sharpe for her shoulder wound, she acted as being unconscious and saw Sharpe replace a metal joint in her shoulder.

Additionally, she got her hands on the CPUs of all her android teammates and showed them to Zari. However, they both acted as everything was normal until Zari hacked into the CPUs to figure out what was the truth. Meanwhile, Sara played her part on her solo mission that was to kill a Soviet scientist Dr. Irina Petrov. But she didn’t kill her after Zari told her that they all were the real android legends, not the ones they were hunting. Although, Sarah’s plan to shut down Gideon from manipulating them didn’t work when Zari made a deal with Gideon. Eventually, in the end, Sharpe reprogrammed Sarah’s brain now making her a brutal assassin who ended up killing Dr. Irina.

“DC’s Legends of Tomorrow Season 7 Episode 9 will release on 19th January 2022 at 8 pm ET on The CW.” Moreover, the episode will be titled “Lowest Common Demoninator”. The episode will see the real Legends arriving in the Manor Dimension after making the time jump. However, things will get more hilarious when they find themselves stuck in a reality show.

“DC’s Legends of Tomorrow Season 7 airs every Wednesday at 8 pm ET on The CW in the United States.” Other than that, the show is available to stream on Amazon Prime Video and Youtube TV. Moreover, the show airs every Wednesday on CTV at 8 pm ET in Canada. Meanwhile, the new episodes are available every Thursday on Binge at 5 pm AEDT in Australia. Furthermore, Australian viewers can watch the show on Foxtel as well.