The fans and the viewers are getting very much excited for DC’s Legends of Tomorrow Season 7 Episode 4. This is not a surprise since the ongoing season has started with another fascinating storyline. Furthermore, the previous episode gave the viewers a lot to cherish. It even took them back to the initial episodes of the series that quite a lot of people miss already. The show has been very successful in the past few years. However, that was not the case when the show first premiered on 21st January 2016.

Although it started to impress the critics and fans as the story of the show progressed ahead. It was inspired by the characters of DC comics and the teams in the comics. In addition to that, the show was also a spin-off in the Arrowverse and included the characters from the shows like “Arrow” and “The Flash”. However, as the series progressed, we saw new characters introduced in the show that have never been a part of the original shows in the Arrowverse. The term Arrowverse is denoted for all the DC tv shows that have originated from the original show “Arrow” and are interconnected to each other.

Moreover, we have also seen several characters from different DC tv shows in the Arrowverse crossing over to the show. In addition to that, many original characters have now left the show but new ones have joined as well. Although, even with all these changes the show has managed to gain a lot of popularity around the world. We are now in the seventh season and the fans cannot wait for the release of DC’s Legends of Tomorrow Season 7 Episode 4. However, let us first take a recap of the previous episode and find out what happened. 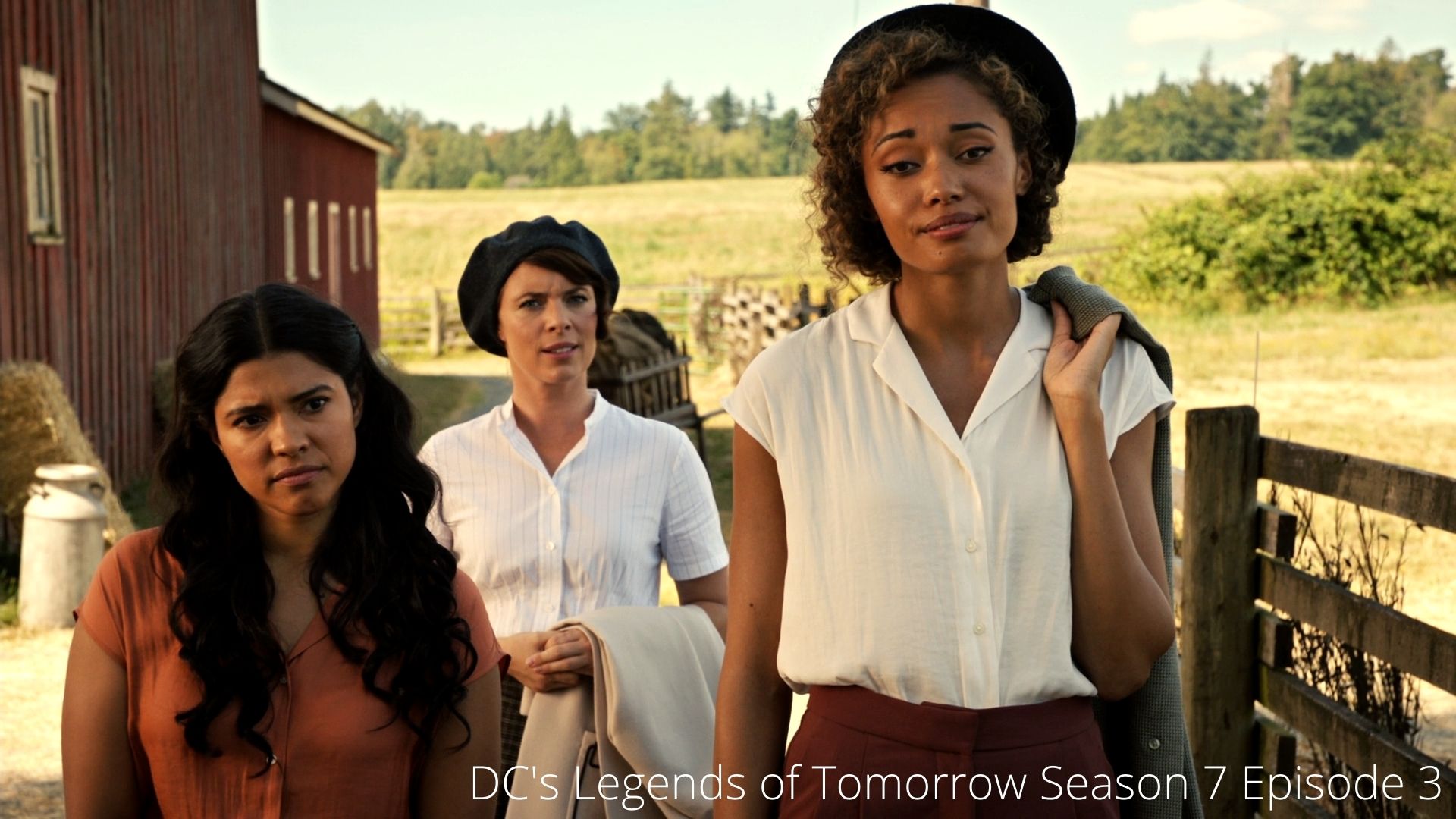 Episode 3 of DC’s Legends of Tomorrow Season 7 came out on 27th October 2021. In addition to that, the episode was titled “wvrdr_error_100<oest-of-th3-gs.gid30n> not found” and was the 100th episode of the series. Yes, that is quite a different and weird title for an episode. However, the episode in itself was an amazing one and gave the fans a memorable nostalgia. The episode began with Human Gideon, Spooner, and Astra trying to find the highway to reach the Legends. However, they arrive near a house where Astra smells a pie and asks Gideon to steal it.

But Gideon refuses to since it will change the timeline. But Astra asks her to do so because if they are hungry they won’t be able to move forward. On the other hand, Spooner tells Gideon to do whatever she wants. All of these choices and not being able to decide the correct option break her down and she falls unconscious. Astra and Spooner take her inside a farmhouse and Astra asks Spooner to find out what is wrong with Gideon. However, Spooner fails to find anything. But then Astra uses her magic to take her and Spooner inside Gideon’s mind and bring her back.

The mind of Gideon looks exactly like the time ship and there they see Jax who tells them that Gideon’s short-term memory has been wiped out completely. However, he is the only one that was deep inside her subconscious which is why he is there to help them save her. Here things start to get all crazy and similar to that of the famous Christopher Nolan film “Inception”. Although Atra and Spooner are in Gideon’s mind, they once again go deep inside her memory particularly at the point of one of her memories that she has forgotten.

How Did Gideon Get Back Her Memories?

While Astra and Spooner are in the memory, Gideon also arrives there but she does not remember it. But soon she starts to experience the memory and recalls it the way she experienced it first. Then the three of them return back to her original mind where Jax is present. Astra thinks that now they can go back but Jax tells her that it is not that easy. He tells her that they will have to help Gideon go to different memories like the previous one to help her gain all of her memory.

The second memory they visit is of the initial days of the Legends when they did not like each other. There they see Sarah, Captain Cold, Hawkman, and Ray Palmer. Gideon soon remembers that moment and gets ready to go to the next memory. Now she visits the memory that had Professor Grey all happy from hearing the news of becoming a grandfather. However, soon things get bad as Gideon feels dizzy. She learns that there is a virus that has been erasing all her memories with the Legends. The next moment everything shuts down in the ship and they are trapped in the main area.

The virus also appears in front of them who is none other than the evil or bad part of Gideon. She tells Gideon that her humanity has compromised their original motive and that is why she is erasing all of them to restore her. But human Gideon decides to take control of the ship manually and take them back to her positive memories. She successfully reaches her destination memory and they make it out safely. However, now they all have another mission ahead of them, stop the virus from destroying Gideon’s memories using one of those memories.

The Return of The Old Legends!

Jax gives Spooner a gun that is capable of destroying the virus however he warns them to look for any difference in the behavior of any of those memories as they might be the virus itself. Soon they reached in another memory where Hawkman, Sarah, Ray Palmer, Captain Cold, Mick, and Rip Hunter were present. Spooner was getting suspicious of the behavior of Hawkman and Captain Cold as they started fighting. However, Gideon told them that it was their normal behavior. But soon Rip called Gideon with her and took her to the lab.

Although it was the Evil Gideon in Rip’s form and she trapped Gideon in the lab. Meanwhile, Spooner and Astra asked Jax to call them back as the Old Legends have now turned on them. They were deciding to take the Legends down but soon evil versions of Zari and Behrad attacked Spooner and Astra. However, Jax shot them both with the gun and they regained their consciousness and told Astra and Spooner to go find the good Gideon. On the way, Astra and Spooner fought other evil legends. They fought Nate, Zari, Sarah, and Ava.

On the other hand, evil Gideon was trying to manipulate human Gideon to accept her by making her experience the pain she had felt with all the Legends in the past. She even showed her that her humanity was part of a protocol that Rip put in her system. After experiencing all of this, she was about to accept evil Gideon with no humanity but soon Astra and Spooner arrived in the lab. They all then went to a lot of the good memories where everyone on the ship celebrated together and cherished the moments. In those memories, we saw more of the other Legends. This made Gideon realize that she has gone through a lot to become human to give it all away just like that. So she decided to fight evil Gideon by herself and take control of herself.

What Happened At The End of Legends of Tomorrow Season 7 Episode 3?

Human Gideon finally confronted evil Gideon and was all ready to destroy her up. But then she realized that the other Gideon was not her enemy but a part of her. It was the one who has kept her focus on protecting the timeline while her humanity is her own achievement. So she decided not to destroy the other Gideon but to take control of both of them. Finally, we saw all of the Legends from the first episode till now together accepting Gideon as a Legend.

Finally, Gideon, Astra, and Spooner came back to their original consciousness at the farm. Now they stood up once again to get on the road to find the Legends and save them. However, the episode did not finish here. We saw several scenes from the year 2213 where another enemy of the Legends was gearing up to destroy them. He started getting his memories back from when the Legends captured him. He also found out the box in which he copied the software of Gideon and then erased her memories of the Legends. At the end of the episode, he was now ready to find the Legends and kill them.

The 100th episode of the series gave the fans a lot to enjoy and love. That is why they are now excited for “DC’s Legends of Tomorrow Season 7 Episode 4 that will be released on 3rd November 2021 at 8 pm ET on The CW“. In addition to that, the episode will be titled “Speakeasy Does It”. The next episode will once again focus on 1925 Texas where the Legends are stuck. Furthermore, we will once again see The Bullet Blondes and they will put on a show. Meanwhile, Gideon, Astra, and Spooner will try to get to the Legends in order to help them. Therefore stay tuned for the episode next Wednesday.

The latest season of the superhero action fiction series has been created quite a stir on the internet. That is why the viewers are searching about where to watch DC’s Legends of Tomorrow Season 7? The answer to that question is quite simple. “DC’s Legends of Tomorrow Season 7 airs every Wednesday at 8 pm ET on The CW.” Furthermore, the show is available to watch on the official website of The CW as well. In addition to that, the viewers can head to Youtube TV and Amazon Prime Video to stream the show. So go ahead and watch the show if you haven’t already.

Where is Hot Fuzz Filmed? Production Locations For The Police Action Comedy Movie

Did JoJo and Kylie Break Up? The DWTS Partners Split

Did JoJo and Kylie Break Up? The DWTS Partners Split

Bernhard Langer Net Worth: How Much Does The Golf Star Earn?

How rich is the professional golfer Bernhard Langer is what all his fans want to know. Here in this article,...