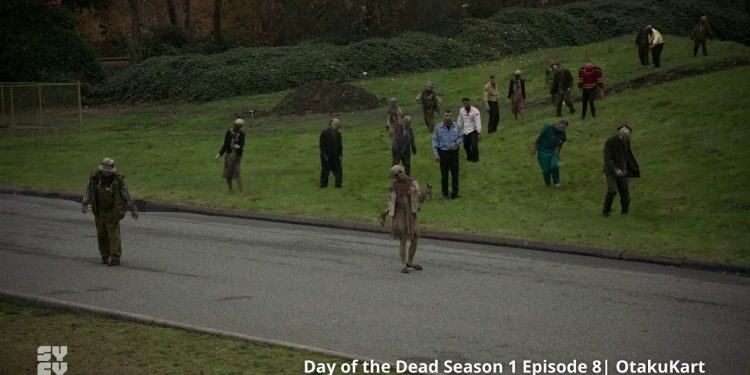 From Day Of The Dead Season 1 Episode 7

Day of the Dead Season 1 Episode 8 suggests we are about to see the Paymart where the survivors have taken shelter, becoming a warzone. Well, the recent episode was quite peaceful, to begin with. Quite a romantic one if we look at how things turned out for Jai and Amy. But, towards the end, some relationships failed. Apart from that, Paymart may have become a comfy shelter for the survivors. But even they knew that it’s just a matter of time, the dead start rolling in. So they were preparing themselves for the same.

So coming down to the same, Paula, the leader of the survivors, for now, lost her husband. Someone who gave his life for them to save them from the dead. This broke Luke to the core while Paula vented out in her own way. But towards the end, it’s all about moving on and looking at the bigger things. Paula decided to do the same when she realized Jai was looking forward to having a future with Amy. Despite whatever the future brings in this post-apocalyptic world. Here is a look at everything that went down recently in Day of the Dead Season 1 before we move to Episode 8.

Previously on Day of the Dead Season 1, we opened up with the survivors honoring the death of Trey. He gave his life saving them last night. The group paid respect to the dead before Paula decided to fire their body. Hoping Trey doesn’t come back as the dead. Something that didn’t fit with Luke, who didn’t like the idea. But Paula went with it. Cam later tried to comfort Luke as he has been through the same situation before. The conversation only escalated an argument between them.

Meanwhile, Paula cried her heart out as well. Lauren, on the other hand, is worried that she might be a bit. It’s only a matter of time she turns into one of those things. But before that, she finds someone else in the same room in need of help. It’s Herb who has cut on himself and is bleeding. He denied wanting Jai’s help, and Lauren decided to do it herself. But every moment she got closer to his blood, the more thirst she felt of it like the dead.

On the other side, Jai questioned Amy if their marriage was the right decision. The apocalypse could be a sign that it shouldn’t happen or something. Amy assured him it’s nothing like that, and she loves him dearly. Amidst all the apocalypse, Jai plans to marry her. If he dies tomorrow, he wants to die being her husband. Paula supports him and gets them married in front of everyone.

As happy Jai and Amy’s relationship is, Paula and her son Luke find each other at crossroads as Luke comes out as gay. Sarah wakes up and pays a visit to her grandmother. She questions her about a zombie mask she picked and learned about a folk legend. The episode closes with zombies crossing the perimeter.

Day of the Dead Season 1 Episode 8 is releasing on 3 December 2021. It is titled “To Anyone Who Can Hear My Voice.” The official synopsis of the episode suggests the fortress of Paymart becomes a warzone. Something Paula saw coming a long time ago. She was hoping to keep the walls, but it seems like the survivors may have to fight their way out in order to survive to see another day. How many of them will survive, and for whom will it be the last day? All in Day of the Dead Season 1 Episode 8.

Also Read: The Blacklist Season 9 Episode 6: When Will The Hiatus End?