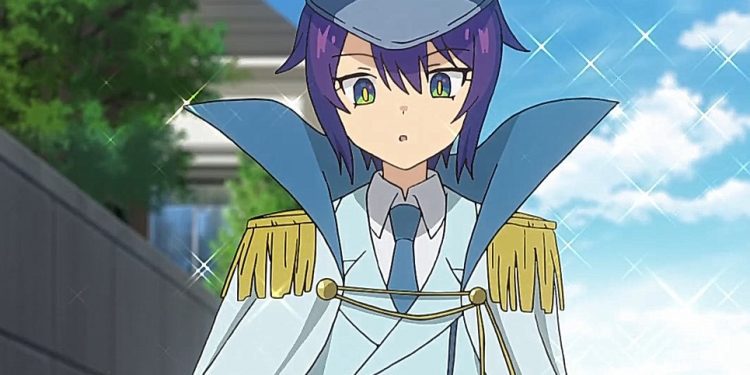 The Great Jahy Will Not Be Defeated Episode 19 reveals the Great Jahy rival that vows to defeat Jahy after gaining new powers. Saurva was walking alone in the streets, and she was worried about how she will defeat Jahy. But she heard a voice saying that she would eradicate the power of misfortune. After a huge light, Saurva receives tremendous powers, and she is surprised, but she says it doesn’t matter where they come from since she can defeat Jahy. In the latest episode of The Great Jahy Will Not Be Defeated, Saurva flies and begins to hunt for Jahy.

She spots Jahy on the ground and teleports in front of her. Saurva told Jahy that her era had come to an end. Jahy wonders who the hell is a lady wearing a uniform like a cop. Saurva can’t believe that Jahy has forgotten her rivalry and asks if she has forgotten her. Jahy wonders if they know each other. She forces her to remember, and Jahy wonders if Saurva is that distressed lady from the park that she cheered. Saurva realizes that the kid she met that day was Jahy, but she is surprised that now Jahy is tall.

Jahy asks her if she is okay after consoling her that day. Saurva gets angry that Jahy has forgotten her and that in Dark Realm, she has been in trouble because of Jahy and even in the human world. She got up and told Jahy her name and that he will beat Jahy and become the Dark Realm’s second-in-command. Jahy looks at Saurva’s eyes and asks her if she is crying. Saurva gets disappointed and replies that she is challenging Jahy not to cry. She uses her powers to summon a blade.

Previously on The Great Jahy Will Not Be Defeated Episode 18

Saurva reveals that she has received new powers, and she will beat Jahy and rule the Dark Realm. Jahy wonders what that light is coming from and whether it is a Dark Realm resident. Saurva reveals that she is Dark Realm Number Three, and she wields the power of light. Jahy wonders if Saurva has the Magical Girl’s same powers and asks her how she received that power. Saurva replies that she will tell her if she beats her. She uses her listening blade to cut Jahy, who screams.

Jahy opens her eyes and finds that nothing has happened to her body. Saurva thought she had defeated Jahy, but she was surprised not to see a single scratch on Jahy’s body. Jahy says that her shoulder is not stiff and wonders if Saurva massaged her instead of fighting with her. Saurva wonders if Jahy is teasing her and decides to attack again since she considers that as a warm-up. Jahy watches her, and nothing happens when she tries to cut her with that blade. It took her the whole day, and Jahy decided to go home.

Saurva asks her how she feels, and Jahy replies that she feels like someone is tickling her. Saurva wonders if that voice that told her about the powers was fooling her. Jahy reveals that she has gathered Mana Crystal in the Human Realm and restored her powers. Saurva gets scared and decides to run away. Jahy realizes that she forgot to ask about the source of that power. But when Saurva ran away, her outfit changed, and that light vanished. Saurva arrives near the river and reveals that she will beat Jahy with her powers someday.

The Great Jahy Will Not Be Defeated Episode19 Release Date

Also Read: The Shrine Maiden Ritual In Episode 10 of Shikizakura.