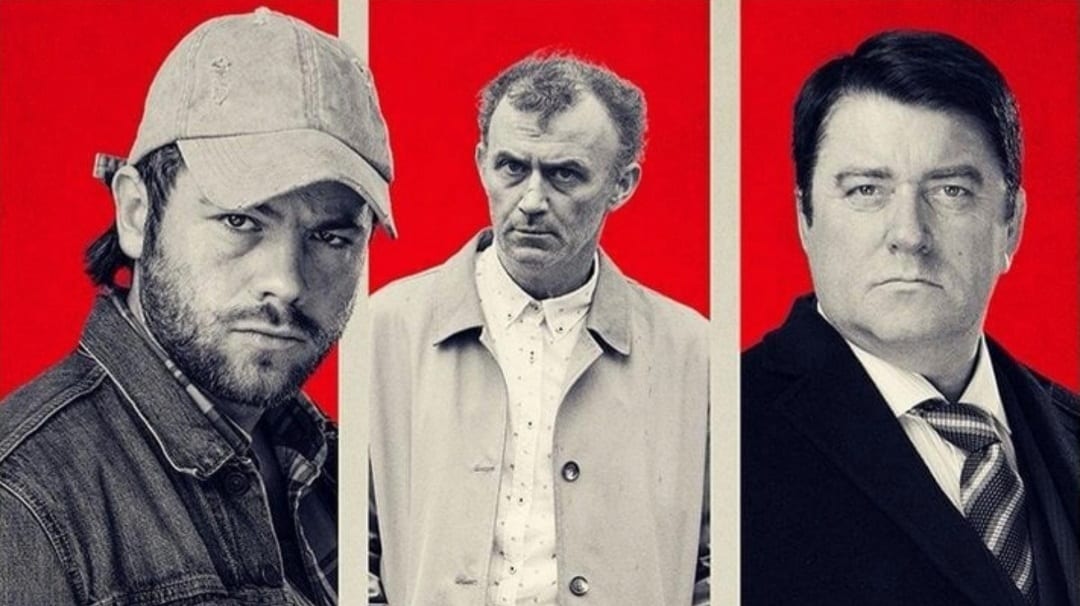 Dark Lies the Island is a 2021 Irish dark comedy movie. Ian Fitzgibbon is the director, and Kevin Barry has penned the screenplay. The film follows a doomed love rectangle in a bleak small Irish village. It is based upon Kevin Barry’s own novel of the same name. Michael Garland is the producer of the film. Cathal Watters handles the cinematography while Stephen O’Connell takes the helm of editing. Jeffery Sheriff is responsible for the production design, while Stephen Rennicks composed the music for the film. The film stars Pat Shortt, Charlie Murphy, Peter Coonan, Moe Dunford, Tommy Tiernan, Aisling O’Sullivan, and Jana Moheidan. It has a runtime of 1 hour and 27 minutes. The cast includes Tommy Tiernan, who plays the character of Richie in the film. Then there’s Charlie Murphy, who plays the lead role of Sarah. She’s at the center of the film.

The film is an adaptation of Kevin Barry’s collection of short stories. He also co-wrote the screenplay. Barry’s a recognized writer of short stories with a panache for lyrical lines. Many of his lines in his short stories are quotable. Dark Lies the Island is his second compendium of short stories. His previous short story collection was titled “There Are Little Kingdoms” and won the Rooney Prize for Irish Literature. Dark Lies the Island was shortlisted for the Frank O’Connor International Short Story Award. The collection contains stories about love and cruelty, desperation, crimes, and hope. The stories are replete with riotous humor and immensely quotable lines. Barry is also a master of poetic and lyrical language that he uses in this short story compendium.

The film is based on the short story collection of the same name by Kevin Barry.

Who Plays Who in Dark Lies the Island? 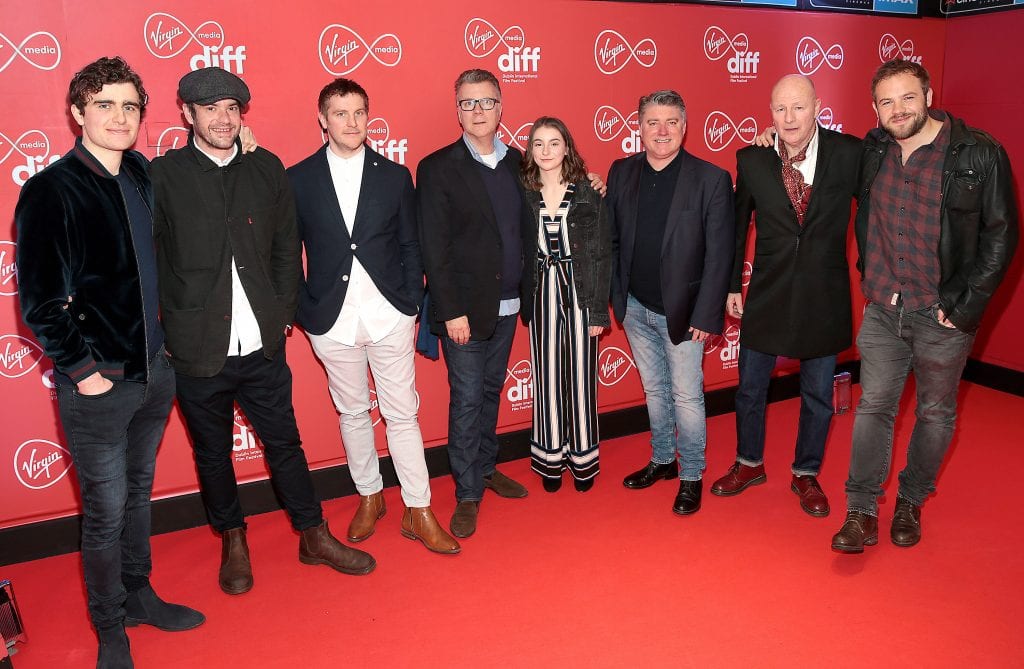 The cast of Dark Lies the Island.

Dark Lies the Island is a darkly comic movie. And the cinematography appropriately complements its sensibilities. The film starts with the shot of a lake with Sarah’s narration in the background. The atmosphere is all dark and bleak. It also gives off a Coen Brothers vibe in both its content and tone. The way it’s shot also helps accentuate the bleakness. Some jokes have this sort of bleakness that you find in Coen Brothers movies. But the movie is still very much its own thing. The village is filled with corrupt individuals and troublemakers. There’s a sense of despair and darkness in the village’s air, perfectly conveyed through the cinematography. There’s also a fair bit of jokes that capitalize on the bleakness and despair. The rural setting, with its moody landscapes and characters who are bitter and far from jolly, set the tone.

The central focus is on the Mannion family with all their trope-y or gamey characters. There’s the patriarch Daddy Mannion and the others who make up a troublesome bunch. The story revolves around these corrupt and slightly off characters that we all know in real life as well. Apart from good cinematography, the writing is also great, but it’s the performers who have to do it justice. And in my opinion, the cast does a great job at their performances, portraying these gamey characters with believability. And the kind of a film that this is, it’s very much reliant on the cast. Because it’s the performances that would bring out the bleakness and convey that sense most effectively, you can have a moody vibe, but you need good actors to play the part of these corrupt and dreadful characters. The cast does a good job at doing that.

Great Performances by the Cast

Pat Shortt plays the role of the patriarch of the Mannion family, Daddy Mannion. He is married to Sarah, the central character of the film. He is also a very pathetic and, at the same time, terrifying character. Daddy Mannion is a big shot, and his name sits above every other business in town. He is persuasive and bleak, and terrifying. Then there’s the character of Martin, a member of the Mannion family. He’s a bit of an oaf, always derailing things and causing new troubles. His usual incompetence and ineptitude are a big cause of irritation for the Mannion family. And then there’s Doggy Mannion, yet another member of the Mannion family. He’s the former lover of Sarah, who has now married his father. He lives shut inside his van and is a bit of a degenerate, always pulling strings and conspiring from his home.

All of these characters are made up for the intrigue of the film. They are all darkly goofy and comical. And eventually, all of these characters and their choices are going to intersect, and that also adds to the excitement. The actors have done a great job at portraying all these weird and bleak characters. Watching how all these characters lead to the eventual and inevitable intersection makes the story gripping. All three of these members of the Mannion family are corrupt and shady. And they are what makes the drama very worthwhile and add to the overall bleakness. Not only that, they all are weirdly comical, and if you can stomach the bleak comedy, you’d find them very enjoyable. But it’s Sarah’s character that is central yet very unclear. 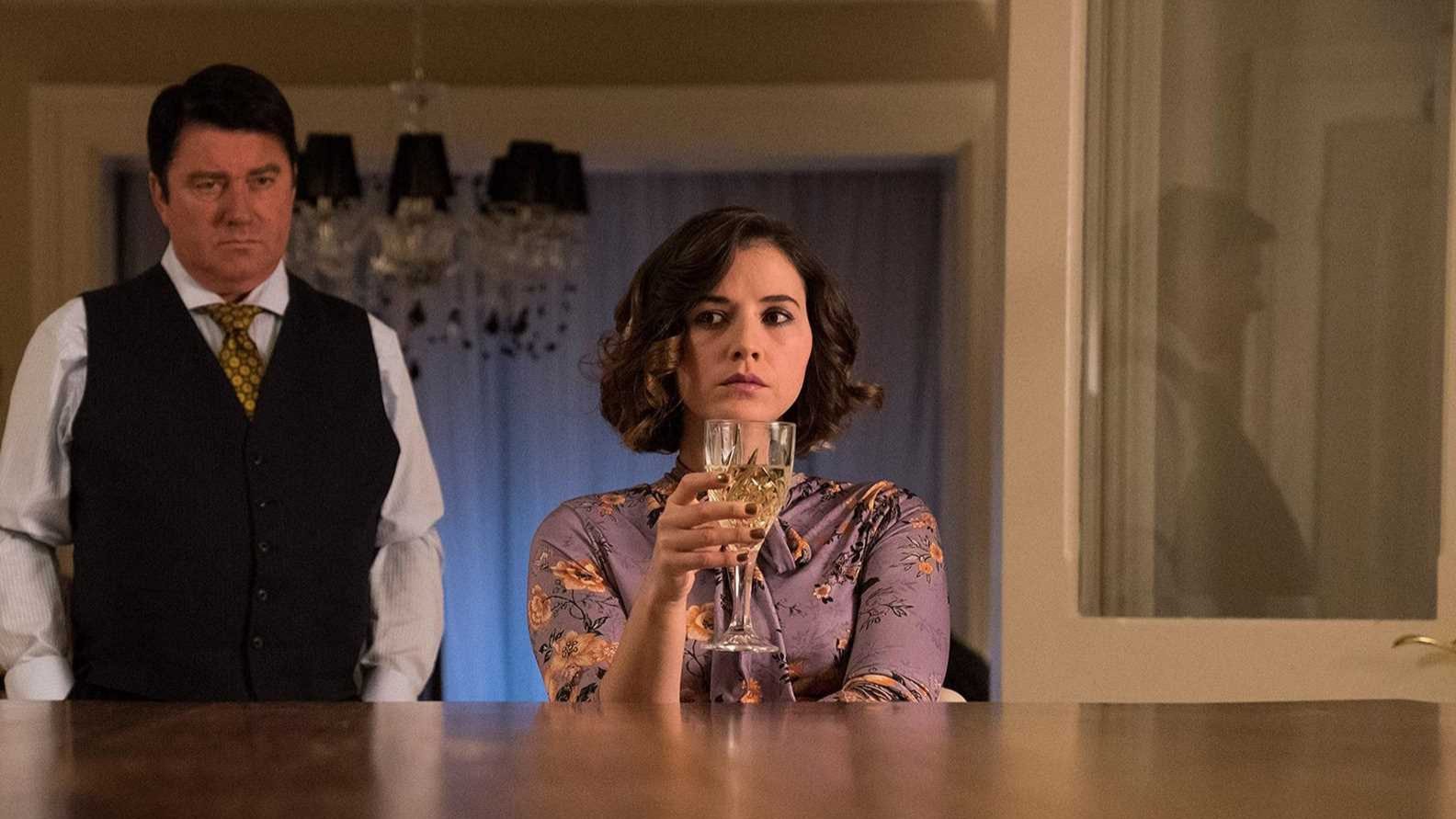 Things that Hold the Film Back

Sarah’s motivations are not clear in the film. She narrates the story, but her motivations are much like the village lake. There’s much more going inside the surface. But the inexplicable motivations also add to the general tone of the film. She hints at her regrets early on, talking about how she married Daddy Mannion. She’s most likely a character that regrets her decisions and is sad about life. She is frustrated at her daughter’s lack of social behavior and definitely at her choice to marry Mannion. But it’s not entirely clear as to what motivates her decisions in the film. One thing is clear; she’s not a happy woman. Her relationship with Daddy’s estranged son Doggy and then the fling with Martin makes a love rectangle. It forms the basis for the dysfunctionality of the Mannion family and the drama in the film.

There’s a lot of things that could have made the film much better than what it came out to be. There are interesting characters replete with the gamey characteristics of dysfunctionality. The cast also does a good job at playing these characters. And yet, the film doesn’t quite land. There’s a lot of directions the film begins to flail in. With many characters in the ensemble, the story fails to be cohesive. The atmosphere can only take you so far, and it can’t compensate for a cohesive storyline. Barry is a talented short-story writer, but his literary chops don’t quite translate to the film here. It’s a shame because the film has a heck of a premise and a talented cast. Patt does a great job at playing his corrupt and pathetic character. So does the young Jana Moheiden as Daddy and Sarah’s daughter.

The film is a dark drama about bleak and comical characters. At its core, it’s a story about a very dysfunctional family. The characters are the most interesting part of the movie. And the actors do a great job at portraying them. The great performances, coupled with a remarkable camera work by Cathal Watters, are the strongest suit. But the film ultimately flails and falters due to an incohesive storyline. With that said, there’s a lot of things to appreciate about this bleak Irish comedy. It’s certainly worth your watch. Our rating for Dark Lies the Island is a 3 out of 5.