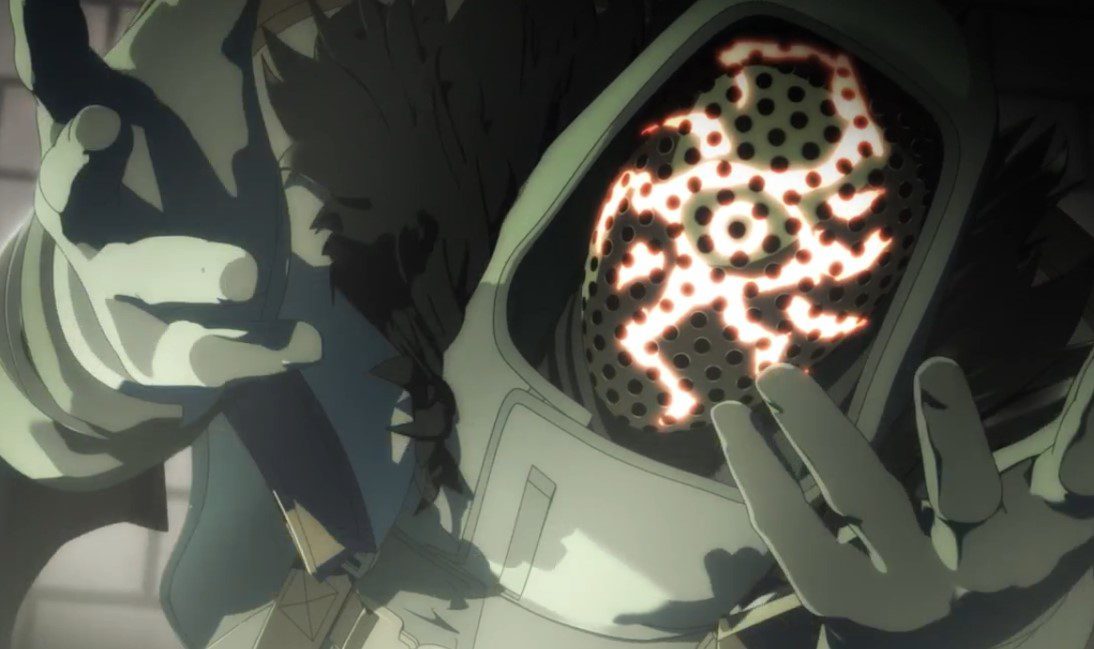 The Knocker-Up battle starts with D_Cide Traumerei the Animation Episode 9 with Ryuhei and his crew defeating the monsters from teleporting to the Earth. The episode will release this weekend. From the latest episode of  D_Cide Traumerei the Animation, Ryuhei and Rena met with Rando and Eru, who joined them to take on the enemies in another world. After defeating the enemies, they returned to their world and met with Tris. At the enemies’, HQ they talk about the Knocker-Up, wondering about their number. But that doesn’t matter to them since fate cannot get changed.

The mysterious hooded guy comments that Shibuya is the chosen land purified by Desaria. The guy adds that they must make them manifest. In Shibuya, the Knocker-Up crew is racing to get to their destination. Tris told Jessica to hurry up since the Traumerei is about to become a Desaria. Jessica spot the building and comments that it is right there. On top of that building, there is a portal the connects the Earth to the Otherside. Ryuhei is trying to catch up with the girls, but he is left behind.

He hits with a steel post since the two girls were calling out his name. The team enters the building and uses the lift to head up. Ryuhei follows with Rando and Eru after recovering. Ryuhei feels that the elevator is taking too long, and Rando told him that this is the fastest one. He hits the wall, and the lights inside the lift begin to deem. The power shuts down, and Ryuhei uses a torch to check if the lift is working. Ryuhei finds that there is no light on the numbers and realizes that they are stuck. Ryuhei presses a call button and asks if someone can hear them.

Ryuhei tried to do something alone, and Rando wanted to tell him something, but he thinks he can get them outside. Ryuhei gets tired of hitting the door and talked about the island. He teases Rando that where he comes from, there is no elevator. Rando replies that living on the island doen’;t mean they are stuck in prehistoric times. Rando adds that they have Wi-Fi and cellphones, and it is a usual place for them. The two tease each other about their home and the advanced technology.

Ryuhei notices that Rando ignores him since he brings those lame jokes from the 1950s and tells him to talk with him. Rando told Eru to sit down and asks her if she is okay. Eru replies that she is okay, and Ryuhei shouts at them since they are not listening to him. Rando replies that his guess is the Dreamer offered up their wish, and a Desaria appeared. Ryuhei agrees with what Rando told him. Rando adds that the Desaria probably swallowed up the electronics network and cell phone base relay station around this area.

Ryuhei realizes that his phone has no network and wonders why Rando treats Eru like a kid and overprotects her. Ryuhei asks Rando if his island is that great, and Rando replies that he is not sure how Ryuhei feels, but he loves his island. They continue to talk about the island. Ryeuhei thinks that everyone from the countryside always says the same things when they come to Tokyo. Eru reveals about the chieftain’s daughter that lived closer to a hundred. The rest of the crew battles with powerful monsters. Later, the electricity activates, and the elevator begins to move. Jessica and the great defeated the Wierd that slit into two.

Where To Watch D_Cide Traumerei The Animation Episode 9

Where Is Her Pen Pal Filmed? All About New Hallmark Film Locations