This Netflix movie garnered massive attention from the viewers for its ambiguous ending. 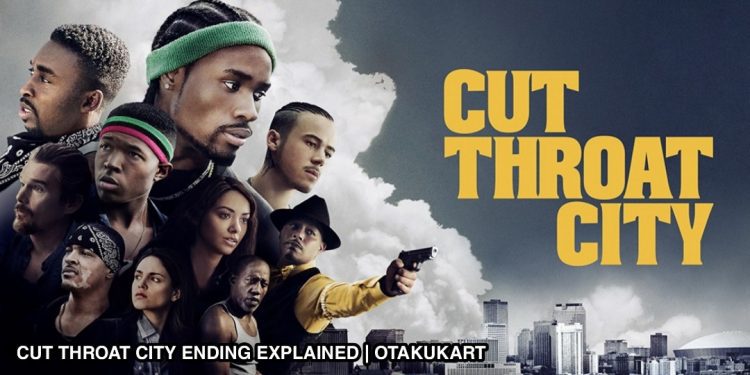 Cut Throat City is one of the popular Netflix movies. It focuses on the life of four different people as they deal with the catastrophic effects of Hurricane Katrina. This RZA directorial film became pretty successful with its storyline and concept. Moreover, the ending of Cut Throat City attracted more attention. The story talks about four young men who were devastated to have their houses destroyed. So to earn and meet the needs of all their financial problems, they chose to work with a gangster to loot a casino. But things didn’t work out the way they wanted to. Their intentions meant no harm, but it was a crime indeed and this landed the whole group in trouble.

The ending of Cut Throat City caused a lot of doubts in the minds of the people. Certain speculations were left unexplained in the story. The movie garnered massive attention from its fans, and in this way, the movie also made its way on Netflix as well. When it comes to earning money through unfair means, the use of FEMA Checks comes into the picture. This film introduces us to the lifestyle of young men who are miserably stuck with the unnecessary norms of society. Moreover, they’re completely engrossed in the negative aspects of racism and poverty.

The movie starts with the catastrophic hurricane and its side effects. Set in 2005, the story moves on with the introduction of four friends. Blink, Andre, Miracle, and Junior. And all of them belong to the Lower Ninth Ward. The hurricane led them to the path of poverty. They tried their best to attain certain possibilities, but in the end, they met up with Demyra’s relative, Lorenzo Bass. With him, they came up to the conclusion that they all needed to focus on working with him. They are pretty sure about the consequences, but their main aim is to earn their daily bread and butter at any cost.

Well, Lorenzo knew that he could make them work for him, and robbing a casino was never a big deal. And the fact that this was their sole chance to prove themselves. But things didn’t work out the way they wanted them to. Moreover, two police officers started hunting them down. And immediately, their life was in danger. Things took a different turn when all of them were blamed for stealing the heist money. After learning this, Lorenzo is furious, and now he’s setting up his plans to kill Blink. But, somehow, the trio helps each other and escape from his place successfully.

Since their lives are in danger, the trio is looking for more opportunities to escape from this hell hole that they’ve put themselves into. But soon, they discover that Lorenzo framed them up with the casino robbery. Instead of fulfilling their dreams, the trio began criminal activities under another gangster, The Saint. Amidst these problems, they carefully come across Detective Lucinda Benoit, and she tries to convince Blink to choose his career over crime. Towards the end, the young men are killed while they try to rob a FEMA office. But Blink supposedly received a second chance to release his graphic novel.

This movie has successfully covered multiple topics and this, in turn, disappointed many fans because the ending of Cut Throat City was completely disorganized. There were plenty of complicating things that resulted in multiple opinions. Wherein all the speculations landed on the life of Blink. People started coming up with different opinions related to this character. And the movie has ended in such a way that it forces the viewers to make up the storyline themselves. All these life-threatening situations gave them multiple problems. Throughout the whole movie, the viewers interpret the confusing plotline.

But they won’t have a definitive ending. Moreover, Blink’s disappearance in the movie created a huge ruckus in the minds of all the fans. The ending of Cut Throat City was pretty ambiguous. Well, Judging by the ending, it seems Blink has passed away. And now his family has moved on with life without him. But there were some other speculations. And according to them, Blink didn’t die. To make it even more confusing, Blink released his new book. As the story moved on, Andre lost his life in the heist.

Since one of their friends is killed at the shootout, this provides a way for everyone to get away with their crimes, as none of them was convicted. But still, things didn’t turn out like that. For the last time, everyone decides to go for the last heist. But this was by far the worst decision that they ever took as a group. Moreover, everyone was arrested by the cops. Towards the ending of Cut Throat City, it seems RZA left the whole ending for the public to interpret.

Interpretations For The Ending

Well, there were multiple opinions. Specifically when it comes to the ending of Cut Throat City. To understand the finale, people had to direct their whole minds on all the plot links. But still, certain aspects led to loopholes and poor execution. Certain points highlighted the fact about Blink’s death. It seems like the final heist never really happened. To make it easier, Blink was offered a second chance by Detective Benoit. And it seems like Blink reconsidered this chance and chose to leave the heist behind.

Moreover, the trio is alive because the post-credit scene depicted that Miracle didn’t die. The whole heist was imaginary. It was something that Blink chose to display in his graphic novel. Moreover, Blink came forward with his gratitude towards Detective Benoit for helping him out with his life. These points added more emphasis as a clue to figure out the ending of this action-oriented movie. Moreover, the cover of his novel said CTC as in Cut Throat City. The conversations between Benoit and Blink played a very important role. But still, many people argue about the ending. For those, Blink left his family for Demyra’s dreams. Moreover, this confusion led to a lot of critical opinions from the viewers.

Also Read: The Ending of ‘Hustlers’ Explained: How Is The JLo Starrer Movie So Unique?

Party A Who Lives Beside Me Episode 15: What’s Next For Our Urban Young Duo In Love?