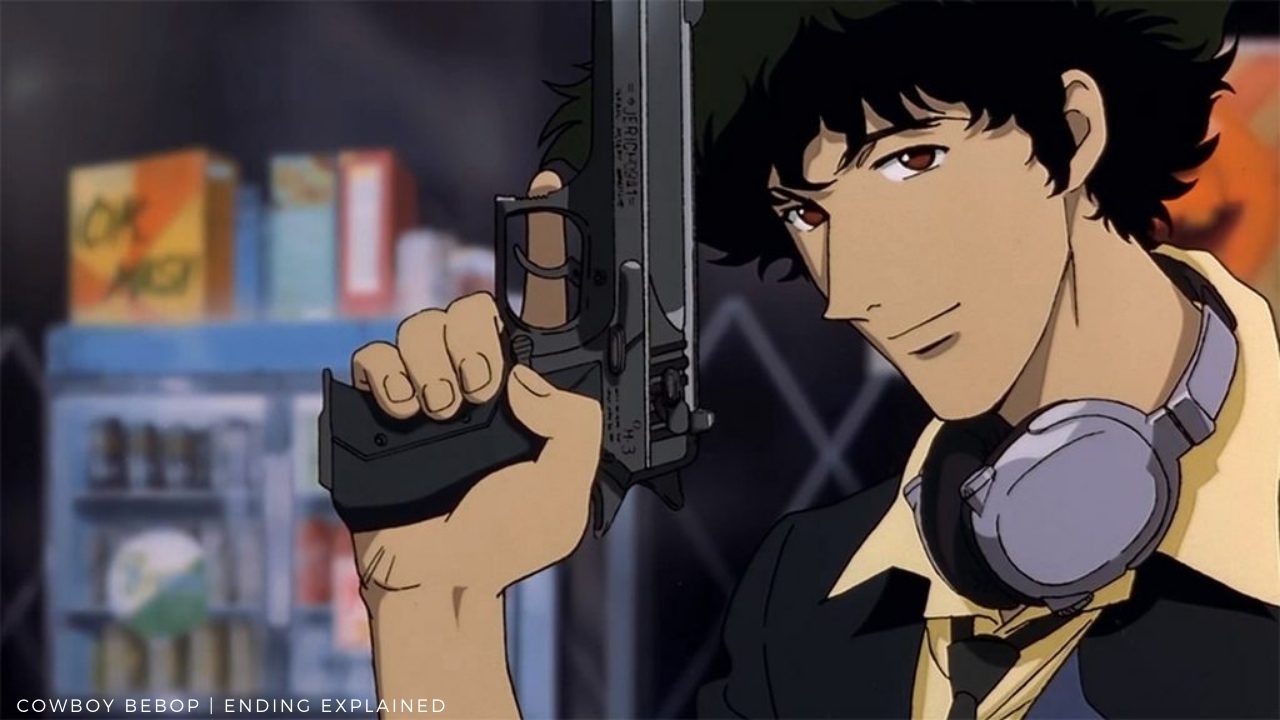 What is the Cowboy Bebop ending and plot? This Western Space Noir movie has had a huge fanbase since it came out on April 3, 1998. What comes to your mind after hearing a series about Space Cowboys? Without a doubt, the name Cowboy Bebop comes to all our minds. Shinichiro Watanabe directed this 1990s shojo anime series with the Sunrise studio. The series has only six episodes and a movie, which takes place between the events of episodes 22-23. The movie has gained attention because of its unique blend of three genres: Western, Noir, and Sci-fi, which are all different genres and no one would ever think of blending these three together. If you haven’t watched the anime, then you should first watch it on Hulu or Prime Video because this article contains many spoilers, which might ruin the first-time experience of enjoying this masterpiece.

The story is set in the year 2071, where Earth is inhabitable because of an accident with a hyperspace gateway. Thus, humanity isn’t limited to Earth and spread throughout space, colonizing inhabitable planets and satellites. However, criminal activity across the space has a rise in level. So the space police or the Inter Solar System Police (ISSP) sent out contracts for bounty hunters to hunt down criminals for reward. So this anime series also follows the journey of a group of such bounty hunters. However, the plot might sound simple, but it’s full of philosophy, and even the ending leaves the audience in question. So we will get the Cowboy Bebop Ending Explained today.

What is the plot of Cowboy Bebop?

As we said, the story is set in the future, where legalized bounty hunters are chasing down criminals for reward. Furthers, these bounty hunters are also called “Cowboys”. It seems like people of the future are fans of Western horse riders. The story revolves around such a duo of bounty hunters, Jet Black, a former ISSP, and Spike, a former hitman for Red Dragon Crime Syndicate. The two works from their spaceship, Bebop. While on the journey across the space to hunt criminals, they come across an amnesiac girl, Faye Valentine, and a genius hacker girl, Edward. Later on in the series, a genetically engineered Corgi, Ein, with the intelligence rivaling a human board the Bebop.

As the story continues, the team ends up losing all their money, and the ghosts from their pasts keep haunting them. We get to know Faye was in cryogenic sleep prior to joining Bebop because of a fatal injury she faced 50 years ago in an accident. Further, Faye lost her family in that accident, and she was the sole survivor. Later, Spike also parts ways from Bebop to settle his score with his former partner, Vicious, from Red Dragon Crime Syndicate. Spike’s past reveals he and Vicious were once friends but romance blossoms between Spike and Vicious’s girlfriend, Julia. 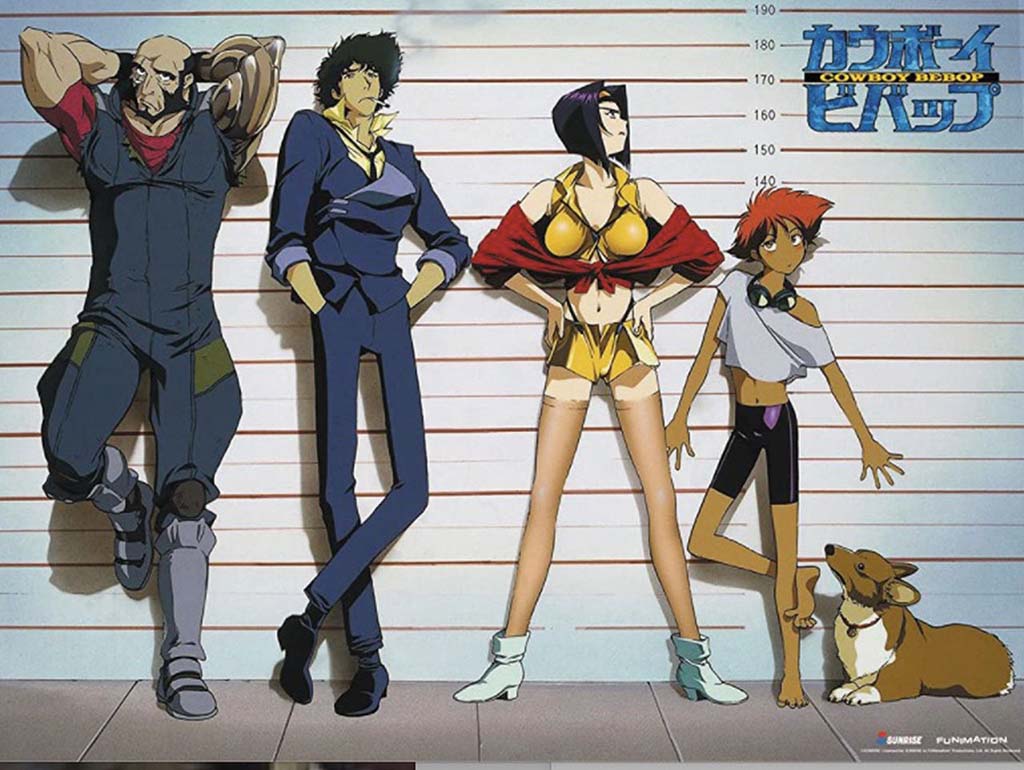 The crew of the spaceship, Bebop.

Spike and Julia planned to leave the criminal organization. But according to the syndicate’s rule, a member can only leave the group with death. Thus, the syndicate sends med after Spike to eliminate him, but he fakes his death and escapes. Soon, Vicious take charge of the syndicate after a coup and knows about Spike being alive. Thus, he asks Julia to eliminate Spike, but Julia runs away. The series again moves to the present, where Julia reunites with Spike. But Vicious, who is now the leader of the syndicate, sends his men to kill the couple, in which Julia dies.

Spike swears to take revenge for Julia’s death and infiltrates the base of Red Dragon Crime Syndicate. Spike reaches the top floor of the base and comes across his former friend and now arch-nemesis, Vicious. An epic fight sequence breaks out between the two, and Spike finally kills Vicious. However, Spike himself was fatally injured and fell down to the ground while coming down. Meanwhile, Faye leaves for the Earth to see the barren land, where once she had a life. Edward sets on a separate journey to find Ed’s father. Thus, Jet Black is the only member on the spaceship Bebop.

Cowboy Bebop’s ending left us all in a state of confusion. As in the end, we see Spike seriously injured and falling to the ground. Therefore, many believe our beloved Cowboy died after his great fight with Vicious. But many also believe that he’s only unconscious. Further, he will either become the new leader of Red Dragon Crime Syndicate or Jet will come to his rescue, and the two will again form a two-man team like they were at the beginning of the series. 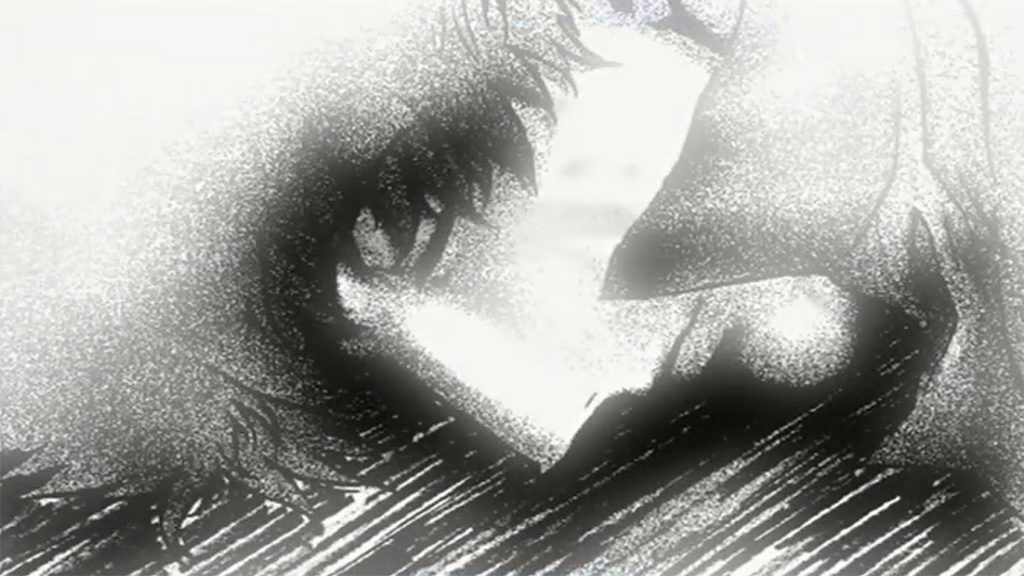 Spike collapsed after his fight with Vicious.

It’s been 20-years since the show aired, and we never heard about any sequel. Therefore, we can assume that Spike actually died and the rest of the crew of Bebop went their separate ways. Even Shinichiro Watanabe once mentioned in a Comic-Con interview that he had the ending in mind even before developing the whole story. Further, the crew was against Spike’s death, but he doesn’t want the protagonist to live a peaceful life like the majority of animes did.

However, the ending never clearly portrayed Spike dying, leaving a loose end. Further, Strike always had this philosophical question of whether he’s dead, alive, or just asleep. In the Cowboy Bebop ending, our protagonist might just be asleep of fatigue from his fight against Vicious. Thus, Watanabe can continue the story if he ever feels to make a sequel to this masterpiece. We might witness the whole Cowboy Bebop gang assembling once again to face new challenges. But now, there are no such plans, so the only thing we can do is rewatch the Western Space Noir masterpiece.