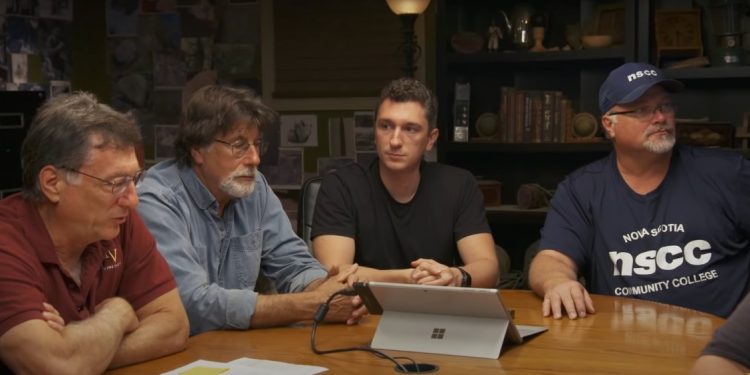 In the sixth episode, the Laginas will continue their hunt for the Money Pit. “The Fellowship of the Dig” will be renamed the “Wizards of Osmium,” all puns intended. The Laginas will investigate the startlingly large amounts of osmium discovered on the island in The Curse of Oak of Island Season 9 Episode 6. Furthermore, the material is one of the periodic table’s rarest naturally occurring elements. However, it is unknown how it ties to the Money Pit.

The team may learn that they have been reading the Zena Halpern map incorrectly, which will undoubtedly result in substantial modifications to their strategy. We will have much more heavy equipment operating all around the island in previous and forthcoming episodes. With the finding of a rare mineral whose origins are unknown. For these scavenger hunters, the risks are considerably greater.

The Curse of Oak Island Season 9 Episode 6 will release on December 7, 2021, at 9:00 PM, Eastern Time, United States on The History Channel. To begin, every new episode drops on a weekly basis on Tuesdays. Secondly, this episode’s title is “The Root Cause”.

To watch The Curse of Oak Island Season 9 Episode 6 on TV, go to the History Channel at the above-mentioned time and date. Even if you miss the original broadcast, you may watch it on the History Channel website or the History Channel app. You can also watch the episode online via DirecTV, Spectrum, Sling TV, Xfinity, and Philo TV. Season 9 episodes are also available to buy or rent on Video-On-Demand platforms such as Microsoft Store, Vudu, Amazon Prime Video, and iTunes. If you wish to catch up or rewatch the program, the first seven seasons are available on Peacock TV.

This episode of Season 9 of The Curse Of Oak Island begins with the Lagina brothers dissatisfied with their inability to dig in the marsh region. They were barred from excavating after uncovering the remnants of an archaeologically significant pot. Since then, they’ve been feverishly looking for a viable replacement, as shown in the last episode.

Meanwhile, diggings at the Dunfield spoils uncovered wood, a cribbing spike, and a chisel. According to the scientists, the chisel was used to cut out a 9-foot footstone. In addition, just to refresh our memory in The Curse Of Oak Island Season 9 Episode 4. The Laginas looked into the origins of the gun stone they discovered before. The rocks turned proven to be non-native and would have been dropped by a negligent Portuguese marine captain.

During the borehole digging, however, the crew uncovered an unusual find. They dug through the muck and discovered the wood and tiny metal fragments. The metal’s contents were then examined by an expert. The examinations found that the metal included trace levels of gold and significant concentrations of osmium. The specialist traced the gold’s origins to South America. They claimed that the Spaniards took the gold from indigenous South Americans. The gold would eventually end up in the hands of the Portuguese, who buried it on Oak Island.

Is The Curse of Oak Island a scripted show?

Because of the treasure hunt’s history, we know Rick and Marty Lagina have devoted their time and money to the reality series. They have also discovered coins, a brooch, and other items that are thought to be centuries old. As a result, we know that the show’s main concept is true.

The Lagina brothers claimed they had been working on the island for almost three years before being asked to produce the program. The brothers had no desire to become famous, and they were even less interested in appearing on television initially. They did like how the series allowed them to connect with additional individuals who are as engaged in the mystery as they are.

Real as it gets

Everything we see on the screen is an accurate depiction of the events on the island, including the digging and conversations in the war room. While the brothers conceded that it is a “very genuine program”. They also said that the production occasionally interfered with their timetables and schedules since it takes time to set up the microphones and cameras.

However, the show has aided in the acceleration of the timeframe for some tasks. Particularly the little work that they would have done at some point but not as quickly. Because the program required additional material, they were expanded and pursued more vigorously. Marty Lagina also said that they were certain from the start that they would not produce a scripted program. As a result, fans can be guaranteed that the series is real and, in some ways, immerses viewers in what is truly occurring on the island.