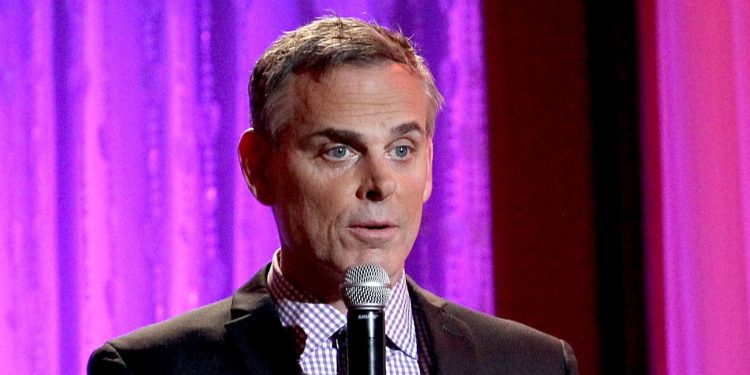 The handsome Colin Cowherd is a US-born sports media personality. He received a lot of attention for his role as the host on The Herd with Colin Cowherd, which broadcast on Fox Sports Radio and Fox Sports 1. Talking about his early life, Colin was born on January 6, 1964. He spent most of his childhood in the Bay Center, located in Washington. The name of his parents is Charles (father), who is an optometrist, and Patricia (mother), who is a housewife. Colin grew up along with his older sister, named Marine. Nowadays, he is making news for his professional life and net worth. What is Colin Cowherd’s Net Worth? Unfortunately, Colin’s parents separated their ways when he was very young. Then, his mother became responsible for his upbringing.

However, not much is said about his early days and childhood. However, it would not be wrong to say that he had a proper upbringing which was an integral part of his success. In the way he showcases his talents and skills, there is no denying the fact that he has had an outstanding educational opportunity to nurture, develop and direct his talents in the right direction. This helps him to achieve what he has always wanted and dreamed of. In his youth, he developed a passion for listening to baseball on the radio. After graduating from high school, Cowherd attended the University of Eastern Washington. Colin and his wife Anne have been married since 2010 and have six children. Cowherd has two children from a previous marriage, and Ann has four.

The sports radio host Colin Cowherd earns an estimated net worth of $25 million. His success in his career had helped him to amass a lot of wealth. He earned this amount through his career as a radio host. At ESPN, Colin’s maximum salary is $2 million a year. After joining Fox Sports/iHeartRadio in the year 2015, he was awarded a $6 million per year contract for four years. With a year remaining on his contract, Colin signed an extension with Fox Sports/iHeartRadio in 2018 that will continue to pay him $6 million a year.

The contract also gives Colin an ownership stake in his show, which gives him a percentage of the event’s net income. Cowherd made a lot of money as an experienced game host and announcer by demonstrating his charismatic skills. In December 2018, Colin and his wife Ann had paid $6.525 million for a house in Manhattan Beach, California. They put the house for sale for $6.999 million in January 2021 and reportedly have a contingent offer in under a week. They also own a ski vacation home at a resort in Park City, Utah, which was purchased in 2017 for an undisclosed amount. Cowherd currently lives with his family in Los Angeles, California, in a house that he plans to sell for $4.25 million.

Cowherd commenced his career with the San Diego Padres by acting as their play-by-play voice. After joining the KVBC television station in Las Vegas, Colin became sports director and won five Nevada Sportscasters of the year. Cowherd has also worked as a sports presenter for WTVT in Florida and for KGW-TV in Portland. In the year 2001, his thriving radio show “The Herd” switched to KFXX radio.

Cowherd joined ESPN Radio in 2003 and hosted The Herd with Colin Cowherd from 2004 to 2015. ESPN later added television shows that aired on ESPNU. From 2009 to 2012, he also hosted ESPN2’s SportsNation. In the year 2013, Cowherd began hosting ESPN’s “Colin’s New Football Show .” After leaving ESPN in the year 2015, Cowherd joined Fox Sports on a four-year contract. He began hosting “The Herd” on Fox Sports 1 and Fox Sports Radio at the same time and has appeared on shows such as “Fox NFL Kickoff” and “Speak for Yourself with Cowherd & Whitlock.”

In the year 2015, Colin Cowherd was awarded the Sports Illustrated Radio Personality of the Year. He had won the Nevada Sportscaster of the Year five times because he was nominated by the national sportscaster and sportswriter association. Throughout his career, he has always maintained the highest level of professionalism in his work. His work has always been admirable, and his hard work is reflected in how well he has done in his career.

Cowherd has always maintained a decent and admirable image for himself throughout his career, without attracting rumors or controversy. Instead of being accidentally noticed, he made everyone believe he had no interest in being a controversial figure. However, he has been criticized for making malicious comments about the deaths of famous WWE Superstars Eddie Guerrero and Sean Taylor. Also, Colin Cowherd is very popular on social media networks such as Twitter, Facebook, and Instagram. Cowherd has more than 1.5 million followers on Twitter. Also, he has thousands of followers on Facebook and has around 176k followers on his Instagram account.