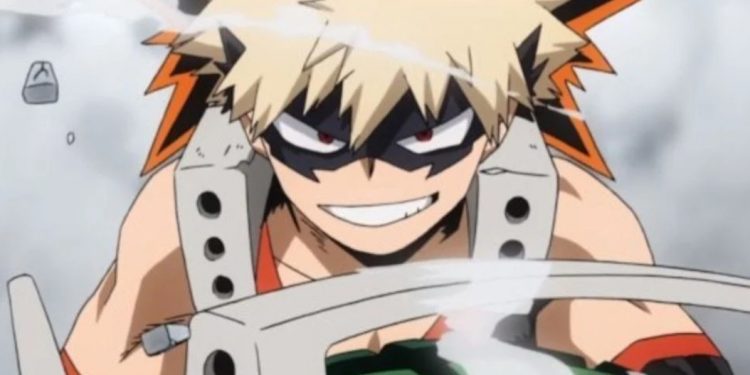 My Hero Academia Chapter 337 reveals the student’s training after discovering Tomura and All For One’s incident. The training begins after All Might meets with the students and gives them seven days to improve. During the training, Bakugou talked about his Cluster technique. From My Hero Academia’s latest chapter, Todoroki joins the training and aims to improve his powers. Kaminari and Mineta talk about the current situation. They talked about All For One and Tomura Shigaraki and that Gigantomachia, who is imprisoned sleeping.

They believe that they will have the upper hand during the battle. Bakugou joined the two and had his say after realizing they could not find All For One and Shigaraki’s hideout. The Heroes realize that they failed to find the Villains after All Might defeated them in the past. Bakugou also reminds them that Shigaraki became weak after his battle with Star and Stripe, but it is still challenging to face Tomura and All For One. They are also worried about the number of heroes and think it is better to wait for Tomura to attack.

Deku arrives and reveals that he is ready to fight with All For One and other Villains. Lida pats Deku’s head since he wants to do things singlehandedly, but they have to work together. On the other side, Hagakure finds himself in the forest, and she has been facing troubles after the battle. She saw three people talking, and one of those people said he would give orders and no one would suspect him. Hagure realizes that guy was displeased when Deku returns to U.A Academy. Hagakure approaches that person and wonders if he is okay, and that also finds that Aoyama is the tractor.

Previously on My Hero Academia Chapter 336

Those three people were talking to Aoyama and his family. They told Aoyama to follow All For One’s orders or else they would die. Hagure listened to those guys talking to Aoyama, and she heard that Aoyama has been working for All For One and must continue to do so since everything begins in the first year. Aoyama thought that he had carried out all of his orders and he would be free. But he shed tears that he has to continue and reveals that he cannot follow All For One’s orders.

Aoyama’s parents try to convince him since it is a matter of life and death but they have to do what they have to. Aoyama’s past was revealed, and he was born with no powers. His parents get worried about her, and they want Aoyama to be happy, and they go to All For One and ask him to grant their son powers. All For One accepted their offer and made a contract with them after giving Aoyama a Quirk. Aoyama realizes that he has been giving all the information to the teacher until someone approaches him.

In the present day, Aoyama shed tears revealing how he has suffered and has to continue to do everything since All For One might kill his parents. But he thought that he would be in peace after All For One got defeated. But that didn’t work since All For One will awaken, and he has to continue doing those orders. His parent’s apologies for the things he has been through. Deku arrives at the scene after Hagakure calls him. He talks with Aoyama reveals the traitor that Hagakure tells him about. Deku asks Aoyama if it is accurate, and Aoyama is speechless while his parents deny everything.

Also Read: Seichi vs. The Leader of the Valkyries Begins In Episode 10 of The Fruit of-Evolution: Before I Knew It My Life Had It Made.