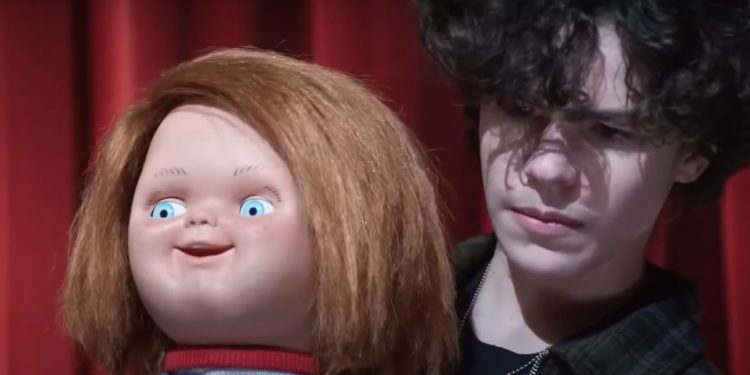 When Don Mancini’s 1988 horror slasher film “Child’s Play” came to the big screen, the movie became a genre hit. Nearly three decades and six films later, we now have to talk about Chucky Season 3. This SyFy small-screen adaptation of the diabolical serial killer doll just got renewed for a third season of even more gory killings. In the tv adaptation, a teenager stumbles upon a Chucky doll at a garage sale and wants to use it for an art project. And then the doll becomes alive.

Chucky unleashed extraordinary havoc in the town where this teenager lives, exposing the townsfolk secrets, contradictions, and prejudices. When Jake the teen finds out that the doll is possessed by the soul of serial murderer Charlie Lee Ray, the boy becomes a person of interest for the authorities as the body count starts stacking up. Now on its upcoming sixth season, the stakes are higher for Jake Wheeler.

Chucky Season 3 will release sometime in 2023. To begin, the production company made an official announcement via Twitter stating that the diabolical doll possessed by the spirit of Charles Lee Ray will come back to cause even more terror and gory killings on the SyFy channel and USA Network for a second season. If you’re excited for the third season of Chucky, you first got to wait and see season 2, which is the latest renewed season for this slasher series.

As soon as the producers and SyFy drop an actual date, we will post an update here for you. In the meanwhile, check out the tweet from the official Chucky Twitter account. Lastly, Don Mancini, the man who wrote the original 1988 movie and all six sequels, will continue to work as the executive producer and showrunner.

i always come back 😈 new season of #chucky coming 2022 pic.twitter.com/x24mc3uCVN

Who will be cast in Chucky Season 3?

With this renewal, the bulk of the main cast will reprise their roles of the third installment of the adaptation of Don Mancini’s Child’s Play to the small screen. Firstly, Zachary Arthur will play Jake Wheeler, Jennifer Tilly will play once more Tiffany Valentine. Andy Barclay will be played by Alex Vincent, Kyle will be played by Christine Elise. Moreover, Teo Briones from Ratched, Devon Sawa from Final Destination, Alyvia Alyn, and Björgvin Arnarson will also return to their roles. Lastly, Brad Dourif will voice once more the voice of the malevolous Chucky.

Where to Watch Chucky?

Chucky is on SyFy and USA Network on television. You need to check your local listings to see when it airs again. Now, if you wish to watch it online, on your own time. There are a few options. Firstly, the show is available on Peacock starting this December 1, 2021. Secondly, the first season is also available for rent or purchase on iTunes, Fubo TV, Vudu, and Google Play.

Junior condemns Jake for the tragic deaths at Bree’s funeral. Tiffany appears unexpectedly and kisses Logan. Andy abandons Kyle at a petrol stop and travels alone to Hackensack. Devon is preparing to leave Hackensack and go to New Jersey to live with his aunt after his mother’s death. Mayor Michelle announces at a press conference that the annual municipal screening of Frankenstein will include a star visitor.

Chucky introduces himself to Junior and persuades him to murder people he feels are to blame for his family’s disintegration. Jake takes money from Logan and flees the house; however, he reconsiders after purchasing a strange Good Guy doll and bringing it to Lexy’s residence. Devon’s whereabouts are sought after by both children, who discover that he has broken into Chucky’s boyhood house.

Meanwhile, Devon has been kidnapped by Charles, who has reclaimed control of Nica’s body. Chucky persuades Junior that Logan cheated on Bree with Tiffany, resulting in her “suicide”; Junior then beats Logan with the doll. As Jake and Lexy prepare to go to Devon’s house, the beauty Jake brought starts to come to life. When Andy arrives at the Wheeler residence, Devon is encircled by a swarm of Good Guy dolls.

Andy comes to the Wheeler house seeking Chucky, but if he’s not located, he departs and warns Junior not to approach Chucky if he is sighted. Meanwhile, the doll Jake brought to the Cross house comes to life. But he is shot dead by Kyle, who exposes Chucky’s voodoo talents before drugging the pair to keep them safe. When Tiffany returns home, Nica, disguised as Chucky, tries to murder her, but Chucky and Junior deal with the problem.

72 Chucky Dolls to deal With

Tiffany shows Chucky his cult, which comprises 72 dolls, to carry out Chucky’s plan: the dolls will be donated to needy children around the nation. Chucky urges Junior to murder Nica when Tiffany accuses him of being self-centered, but Tiffany beheads the doll before harm can be done. She explains that she notified the authorities of Chucky’s whereabouts in 1988, which resulted in the death of his first corpse. Tiffany lays a bomb in the cellar, which explodes and seems to murder Kyle and Andy, who save Devon just before the blast.

Junior and then another Chucky doll lure Lexy away from the Frankenstein showing and hold her captive behind the theater screen; as Lexy’s father comes, Chucky dives beneath the theater seats and starts stabbing and murdering many people, including Lexy’s father. As Jake and Devon arrive, the latter pulls Caroline away as Jake tackles Chucky in the theater.

Also Read: Alex Rider Season 2: Everything You Need To Know

Lexy persuades Junior to do the right thing, and he stabs Chucky to death before getting stabbed himself, and he apologizes before dying in Lexy’s arms. Jake ultimately kills Chucky before learning about Junior’s death from Lexy. Meanwhile, Andy, who survived the blast, intercepts the delivery vehicle and foils Chucky’s plot. But the Tiffany doll appears and kidnaps him with a revolver.

Tiffany discloses that she had severed Nica’s limbs the next day out of dread of what Chucky will do if he reclaims Nica’s body. Finally, Lexy, Devon, and Jake pay their respects at Junior’s grave before a clenched fist emerges. Chucky concludes the season finale with an epilogue recapping the series’ killings.

Don Mancini’s “Chucky” series has covered a lot of territory in only seven episodes. Jake Wheeler (played by Zackary Arthur) overcame his loneliness and wrath to find a home with Lexy (played by Alyvia Alyn Lind) and Devon (played by Bjorgvin Arnarson). Tiffany (played by Jennifer Tilly) was once again unable to get the love and respect she craved from Chucky (played by Brad Dourif), prompting her to resort to a scared Nica (Fiona Dourif). Then there’s Andy (Alex Vincent) and Kyle (played by Christine Elise McCarthy), who’s gone on a cross-country road trip to snuff out every fragment of Chucky’s fractured soul, unknowing that Tiffany has been assisting him in building a new army.

Everything comes to a head in “Affair to Dismember,” the explosive conclusion to the show’s first season – a second is on the way! – That ties up loose ends while raising new questions. Chucky brings the patricidal Junior (Teo Briones) back to his boyhood home to meet Tiffany, a Chucky-inhabited Nica, and a whole squad of Good Guy dolls prepared to do his bidding in the climax. Chucky’s primary purpose is eventually realized in phase one of their diabolical scheme, which targets the town’s Frankenstein fundraising showing. Unfortunately, even a few severe hiccups along the road will not be enough to put a halt to this bloodbath.

The whole season hasn’t given much attention to heritage players Andy and Kyle, and the finale emphasizes that even more. Despite ultimately arriving in Hackensack to confront Chucky, although separately due to last week’s ambiguous twist, neither individual seems very important to the storyline. Chucky and Kyle appear unnecessary to the first season, except for a few moments of fan service and one rushed-through scenario that raises significant problems. However, as the necessary setup for a second season hints, such will not be the case in the future.

“An Affair to Dismember” focuses on the tale that started with “Chucky,” with Jake and Hackensack finding closure somehow. Whereas other components may seem hurried, this defining arc is given a chance to breathe. Since the premiere, Jake, Lexy, and Devon have come a long way. Jake and Lexy discovered strength in friendship after letting go of the hatred in their hearts. It enables Jake to see Chucky’s acceptance of him and his sexuality for what it is—emotional manipulation—and confront him once and for all.

The fundamental issue flowing through “Chucky” is nature vs. nurture, which comes to a happy end for Hackensack. The corpse count hits an all-time high, and the conclusion assures that the series will be remembered. Not everyone escapes, leaving just a few survivors when the dust settles. The one shortcoming is an unsavory offing that occurs so quickly and clumsily that it must be a hanging thread.

More will come in the next season.

“Chucky” has a lot to handle throughout eight episodes, with flashbacks, Hackensack’s primary plot, Chucky and Tiffany’s manipulations, and supporting tales by heritage figures. Moreover, the climax had to cover a lot of terrain to land on its feet. As a result, some elements are hurried, and the legacy narratives eventually serve as connecting threads across seasons. An essential but slow-burning record designed to drive the significant plot.

“Chucky,” on the other hand, juggled all of its disparate components masterfully and provided no lack of creative killings, one-liners, personalities, and the killer doll delighting in his newest death spree. Tilly equaled him in almost every aspect, as did Dourif’s outstanding performances as Nica, Nica-as-Chucky, and Charles Lee Ray himself. Mancini’s innovative, one-of-a-kind vision instills implicit faith in the franchise’s future and is virtually always a delight to see.

Meanwhile, the series’ showrunner never fails to surprise; the finale’s third act includes an unexpected but very welcome gift. The decision to stage a final bloodbath in a theatrical screening of James Whale’s Frankenstein? A brilliant and subtle stroke of genius. Is there going to be a last, deliciously demented coda? A perfect encapsulation of how season one leaves you: with a smile on your face and eagerly anticipating season two.

Also Read: Will The Feds Find Out Who Sent The Anthrax in The Hot Zone Season 2 Episode 5?