The fans and the viewers are waiting for the release of Chicago Med Season 7 Episode 8. This is not a surprise, considering the events of the previous episode that got the audience excited. We saw the return of an old and favorite character on the show. This has the fans wondering how things will move forward in the season. Furthermore, they are also wondering whether there will be any more return of old characters on the show. The show has had quite a popularity since it first arrived on 17th November 2015.

This American television series follows the genre of medical drama and has been counted among the top medical drama tv-shows around the world. The pilot episode of the show garnered a viewership of over 8.6 million in the U.S alone. The well-known American tv writers and producers Dick Wolf and Matt Olmstead have jointly created the series. Furthermore, they are also the executive producers on the show, along with Micahel Brandt, Derek Haas, and many more. The ongoing seventh season of the series has been keeping the fans hooked with all the drama that goes on in each episode. Therefore, the fans are not eager to watch Chicago Med Season 7 Episode 8. However, let us first take a recap of episode 7 and find out what all happened. 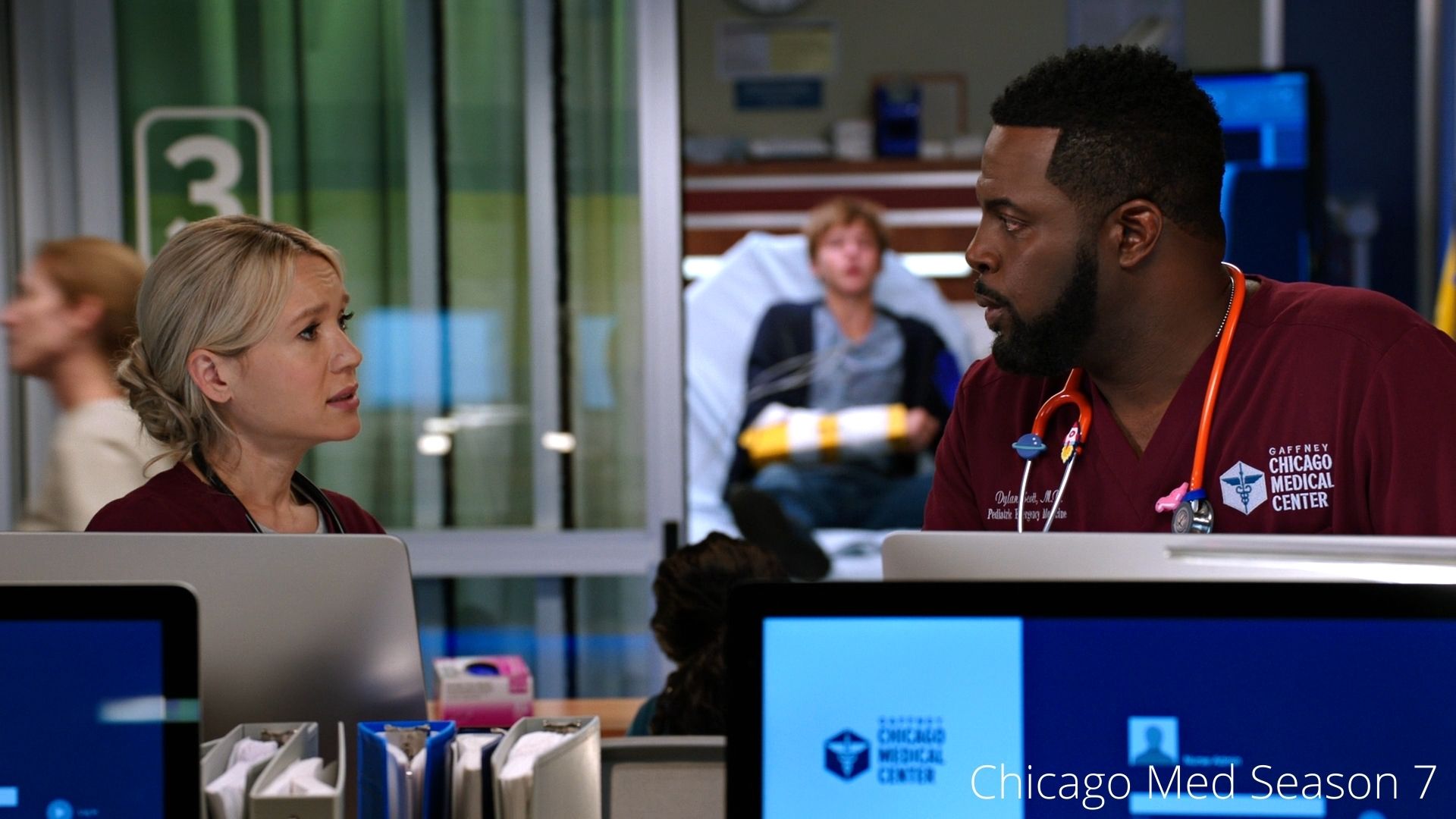 Episode 7 of Chicago Med Season 7 came out on 3rd November 2021. Furthermore, the episode was titled “A Square Peg In A Round Hole”. The episode began with Stevie and her mother Terri living together after Terri’s van was towed. Meanwhile, at the hospital, Vanessa learns from Maggie that some people do know that they are related. On the other hand, we see Dr. Choi return to the hospital after his injury. Everyone seems to be excited and happy to have him back.

Whereas Sharon and Will have a talk about how does Matt feels about his decision of using the Vas-COM that might have killed Eleanor. Later on, Sharon announces a ban on the use of the Vas-COM until everything is verified. However, Matt’s father in law who is on the board, arrives to inform her that the board is holding the decision to ban the device until an investigation. On the other hand, Dr. Marcel and Dr. Blake successfully perform the liver transplant on Blake’s patient.

While we see another patient named Astrid arrive at the hospital with a psychotic episode and injuries. However, Dr. Charles and Vanessa successfully discover the real cause behind her condition. On the other hand, we see Matt pass out after having cocaine in front of Will while Will is trying to make him tell the truth about Vas-COM promotion. However, he is brought to the hospital, and they save him just in time. At the end of the episode, we see Stevie tell her mother the truth that she got her van towed to bring her home. This makes Terri angry and betrayed, and she leaves the house with her clothes.

Chicago Med Season 7 Episode 8: When Will It Release, What To Expect & Release Time

The previous episode had quite a dose of drama that had the fans very much excited for the next episode. “Chicago Med Season 7 Episode 8 will release on 10th November 2021 on NBC at 8 pm ET.” In addition to that, the episode will be titled “Just As A Snake Sheds Its Skin”. The next episode will get interesting as we will see Will and Sharon trying to find out what is going on with the Vas-COM project. Furthermore, we will see a lot of our favorite characters in crisis and pain. Therefore, stay tuned for the episode releasing on Wednesday.

The seventh season of the American medical drama series has got the viewers hooked and is making quite a buzz. That is why people are searching about where to watch Chicago Med Season 7? Well, we have a simple answer to that question for the fans. “Chicago Med Season 7 airs every Wednesday at 8 pm ET on the NBC television network.” In addition to that, the episodes are also available on the official website of NBC. Then we have the streaming services like Amazon Prime Video, Hulu, and Youtube TV, where viewers can stream the episodes. So go right ahead and start watching the season if you haven’t yet.

Also Read: Is Stella Leaving Chicago Fire in 2021? Is Miranda Getting Fired?

Phillip Schofield Partner: Who Is The Television Presenter Married To?