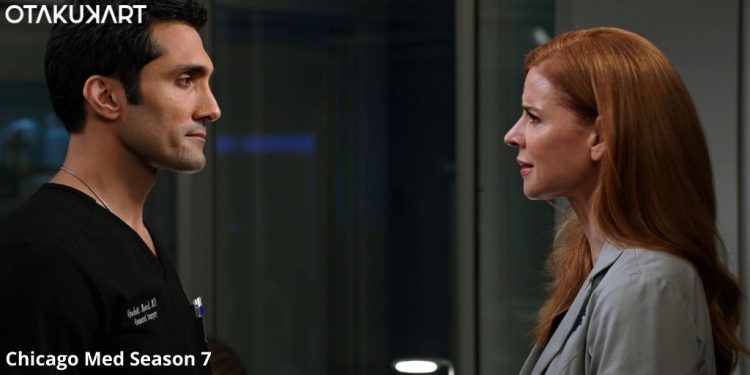 The viewers are quite excited about the release of the Chicago Med Season 7 Episode 11, which is going to be an exciting one. Whereas the recently aired episode gave us a look at the situation relating to the Vas-COM scandal at the hospital. Sharon had to face a lot due to her decision to expose the corruption to the FBI. However, the hospital staff and doctors were also under questioning from the feds.

On the other hand, the heat came on to Maggie and Veronica as well. The HR called in Maggie about her relationship with Veronica and the fact that she kept it to herself that Veronica was her daughter. Meanwhile, a patient named Lawrence was in serious need of a kidney transplant, but Marcel and Pamela had no other choice but to consider the patient’s kid Luke as a donor. But Luke was a kid with autism, and Lawrence was not prepared to involve him. So the question that remained was, did Lawrence get a kidney transplant?

The medical drama series is a part of the popular “Chicago” franchise that has been very popular. Dick Wolf and Matt Olmstead had created the show, and it premiered on 17th November 2015. Eventually, the show is now airing the seventh season after six successful seasons. However, the fans are now waiting to watch Chicago Med Season 7 Episode 11. But before discussing the release date, let us find out what went down in the previous episode.

Episode 10 of Chicago Med Season 7 came out on 5th January 2022. Moreover, the episode was titled “No Good Deed Goes Unpunished… In Chicago”. The episode opened with Sharon arriving at the hospital and facing the harsh questions from the media relating to the Vas-COM scandal. Meanwhile, Stevie was being questioned by the federal official about her knowledge of the Vas-COM and whatever else happened in the hospital relating to it.

On the other hand, Marcel and Pamela met Lawrence, who was in need of a quick kidney transplant as he did not have much time. Therefore, Pamela convinced Lawrence to consider his son Luke as the donor as he had no other choice. However, Marcel was not feeling good about it, seeing that Luke was autistic and got too scared when Marcel tried to take a blood sample from him.

Stevie and Will got a patient named Anel who had injured himself after hitting his head. Although, Anel’s tests showed that he had developed an early stage of Alzheimer’s disease. However, Anel’s son Emmanuel decided not to tell his father about his disease as it would kill him faster than the disease. But Stevie tried to convince him, and when she couldn’t, she talked to Anel’s fiance Fabienne. It turned out, Fabienne also agreed with Emmanuel as it was best for Anel’s health and future. On the other hand, Sharon got a visit from the new compliance officer Randall Shentu. Later on, HR called Maggie to question her about Veronica. Coming back to Lawrence, Marcel decided to go ahead with another procedure that would buy some time for Lawrence until he received a donor.

Luckily, a brutally injured patient arrived at the hospital, and Dean attended to him. His kidney was a match to Lawrence, and the surgery was completed successfully. Veronica also did a great job with a situation involving a hard-working mom and her young girl. It turns out, being close to her mother, Maggie had given her better judgment skills. In the end, we saw Marcel getting a dinner invite from Pamela’s daughter Avery. However, he politely declined it, which could be due to what happened between Marcel and Pamela last time. Meanwhile, Sharon and Charles came across Dr. Cooper, who had some rough words for Sharon.

Also Read: Who does Dr. Manning end up with in Chicago Med?

“Chicago Med Season 7 Episode 11 will release on 12th January 2022 on NBC at 8 pm ET.” Furthermore, the episode will be titled “The Things We Thought We Left Behind”. The episode will see Stevie and Charles come across patients that are facing side effects of surgeries performed by a non-licensed doctor. Meanwhile, Dylan will meet his old friends due to unpleasant circumstances. Furthermore, there will be a lot of drama involving the new compliance officer. So stay tuned to find out.

The popular series in the medical drama genre is attracting a lot of viewers around the world with the seventh season. That is why the viewers are searching about where to watch Chicago Med Season 7? Well, the answer to that is quite simple. “Chicago Med Season 7 airs at 8 pm ET on NBC every Wednesday in the United States. Moreover, the latest episode drops on the Peacock streaming service the next day. Whereas, the show is available to watch on Hulu and Amazon Prime Video. Additionally, the viewers can also stream the show on Youtube TV.

Also Read: Chicago Med: Who does Dr. Connor Rhodes End Up With?

Who is Zach LaVine’s Girlfriend? The NBA Player’s Love Interest