Amidst new anime, Chainsaw Man carries an unimaginable amount of hype. The hype is huge for people who have read the manga and also for those who have not. While manga readers grin at the glory of the masterpiece, non-manga readers dive with excitement at the very fact that the anime is being developed by MAPPA. Long after the anime’s announcement, we are finally getting close to knowing when it will be released. As previously promised, we finally have the Chainsaw Man trailer to blow our minds. The trailer came out on 27 June 2021 to tease us with random cut scenes, which were enough to leave our senses tingling. Even if the trailer lasted for barely a minute, those were the most heavenly seconds of brutality and ecstasy. For people looking for a push of hype, here is the complete breakdown of the Chainsaw Man trailer.

Once more, MAPPA brings us another anime where the protagonist dies in the introductory arc. Not that we are complaining because it seems like the gory genre is starting to grow on us too well. Chainsaw Man is based on the manga written by Tatsuki Fujimoto. The manga went on a break after completing the first part of the story, and some sources claim that it will be returning soon. Fujimoto’s manga is built differently. It has a very witty sense of humor, and the chapters continue to lure you to keep reading more despite the brutal violence it inks. Keeping in mind its very attractive characteristics, the Chainsaw Man anime might just become the most phenomenal anime of the season.

Here is a full breakdown of the Chainsaw Man trailer to give you a clue about what to look forward to in the anime.

Devils are beings born out of the fear of humans, and Devil Hunters protect humans by slaying these devils. However,  the Devil Hunters offer some parts of them to certain devils to form a contract and borrow their powers. Denji is born into this world without anything. He is poor and in deep debt left by his father. To repay the debt, he kills devils for the Yakuza. As a child, he takes up a dog-like devil named Pochita with a chainsaw on his head. However, when he is betrayed by the Yakuza and killed, Pochita sacrifices himself and merges himself with Denji as his heart.

Now revived with power, Denji turns into a devil-hybrid. He is found by Makima, who enlists him as a Public Safety Devil Hunter in Division 4 squad. Now as a devil hunter, 16-year-old Denji finds the life he had been looking for with a good house to live in and enough food to eat but threats on every mission he takes. 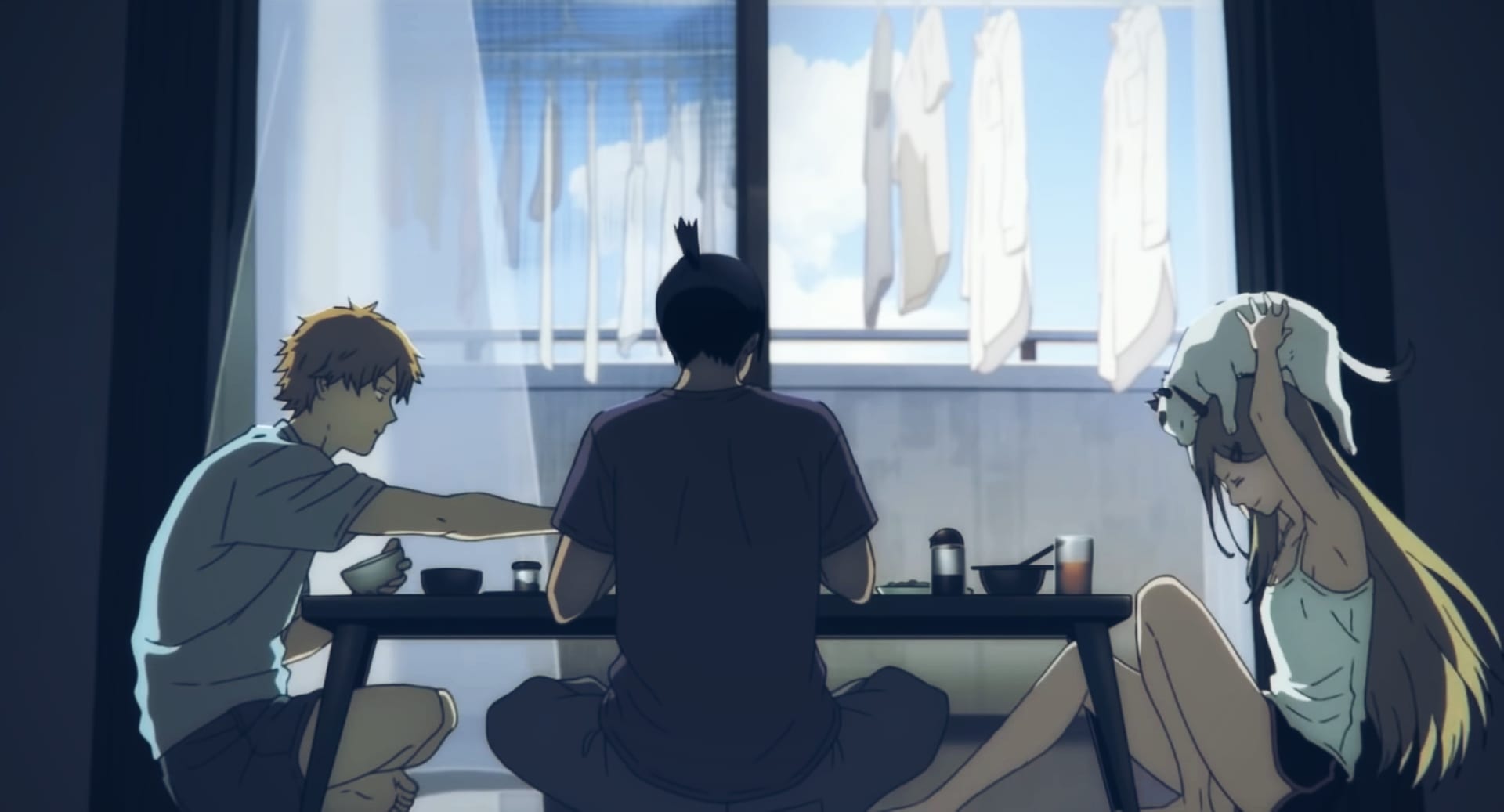 The Chainsaw man anime is scheduled to release in the fall of 2021. The trailer recently released was brilliant, and waiting for the anime just got even more exciting.

Breakdown of The Chainsaw Man Trailer

The trailer was a big piece of news for fans all around because we get to see what the anime is going to look like. It goes without saying that we are completely impressed by it. We get cut scenes depicting the different characters we will be meeting in the series. Most cut scenes are from the first few arcs, and it is not difficult to spot them. I love how the trailer was built without giving out much bit at the same time raising the hype with scenes that are sure to make us flip. The trailer gives us the first look at all the characters, so to understand the trailer better, we will also need to get familiar with them.

Here is the complete scene-by-scene breakdown of the Chainsaw Man trailer that has the anime community on a complete roll.

The first thing we see is a kid in a narrow ally surrounded by rats, empty cans, blood, and tall buildings. As the shot reaches farther, we see people walking on the roads. This is probably one of the earliest scenes in the anime when it will deliver the back story of Denji as a kid. We don’t see the face, but the sharp teeth and the ruffled blonde hair give away his identity. The next scene throws a black screen with the caption crediting Fujimoto Tatsuki for the story and the publisher of the manga, Shueisha.

The music breaks the trailers silence, and the scene changes to Aki Hayakawa’s apartment. The sink has unwashed dishes as Denji, Aki, and Power eat together. Aki is a Devil Hunter and a member of the Division 4 squad. Power, on the other hand, is a Blood Fiend and a Public Safety Devil Hunter belonging to the same squad. On Power’s head, we can see her beloved cat, Nyako, whose name is translated to ‘Meowy’ in the English version. In the next scene, we see something that is a lot talked about in the beginning, a slice of bread with a lot of jam spread on it.

Denji was someone who never had much in his life and had survived on only bread. Eating bread with jam was a luxury. After becoming a Devil Hunter, this jam-dripped slice of bread is his dreamy meal. So, if you were wondering why the trailer is focussing on a piece of bread, trust me when I say it’s got a meaning. I love how MAPPA decided to make sure we get a good introduction to the characters at first glance. 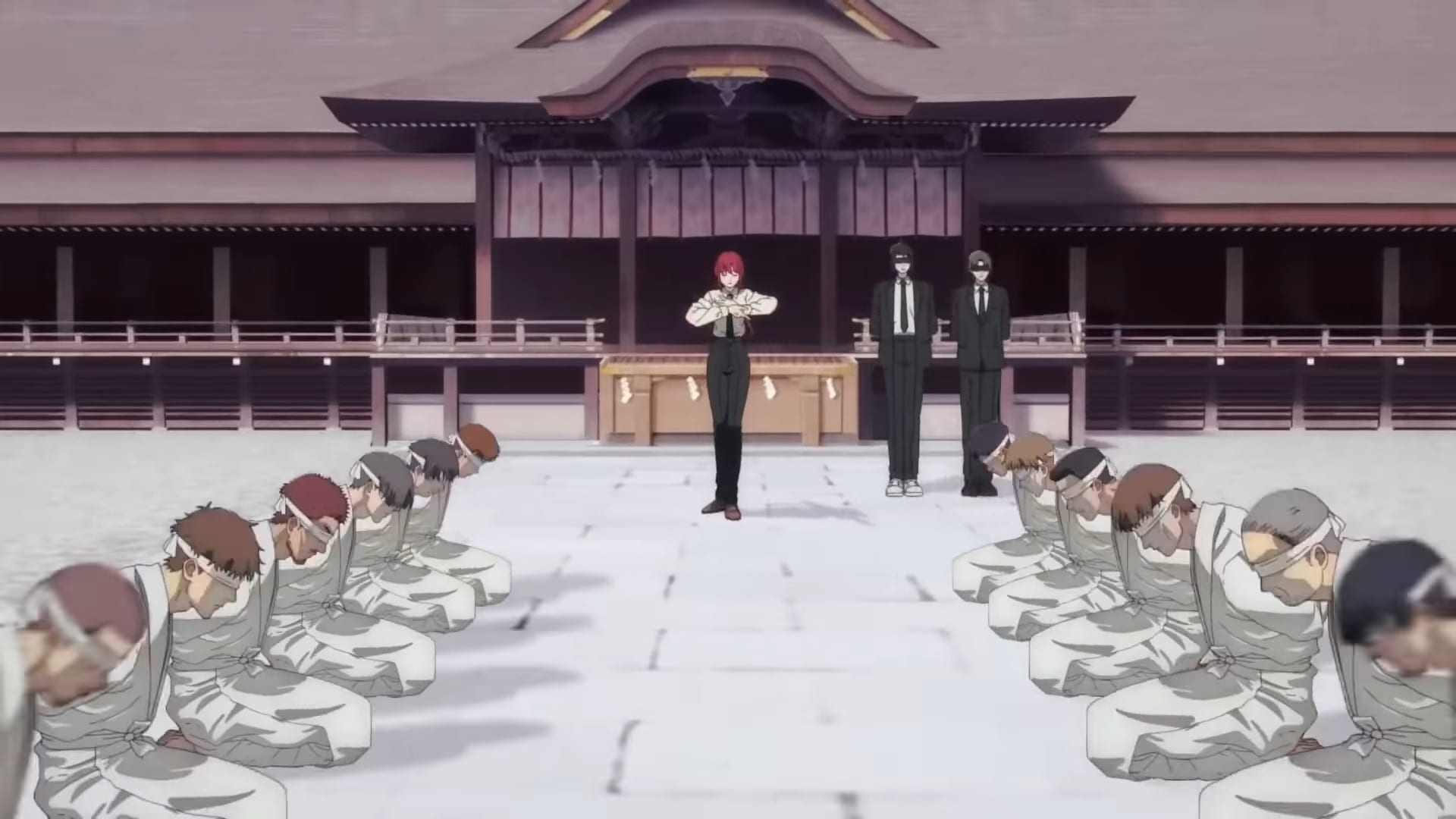 In the next scene, we see a warm look of Kobeni, Denji, and Power playing in the sea. Kobeni is another Devil Hunter from their squad. She has a timid and shy personality, but she is definitely a really good character that I’m looking forward to seeing more of. The scene changes to Himeno, another skilled Devil Hunter. Next to her is Aki smoking cigarettes. The scene transforms to a darker phase as we get a look at the devils next. The scene transformation of the trailer is given an artistic look instead of flipping scene after scene without stopping.

Scenes change to what looks like the Eternity Devil. We don’t want to spoil the anime, but this is definitely an interesting part of the show. The next scene focuses on a graveyard filled with crows. This graveyard makes multiple appearances in the manga, so it’s really not difficult to spot. A hand is seen holding a bullet-like structure engulfed in blood. This is a reference for the Gun Devil, which is the most dangerous devil in the series. Once again, another interesting part of the show that we do not wish to spoil. A house in the middle of the snow is seen getting destroyed, an incident related to the Gun Devil.

An immediate scene change gives us a look at two antagonists, Sawatari and Katana Man. Then we see Denji sleeping in his old house, holding Pochita. A scene before portrays a door with multiple notices.

Finally, we see one of the major characters in the series: Makima. The shot moves closer to her face and stops at her eyes. This is a scene from the Katana Man Arc. In the next scene, we see someone pull a sword-like something from their chest, and a huge head of a devil appears on top of a building. These two scenes, although they look unrelated, are in fact, related. The person wielding the weapon is Aki, and the devil in the next scene is the Fox Devil with whom he had previously formed a contract. The following scenes give us a look at Kishibe (the strongest Devil Hunter), Power jumping from above, Denji fighting another devil that looks like the Bat Devil, followed by Denji fighting another devil that looks like the Leach Devil.

In the next scene, we get a glimpse of Denji, Himeno, and Aki running from the Eternity Devil. The trailer also features an intimate scene between Makima and Denji. Makima is biting Denji’s finger seductively.

After a quick staff announcement, we see a completely new scene filled with gore as the music in the background intensifies. We see Denji in his Chainsaw Man form fighting against a bunch of people. This looks like his first transformation into this form because his opponents do not look like devils. The scene lasts for about 4 seconds as we see Chainsaw Man in its glory. The trailer ends with a close-up look into Denji’s devilish form.

The breakdown of the Chainsaw Man trailer made me realize how much effort has been put into the anime. Chainsaw Man trailer has more than 3.9 million views on YouTube already. Between the scene, the trailer reveals the staff members. We already know that MAPPA is animating the series. Ryu Nakayama and Makato Nakazono are directing the series. Hiroshi Seko is composing the anime scripts, and Kensuke Ushio composes its music. A lot of other staff details as well as the cast are to be announced.

From the breakdown of the trailer, we can confirm that the anime will feature the Introduction Arc, Bat Devil Arc, Eternity Devil Arc, and the Katana Man arc. Whether MAPPA plans to go beyond this arc or not is still a mystery, but even if they don’t, Chainsaw Man anime will be the treat of Fall 2021.

Now that the first PV is out, we can expect all other details to unfold as well. You can stay updated with all news about the anime by following their Twitter account or by checking out its official website.