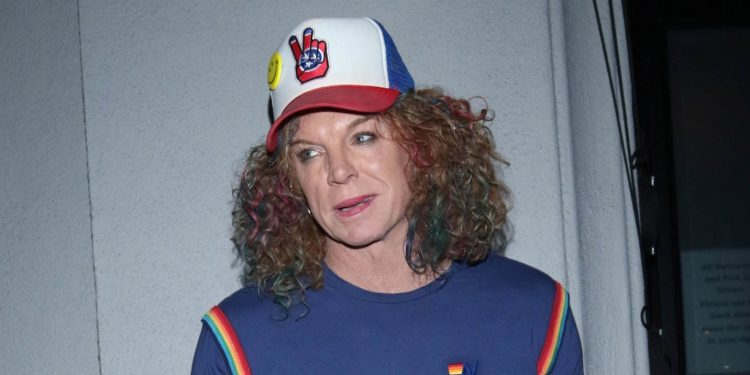 In the world of comedy, eliciting laughter with jokes and tell-tales is routine, but doing so with props is unusual. Carrot Top has not only excelled at his craft but has also established himself as the best stand-up comedian in the genre. Recently many of his fans have been eager to know about Carrot Top’s Girlfriend. All of his performances have a signature style of using extravagant props to such perfection that the audience breaks out laughing in splits in seconds. Top has been performing stand-up comedy since he was a child. That was his very first appearance on stage, back in his freshman year.

Despite the fact that his act was not well received by his peers, he did not give up hope and instead prepared himself carefully for his second outing. He quit his regular job to pursue a career in comedy almost immediately. He has appeared in a variety of talk shows and comedy series over the years, including “Larry the Cable Guy’s Christmas Spectacular,” “Criss Angel Mindfreak,” “Scrubs,” “Politically Incorrect,” “Reno 911!” and others. He has appeared in films such as ‘Chairman of the Board,’ ‘Weakest Link,’ ‘The Aristocrats,’ ‘Family Guy,’ and ‘The Hangover.’ Please continue reading to learn more interesting and intriguing facts about his life and profile. During his peak popularity, he would perform over 200 performances, all of which were sold out.

Carrot Top’s true name is Scott Thompson, and he is now dating Amanda Lorraine Hogan. In February 2012, Hogan was stationed in Las Vegas, where she owned a catering and event organizing company. On Instagram, she uses the handle Anythyme Catering to promote her catering business. The account was once again a personal page based on her uploads; however, she has dedicated herself to displaying her grazing boards since 2019.

Because they don’t regularly share images of one other on social media, the pair keeps their relationship pretty discreet. That’s presumably why Thompson’s commitment went unnoticed by the public. Unfortunately, neither of them had revealed anything about their initial encounter or when they began dating. However, based on their initial post with each other, we believe their relationship began in 2015.

On occasion, the couple flaunts their affection on social media. However, we have the impression that they prefer to keep matters private. This limited glimpse into their personal lives hasn’t gone over well with their admirers. Carrot’s admirers are also waiting to see if they have tied the knot and married or not. Carrot appears to be quite connected to Amanda’s family on Instagram, which is a positive sign. He also has a unique relationship with Amanda’s niece, Taylor. Top and Taylor, as well as Amanda’s and her sister’s families, frequently post lovely caught moments on Instagram. As of today, Carrot and his companion may or may not be married. Their relationship, though, is undeniably strong and has been for nearly six years.

How Did Carrot Top Become So Popular?

To set himself apart from his equivalents and other stand-up comedians, he began using props in his act. He even utilized his red curly hair as a prop to create a sense of humor. Shoes with training wheels, airline peanut bags with images of missing luggage, and paper cups and string telephones are among his other props. In 1992, his burgeoning fame and reputation earned him a guest appearance on ‘The Tonight Show with Jay Leno.’

The show not only introduced him to a wider audience but also helped him develop a larger fan base for his humorous abilities. After the passing of iconic comic Sam Kinison in 1992, he quickly stepped into his shoes. Carrot has been in a variety of shows over the years, including ‘Larry the Cable Guy’s Christmas Spectacular,’ ‘Gene Simmons Family Jewels,’ ‘Space Ghost Coast to Coast,’ ‘Criss Angel Mindfreak,’ ‘Scrubs,’ ‘George Lopez,’ and ‘Tugger: The Jeep 4×4 Who Wanted to Fly,’ among others.

Scott Thompson, better known as Carrot Top, was born in Cocoa Beach, Florida, to Larry Thompson. His father was a former NASA rocket scientist who worked on major missions such as Gemini and Apollo. Thompson had his elementary education at Cocoa High School, after which he attended Florida Atlantic University in Boca Raton. Carrot first experienced what it was like to be on stage during his freshman year of college.

Despite the fact that his stand-up show with Josh Abelson started off badly with stale jokes that elicited little laughter, the failure of the act did not disappoint him. He returned to the stage the next semester with self-written material on college life. His written work, interestingly, tickled the funny bone of every audience member, making his stand-up show a huge success. He earned a marketing degree from Florida Atlantic University and began working as a bank courier right away. Top did not, however, abandon his humorous skill and continued to perform on small venues. He quit his nine-to-five job to pursue his comedic career in 1990.