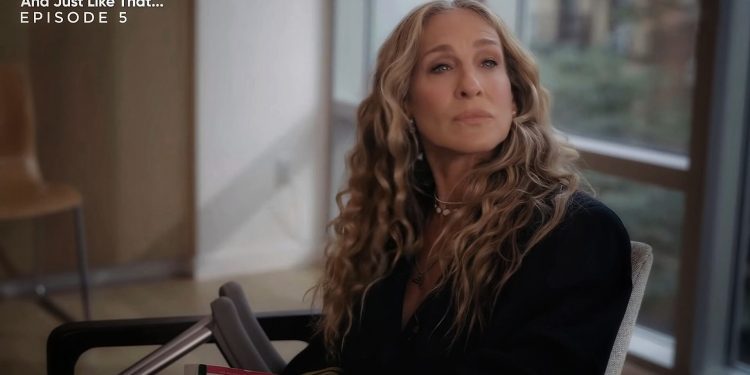 “And Just Like That” Episode 5 drops this Thursday and is set to focus on Carrie’s new hip surgery. She has gone through the surgery and now has a hard time doing everyday tasks. However, her friends are there for her and give her the support she needs. Charlotte will be contending with surprising news related to her daughter. Meanwhile, Miranda will contend with a problem of her own. She has been smoking and drinking quite liberally now, especially after meeting Che. Her friendship with Che has now bloomed into something that appears more than just a friendship. There are definitely some flames there and it’ll be interesting to see where this thing goes.

The next episode, according to the official synopsis, seems to have more scenes involving Che and Miranda. The two have been hitting it off rather well and the growing bond has given birth to many speculations. Will this friendship turn into something more intimate? This is the question the fans have been mulling over for a while now. Well, only time will tell where this storyline heads off to. In the meantime, let’s delve into all that episode 5 of “And Just Like That” will entail. Spoilers ahead!

Episode 5 of “And Just Like That” will release on December 30, 2021. The official synopsis reveals what “Tragical Hip” will entail. The title of the episode hints at the aging Carrie. In the promo, she doesn’t really think of herself as an old-timer just yet. However, Charlotte points out to her that she’s literally having hip surgery. And that would be the focus of Carrie’s storyline in the coming episode. However, supporting her through her surgery are her besties Charlotte and Miranda.

We see Carrie highlighting this fact in her podcast. Later on in the promo, we see Carrie’s young and hot physical therapist, Travis. It seems they might hit it off, and Carrie might move on from her grief a bit more. Meanwhile, the episode will also be following Charlotte as she gains big news about her daughter. We have seen in a previous episode how her daughter doesn’t feel like a girl sometimes. The upcoming episode may explore Rose’s gender ambiguity even more. On the other hand, Miranda will receive a book from Charlotte on how to quit drinking. Miranda will also share some more time with Che. The two seem to be romantically involved d and we may see Miranda coming out as bi in near future.

Watch ‘And Just Like That’ Episode 5 Online — Streaming Details

Episode 4 of “And Just Like That” will premiere on HBO Max on December 30, at 3:00 a.m. ET. New episodes of the show air every week on Thursdays at the scheduled time slot. You can watch “And Just Like That” online on HBO Max and other platforms affiliated with the streamer such as Hulu with the HBO add-on. If you happen to have a cable subscription, you can also stream the show online on HBO’s official website or HBO Max without an extra subscription. All you need to start binging is to enter your cable login details.

Episode 4 sees Carrie, who’s still trying to contend with her grief, deciding to sell her apartment. The Fifth Avenue apartment that she lived with her husband in, has bow become a morose reminder of Mr. Big. Everywhere in the apartment, lie his belongings and things that remind her of him. These transients make it even more difficult for Carrie to deal with his passing. She sees him everywhere and that’s why she has now started to sleep in her old apartment. We saw her walk past her apartment on Fifth Avenue and go to her old one in the last episode.

The reason for that was the spiritual residue that Big has left after his death. For Carrie to properly make peace and move on, she decides she needs to sell the apartment off. Later on, she shares her decision to sell it with her friends. Charlotte and Miranda are shocked, but Carrie tells them the reason why she’s doing it. To complete the sale, she hires a real estate agent, Seema Patel. Seema is a strong, to-the-point, and independent woman and it seems she’s here to stay. Her addition to the cast seems just right since there are several similarities she shares with Carrie.

Meanwhile, Charlotte is eager to grow her friendship with Lisa. Charlotte tells Harry she and Lisa are only mom friends for now. However, she now wants to be more than “just mom friends”. Harry has a colonoscopy appointment but Charlotte cancels it when Lisa invites them for her her husband Herbert’s birthday. Charlotte is excited but more than that, worried, about the upcoming occasion. She doesn’t have much diversity in the friend circle. Well, not at all, until this series — a fact that the makers finally realized. Anyway, to make up for that diversity deficit, Charlotte
starts panicking over how to behave and conduct herself in the midst of people from other races.

She thinks there’s a different code of conduct for different races. This line of thinking comes to bite her and the viewers later on in the episode. Since she and Harry won’t have any reference or template for how to act, Charlotte tells him to read works from black authors. This way, they’ll have something to talk about. However, when the occasion finally arrives and they attend Lisa’s party, it’s a different case altogether. All of Lisa’s friends are black, except for Charlotte and Harry. This gives rise to several cringeworthy moments from Charlotte. However, later on, Charlotte does manage to leave her coerced efforts at socializing and starts acting her true self. When Lisa’s mother-in-law mocks her taste in art, Charlotte defends her. Later, Lisa thanks her for doing that.

Meanwhile, Miranda’s free-spirited new self is blooming. Her newfound freedom is now a tad bit apparent to others. Brady and Luisa quickly call her our on the weed aroma she’s been emanating. Her high sessions with Che have been really popping off. However, episode 4 focuses on her friendship with De. Nye more. The two women have a deep and serious conversation about motherhood in the episode. Dr. Nye shares her reservations and fear about motherhood. Miranda tells her what it has been like for her, with notable honesty.

Stanford Departs from the Cast

The episode also gives a shocker revelation, to Carrie more than the audience. Stanford has left New York and went to Japan. He has left a letter for Carrie in which he apologizes to leave without informing her. We also learn that Stanford has also decided to divorce Anthony. This revelation comes as a shock to both the characters and the audience. However, we do know why his character has been sent off to Japan. It’s because Willie Garson — the actor playing Stanford — has passed in real life.