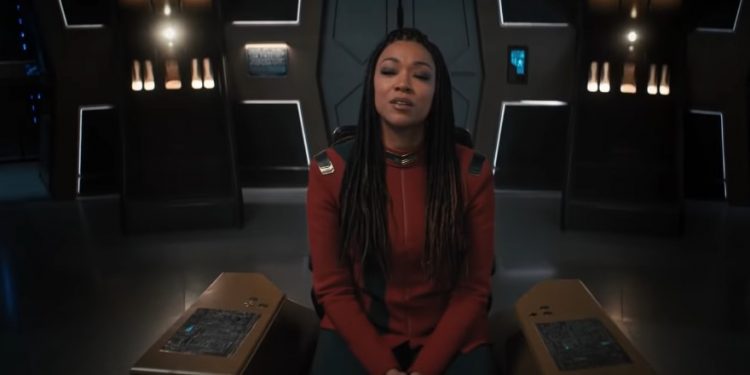 Things will get considerably more complicated in Star Trek: Discovery Season 4 Episode 4. Perhaps it was always going to be very difficult to reconcile Michael’s mission to find a renegade Qowat Milat – who murdered a Starfleet officer while smuggling dilithium – with Commander Stamets’ voyage to Ni’var to engage with the Vulcan-run Science Institute.

And that’s before you include in Book’s increasing sadness, Gray’s effort to transfer his mind to a mechanical body, and Tilly’s new self-improvement trip. However, the end effect is an episode that doesn’t stand out in any meaningful manner. Now without any further ado, let’s begin taking a look at Star Trek: Discovery here at Otakukart.

Star Trek: Discovery Season 4 Episode 4 will release on December 9, 2021, at 3:00 AM, Eastern Time, United States on Paramount+. To begin, the show drops weekly. Secondly, each episode has one-hour runtime. Thirdly, this episode’s script was penned by Bryan Fuller and Alex Kurtzman.

At the aforementioned time and date, ‘Star Trek: Discovery’ Season 4 Episode 4 is available to view on Paramount+ and the CBS All Access app. You may also view the program by buying the fourth season episodes on Amazon Prime Video. Previous seasons are available for on-demand viewing on iTunes, Vudu, and the Microsoft Store. The program is also available on DirecTV, Xfinity, and Fubo TV. Star Trek: Discovery is also accessible on YouTube TV as a video-on-demand service.

While the United Federation and Starfleet are still rebuilding following the cataclysmic event known as the Burn. The resurrected organization is threatened by a tremendous gravitational anomaly that defies all known science and analysis used by the crew of the USS Discovery. While the abnormality has already claimed friendly civilizations in its inexorable jaws. Starfleet is dealing with a particular dilemma as its supplies of dilithium to its restored friends are being targeted by particularly vicious people.

A trio of hooded persons boards the USS Credence as it comes to deliver a supply of dilithium to civilization as they’re reentering the United Federation. When one of the Starfleet officers refuses to stand down and chooses to live rather than die fighting. He is viciously stabbed before the thieves depart with the dilithium. After reviewing the surveillance footage of the incident with Michael Burnham. Later on, Federation President Rillak, and Ni’Var President T’Rina, Admiral Vance, observes that this is the fourth time such dilithium heist since the Federation began actively rebuilding itself and the first to result in the murder of a Starfleet officer.

Vance identifies the main suspect as a resident of Ni’Var, the reunified and renamed Vulcan-Romulan homeworld, commanding a mercenary squad. Starfleet anticipated the crime by implanting a tracker in the dilithium, which furnished them with the criminals’ supposed whereabouts. With Ni’Var being such a vital ally and possible full member of the Federation once again. This delicate situation leads to the involvement of the Romulan warrior nuns, the Qowat Milat, led by Burnham’s mother Gabrielle since the thief was a former sister.

Gabrielle and T’Rina promise to apprehend the perpetrators, with Rillak suggesting that they make the job a joint expedition with the crew of the Discovery as a show of goodwill. And since Starfleet has a vested interest. Rillak privately advises Burnham that, although Ni’Var’s open membership into the Federation is critical in dealing with the anomaly owing to their excellent scientific minds. The perpetrators must also be taken into Starfleet custody, a condition to which Burnham gladly agrees.

A wormhole to complicate the plot

After reviewing the anomaly’s data with Burnham, Paul Stamets theorizes it is a primordial wormhole owing to its cosmic features. And, more precisely, labels it a dark matter anomaly based on this research. But finds its behavior utterly unexpected. Stamets delivers this information to the Ni’Var Science Academy. But the scientists are skeptical. And T’Rina suggests she mind-meld with Book to learn more about the abnormality.

Book agrees, but this essentially forces him to relive the memories of Kwejian’s demise and offers no new knowledge. Back aboard the Discovery, a Trill Guardian instructs Adira and Gray to disconnect from their Tal symbiont link so that Gray’s mind may occupy the synthetic body Doctor Hugh Culber has constructed for him. But the operation is not without consequences. Fortunately, it all works out in the end.

Saru suggests Sylvia Tilly accompany Burnham on the expedition with the Qowat Milat because of Tilly’s warm presence and Tilly’s desire for some personal supervision. To which Burnham and Tilly enthusiastically accept. Unfortunately, the detachment is ambushed as it approaches the thieves’ base on a desolate moon in a second, more miniature spaceship. And Gabrielle’s Romulan sister is slain by many thieves boarding the ship.

Beaming down on their leader, the landing party discovers the moon to be home to a seemingly dead civilization. And the thieves utilize the dilithium to power the moon as a mobile planetoid traveling through space before realizing the entombed aliens are in cryostasis on their way to a new home. Later on, the thief ambushes the landing party and holds Gabrielle at swordpoint. Stating that she took the dilithium to keep this species alive. But had to keep their presence a secret since their pods are packed with expensive latinum attracting tomb robbers and placing them on her radar.

While Tilly is repairing the moon’s engine, Burnham investigates how to improve the cryostasis system as the species awakens to settle on the new homeworld they set out for a long time ago. Finally, with the species assured a fresh shot at life. The warrior nun surrenders to Starfleet before being remanded to Ni’Var custody. A decision that irritates Burnham, who wants more punitive justice. But one she accepts when she reunites with a healing Book back aboard the Discovery.

A few things to review this season

The Qowat Milat scenario also nicely ties in with the season’s wider themes of compromises and tough decisions that Michael is forced to make as captain. In “Anomaly,” she had to put someone she cared about in jeopardy for the greater good. This week, she had to swallow some of her more idealistic beliefs about what justice should seem like for the sake of political practicality. The issue of whether renegade Qowat Milat member J’Vini will be adequately punished for her crimes remains unanswered, especially considering how seriously the Romulan organization views the concept of lost causes.

Gabrielle is correct on many levels, and context does important. But Michael is as well — J’Vini did kill numerous innocent people. And even if she did it for the sake of saving an alien race from extinction, murder is still murder. Though “Choose to Live” is explicit about this divide and the confusion it creates, the fact that it concludes with Gabrielle’s gang effectively making a vague promise that J’Vini would suffer penalties before just disappearing seems like very handy escape.

Discovery also doesn’t devote enough time to Michael’s relationship with her mother to make this side quest worthwhile. The scene with Tilly is the closest to a meaningful moment. In which she lists off all the reasons her mother was a horrible parent who didn’t even like children. But that doesn’t mean she wouldn’t hug the snot out of her if she had another opportunity. Because they’ve been given such a remarkable second opportunity. It’s clear that this is supposed to drive the Burnham ladies to resolve their squabbles. But, in this episode, Gabrielle has a more meaningful interaction with Tilly than she does with her own kid.

This season, it’s uncertain where Tilly’s path will take her. It seems improbable that she’ll suddenly decide that a career in Starfleet isn’t for her, particularly because she’s so inextricably linked to the only other individuals who understand her confusing views about their time travel. But, after going through so much since her arrival in the 32nd century. It seems logical that she would want to reconsider where she is, both professionally and emotionally. But we’ll have to wait and see what happens next for her.