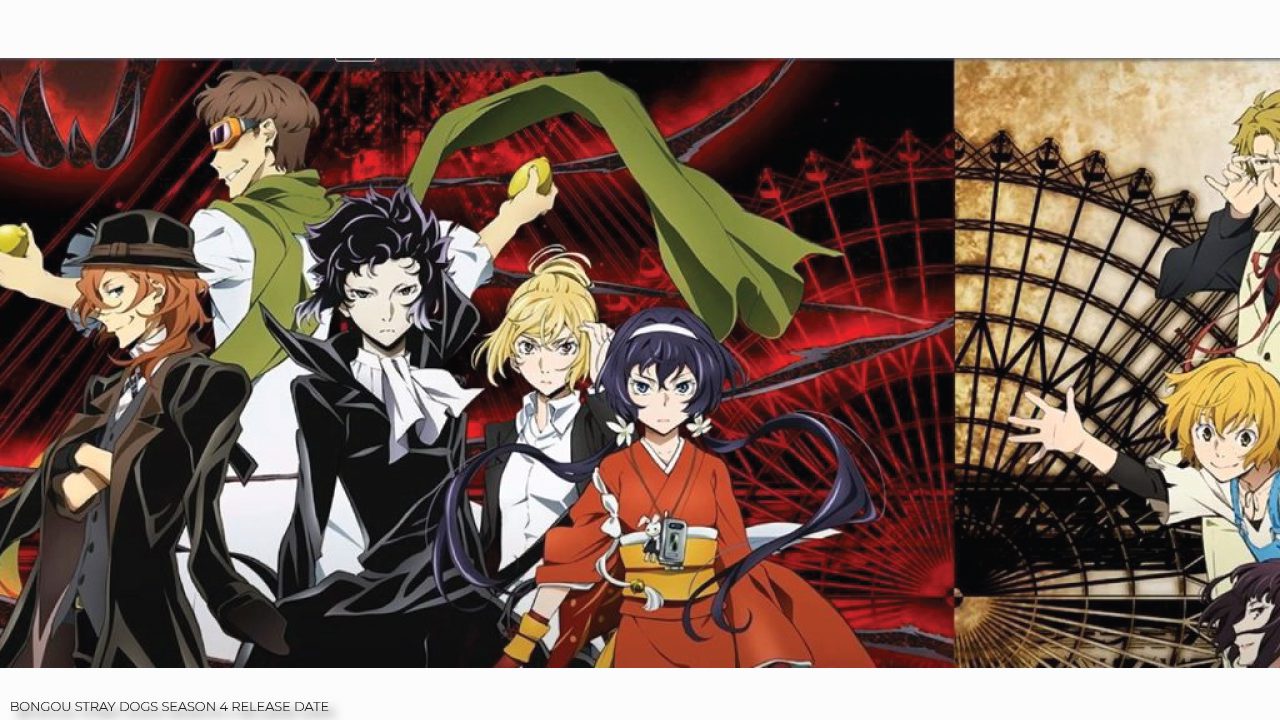 What is the release date of the popular Japanese anime series Bungou Stray Dogs Season 4? Firstly, Bungou Stray Dogs is one of Japan’s and the world’s most popular anime series. Kafka Asagiri created the manga, while Sango Harukawa created the illustrations. The anime was published in Kadokawa Shoten’s seinen manga magazine Young AceYoung in 2012. The manga’s roots may be traced back to the writer’s concept, in which he wanted to recreate the characters of dead artists as young adults and adolescents with magical powers.

The first season premiered in June 2016, and the second season premiered in October of the same year, much to the pleasure of fans. Following the release of the third season, fans are looking forward to the next season. However, no official notice has yet been issued. Subsequent episodes, however, have hinted at the coming of its fourth chapter. Season 4 of Bungou Stray Dogs has a release date which we will cover further down in this article. Now jump with us as we take you through our scoop of this popular anime series here at Otakukart!

Bungou Stray Dogs Season 4 will release sometime in 2022. Nothing official yet. Still, as soon as the production company comes up with an exact date, we will post an update for you. According to speculations, Season 4 will premiere in 2022. We may possibly hear some positive news by late 2021. Bungou Stray Dogs seasons 1-3 are now available to watch on Crunchyroll and Funimation. We’re hoping to binge-watch Season 4 on the same platforms shortly.

The third season’s cliffhanger indicates that the creators are not through with the narrative arc of Bungou Stray Dogs. The manga series consists of 20 volumes, and the third season adapts the thirteenth volume, ending the narrative on chapter 53. The fourth season has not yet been announced. However, given past seasons’ comparatively quick production pace, the production phase is unlikely to last long. Season two was released later that year, after the release of season one in 2016.

Season three, on the other hand, debuted in 2019 after a three-year hiatus. Moreover, it is almost likely that the series will return for the following part. The anime series is directed by Takuya Igarashi. In addition to the anime series, an Original Video Animation (OVA) titled ‘Bungou Stray Dogs: Hitori Ayumu’ was released in 2017. In addition, in March 2018, the film ‘Bungou Stray Dogs: Dead Apple’ was released.

The popularity of Bungou Stray Dogs has only increased since its debut, whether as a manga or an anime series, so a new season is definitely on the way. Simply put, there is no meaningful information on the topic. What, however, will be addressed in Season 4? Season 3 came to a close with Chapter 53 of Volume 13 of the original manga series. The original content seems to be approaching completion, although it is still being created. Many people think that this will be the last season of the show. Season 3 included a flood of new characters, among them Fyodor Dostoevsky.

Aside from the pandemic, another explanation for the delay may be because the authors are waiting for the manga series to conclude before completing certain arcs. Each season had twelve episodes. We could safely expect the same amount of episodes packed with action, comedy, and possibly romance starring our favorite detectives, as well as the battle promised by Atsushi. The odds aren’t bleak, but they’re undoubtedly high.

Kensho Ono as the villainous Ryunosuke Akutagawa, Yoshimasa Hosoya as detective Doppo Kunikida, Hiroshi Kamiya as detective Ranpo Edogawa, Yu Shimamura as detective Akiko Yosano, Toshiyuki Toyonaga as detective Junichiro Tanizaki, and Kisho Taniyama as mobster Chuya Nakahara round out the voice cast of “Bungo Stra. Without confirmation, it’s difficult to know who will return to reprise their roles in “Bungo Stray Dogs” Season 4. However, having said that, considering their importance to the series’ continuing narrative, most, if not all, of the leading voice actors may be anticipated to return if the show is renewed.