BTS SOWOOZOO: Everything to know About the 2021 Muster Event

After dropping thier new single, “Butter,” BTS announced another surprise for the fans. Well, Army (Fandom name) was already ready for the Muster, and they were already excited after the announcement BTS made a couple of weeks ago. However, the septet has released a whole new post to announce their upcoming online stream event. This year’s muster is called BTS SOWOOZOO. And after hearing the name of it, the Armys are definitely excited. BTS hosts muster every year to celebrate their debut anniversary with their fans. But, since the past years, they have been organizing online events because of the pandemic. However, they do their best to make the event as enjoyable as they can for the Armys.

The online live streaming event, BTS SOWOOZOO, will be held to celebrate BTS’s 8th anniversary. It will be a two-day event to celebrate BTS and Army. A complete schedule is out for the Muster 2021. and the Armys have already cleared their June Schedule. So, make sure to check out the dates and schedule down below.

BTS is a South Korean Kpop Boyband. Consisting of seven members, the pop stars debuted in 2013. After many hurdles, allegations, and hate, the boys proved themselves. And now they are called the biggest boy bands in the world. They woe most of their success to their fans. And it is no surprise that the love between Army and BTS is unconditional.

The two-day event will begin on June 13. As the event is going to be entirely live, we can expect a “live” session between Armys and BTS. As for the second day (June 14), BTS has arranged a  ‘World Tour Version.” This event will feature the group’s foreign language songs. The boys released a video to announce all the details regarding the Muster 2021. 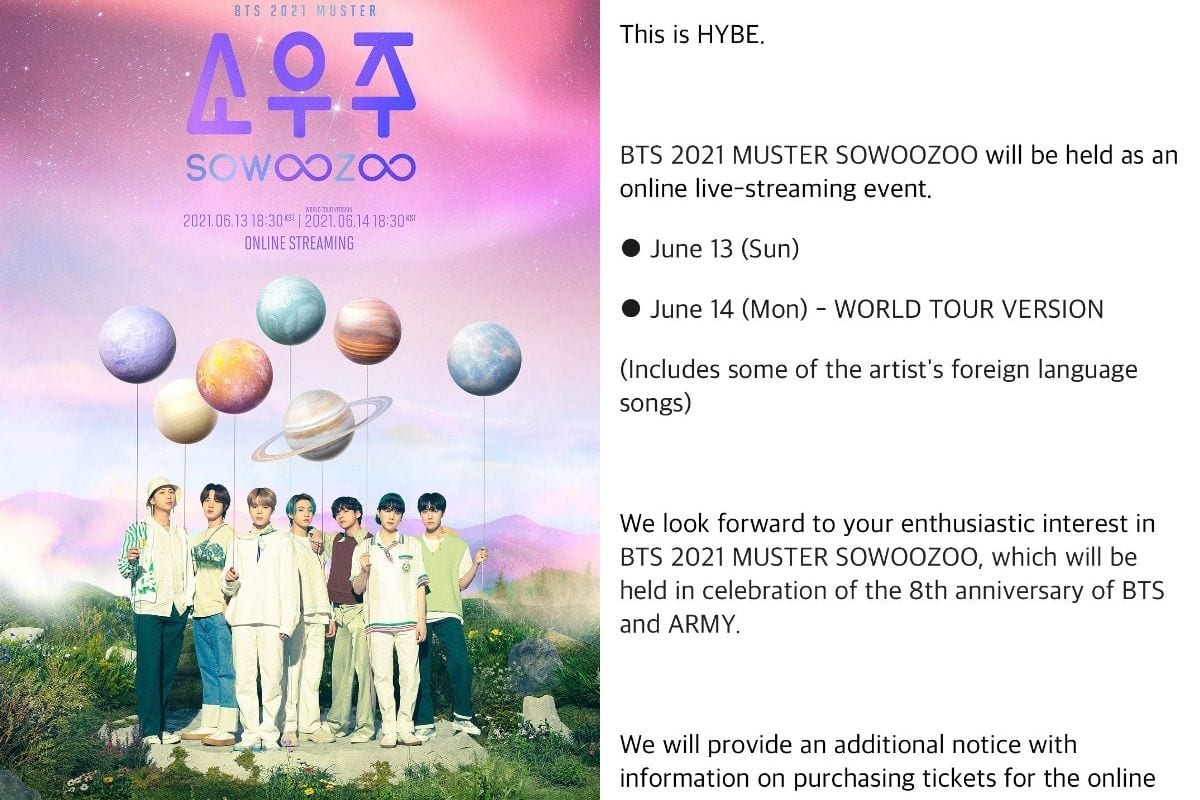 The video opened with RM (Namjoon) announcing the news in a “hilarious” tone. He was followed by the other members, who described the other details of the events. The eldest of the group, Jin, also mentioned that they are preparing hard, and he wants the Armys to look forward to it.

More details on the ticketing, how to watch, event timing, and streaming will be announced soon. Apart from the video, BTS also released a cover for BTS SOWOOZOO. The poster featured all seven members, with each of them holding a string connected to the planets of the solar system to make it look like balloons.

Last year, the boys recreated thier first debut anniversary. They recorded a video and had a huge dinner party. The Armys expect this year to be more enjoyable. You can watch thier announcement video down below.

The Armys are definitely excited to attend the online event. However, since the pandemic made us be on house arrest, BTS has managed to organize online events to interact with Armys. The Kpop superstars have also hosted two online concerts, which were massive hits for a virtual event.

BTS is currently packed with interviews and practicing for thier upcoming performances. On May 21, the boys released thier second English single, Butter. And, it made history the day it came out. Butter is now the first song with the most videos earned in a single day on Youtube. The Butter MV garnered 113 million views in 24 hours.

Moreover, Butter recorder the biggest Song Debut in the history of Spotify. But, this is just a start. Butter has got quite some time to break more records. You can also see the boys performing the show live on the Billboard Music Awards. BTS is also nominated in four categories at the music event.

The boys have a huge schedule lined up before they appear for the BTS Muster 2021. They will be next seen performing at the Good Morning America concert series. Also, they will perform at the Stephen Colbert Show. And as for appearances, the 21-century pop stars will be attending the highly anticipated ‘Friends reunion‘ happening on May 27.
BTS To Perform at GMA 2021 Summer Concert Series, Stephen Colbert Show, and More

So, it is okay to say that both BTS and Armys are packed for the next few days. So, make sure to keep reading to get further details.

Preview: So I Married An Anti-Fan Episode 9

Preview: So I Married An Anti-Fan Episode 9