BTS might be renowned across the globe for being one of the most talented and successful K-pop boy groups of all time however, not many people know about their families. While the members rarely talk about their parents or siblings, probably protecting their privacy, quite a handful of information has been revealed over the years about their star siblings. And trust us, you will be amazed to know how much some of the BTS’ siblings are skilled in their fields! All of BTS members have siblings who are leading successful lives. Must be the result of good genes!

Well, we know how sibling relationship works in real life, and it’s no different for them as well. Despite the unending bickering and pulling each other’s legs whenever opportunity strikes, most of them are supportive and encouraging. If you wanna know about BTS’ siblings and their lives, here is everything we have gathered for you. Let’s get into the main part without wasting any time.

Although we know Jin as the ultimate Hyung of BTS, he is, in fact, the youngest member of his family. He and his elder brother, Kim Seok-Jung, seem to be quite close, judging from the fact that he was appointed as the master of ceremony at Kim Seok-Jung’s wedding. Furthermore, he readily supports Jin’s career as an idol, evident from the time when he had attended one of BTS’ concerts during Wings Tour with his girlfriend. Kim Seok-Jung and his wife is expecting a baby, which means Jin is going to be an uncle! A couple of weeks ago, Kim Seok-Jung had updated his insta username to KimButter_Daddy, hinting that they have already named their unborn child Butter. Not to mention, Jin is the one who came up with such a cool name. The baby must be proud to have such a cool uncle!

Jin and his brother come from a well-off family and together owns a Japanese restaurant in Seoul known as ‘Ossu Seiromushi’, which they had opened in 2018. Maybe you should think of visiting the restaurant if you ever get to go to South Korea. Don’t forget to buy yourself a lottery ticket if you get to see Worldwide Handsome Jin Oppa!

Suga too, has an elder brother named Min Geum-jae, who is four years older than him. He was introduced to the ARMYs back in 2017 through one of BTS’ group photos with him during their Wings Tour. Apart from this, not much information is known since Suga is the kind of person who likes to keep his family away from the spotlight and has rarely talked about them ever since he debuted. Moreover, he had once stated that he doesn’t talk with his brother much, which is justifiable since they have busy lifestyles.

One of the most memorable social media interactions that we got to see between the two brothers is the time when Min Geum-jae had shared a cute baby picture with Suga and their dog, Holly. And of course, the older ARMYs would know that Geum-jae was featured on one of Agust D’s tracks named ‘SKIT’! Suga’s mother runs a restaurant in South Korea and has a group photo of her sons with all the BTS members nailed on one of the walls.

Take a close look at her and tell us she doesn’t look like a K-pop idol herself! Jung Ji-woo is probably the most popular and known siblings of a K-pop idol who doesn’t belong to the Korean music industry. Her fame comes from her successful career as an internet personality. Not only does she have a whooping number of almost ten million followers on Instagram but also more than a million subscribers on her YouTube channel.

Moreover, Jung Jiwoo runs her fashion brand named AJ Look, the eyewear company Fun the Mental, and the online shopping website Mejiwoo. Even J-Hope has been open about promoting his sister’s business by wearing clothes from her brand, being the supportive brother that he is! Recently, the news surfed that Cube Entertainment has signed an exclusive contract with her, which is a big milestone for her career.

The leader of BTS, RM, is mostly considered as a responsible and mature person which naturally proves the point of him being a protective elder brother to his younger sister. He has been careful enough to give his sister a life away from the camera and the media and thus hasn’t introduced her to the public yet. His sister, Kim Kyung Min, who is a 97-liner like Jungkook, is said to have been born on the same day as the debut of the group! On one of the occasions, RM was asked if he would introduce her to any of the BTS members, to which he replied with Jimin’s name.

Although the ARMYs appreciate how much RM cares about his sister and the close sibling relationship that they have, they would love it if he would ever feel like talking about her. Here is the only known picture that we have of Kim Kyung Min with her brother, and we can see how adorable she is from this, just like RM himself!

Indeed, Jungkook is amazingly talented, and so is his older brother, Jeon Jung-hyun! Well, he sure isn’t into singing like JK but is known for his artistic genes, evident from the exceptional digital drawings, animations, and fan arts posted on his social media. In fact, he might be a hardcore ARMY himself, considering his BTS fan arts on Instagram, including the one when the group topped the Billboard music charts! Although he had deactivated his social media accounts for an unknown reason, going down the memory lane, we can assure you that most of his posts were art-related and that he had never posted a selfie. So, we don’t know how he looks yet.

The brothers have an age gap of just two years, and judging from Jungkook’s nature, he must be very close to his elder brother. If we trust the rumors, Jungkook had bought an apartment in Seoul for his brother in 2019. Moreover, he once demanded Jeon Jung-hyun to draw pictures for BTS’ Jin, and he fulfilled it by sending it to him through chat. However, it seems like drawing is just a hobby for him since recently, it was revealed that Jung-Hyun has opened a company of his own named ‘Six6uys’ directed towards manufacturing clothing items and accessories.

One of the biggest misunderstandings of BTS’ fandom is considering Park Sungjin from Day6 as Jungkook’s older brother. Well, we can’t blame anyone for the two look extremely alike in some angles! However, they clearly aren’t related in any way. One day if he will reveal himself in front of the world, maybe then people will stop using Sungjin’s pictures in place of him.

We all know Jimin for his charismatic and angelic personality on and off the stage. However, he’s an equally lovable brother to his younger brother, Park Jihyun. They grew up together as nagging and bickering siblings owing to the two-year gap between the two, but now they have a close relationship. Whenever Jimin visits his hometown Busan, he makes sure to visit his brother. He was even featured in one of Jimin’s Busan Vlogs, where he asked Jihyun to jump. He happily waved and jumped, which made Jimin all flustered, saying that he’s very cute.

Taehyung, aka V has two younger siblings, a brother, and a sister. However, he has always been tight-lipped about them and has only revealed that he isn’t close to them. The reasons are disclosed, but they probably just drifted away with time since he was quite young when he left home for training. Well, that doesn’t mean V is deprived of siblings’ love. Gwenchhana Taehyung, you have your BTS Hyungs! 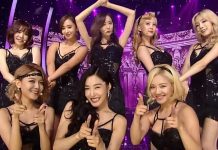 SNSD Comeback: Why Should We Be Excited About ‘Girls’ Generation’ Comeback?