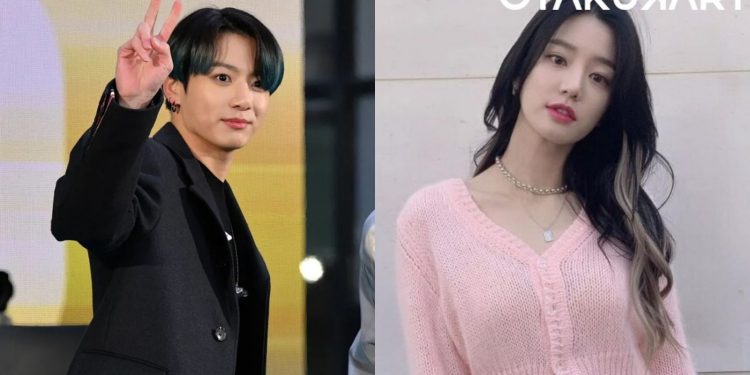 Recently dating rumors related to BTS star Jungkook and actress Lee Yoo Bi engulfed social media. However, the agencies of both celebrities have quickly denied the rumors. After a Youtube channel falsely shared that Jungkook and Lee Yoo Bi are dating, the fans started digging more about the two. Luckily, their confusion was cleared after official statements from BigHit Entertainment and Y-Bloom Entertainment.

A Youtuber, who runs a Kpop channel, published a video claiming that Jungkoon and Lee Yoo Bi were dating. They presented a couple of evidence to prove the news right. For instance, the channel pointed out the same outfits and matching bracelets owned by the two. Also, Jungkook fits the definition of Yoo Bi’s ideal type: “A Manly man with beautiful eyes.” Moreover, Yoo Bi was associated with “lovestagram,” She posted multiple purple hearts (indicating BTS’s official color).

Lastly, the channel pinpointed how Jugkook’s older brother and Yoo Bi’s younger sister follow each other on social media.

Y-Bloom shared that the information stands on groundless rumors and is entirely false. They wrote that the news of Jungkook and Yoo Bi dating makes no sense. Furthermore, they haven’t met each other and don’t even know about each other. Y-Bloom informed that among all BTS members, Yoo Bi only knew Suga, and they are unsure if the two are in touch any longer.

On the contrary, BigHit denied the rumors, and the agency will take legal action against all the false rumors and malicious comments related to BTS.

The fans took over the internet to discuss the news. However, some were shocked as they had no idea about Jungkook and Yoo Bi getting engaged in a dating rumor.

Lee Yoo Bi is a South Korean actress who recently appeared in Yumi’s Cells. Meanwhile, Jungkook is a Kpop idol and member of the Kpop sensation group, BTS.

Also Read: BTS Suga Tests Positive For COVID-19 After Returning From US