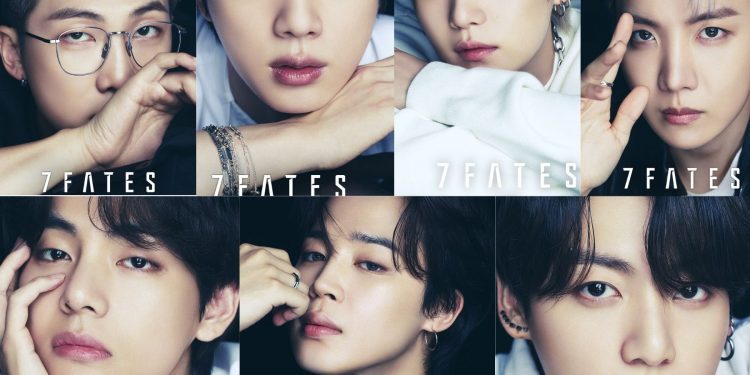 BTS might be on a break, but BTS ARMY is again on its way to becoming the busiest fandom. The seven-member Kpop boy group has initiated another fascinating project, intriguing the entire fandom. BTS or Bangtan Sonyeondan is currently on their second hiatus. However, after the news of their upcoming album and Seoul Tour, BTS has shared a dramatic teaser for their upcoming webtoon, 7 Fates: CHAKHO. It is a collaboration between HYBE and Naver Corporation. Also, BTS’s 7 Fates: CHAKHO is releasing next month. Hence, here is all you need to know about the new BTS web novel.

The official account for “7 Fates: CHAKHO” by HYBE has also shared a series of teaser images of the seven members. Besides getting lost in the beautiful features of the septet, each teaser photo comes with a special message. The “7 Fates: CHAKHO” web novel surrounding BTS members will undoubtedly depict another universe. Thus, social media is also filled with several theories surrounding it.

Luckily, HYBE and Naver Webtoon have shared a few details on the plot of the webtoon. Furthermore, the release date of 7 Fates: CHAKHO  is also announced. So, get ready to enter another BTS world with their strong Tiger-like personalities.

The brand new teaser for BTS’ “7 Fates: CHAKHO” opens with bold instrumental music, as we find the seven boys moving towards a shinning ball of light. The 15-second video ends with Jimin looking at the screen one last time. The shiny source of light seems to be their fate since all of them look at it with utter hope.

The new web novel is described as a fantasy story set in the Joseon Dynasty centering around the Tiger hunters called chakhogapsa. The story will be based in a city in the near future, sharing the lives of seven boys whose’s fates are intertwined with each other. Moreover, we will see the septet overcoming hardships to grow together.

The concept will transform the chains of concepts BTS has been associated with ever since its debut. The group regularly talks about “Love,” “Hope,” “and Hardships.” But, channeling stories of the Tiger Hunters from the Joseon Era will be a new experience.

7 Fates: CHAKHO will release on January 14, 2022. It will be released as a web novel on Wattpad and a Web comic on Naver Webtoon. So, mark the dates now.

The forthcoming original webtoon from HYBE and Naver Webtoon results from the companies’ long-time deal. Naver will also work on similar projects with other HYBE artists. They have already announced “The Star Seekers” for TXT and “Dark Moon” for Enhypen.

As mentioned above, HYBE has also posted individual teaser images of all the members of BTS. Each image comes with a specific tagline about Fate. It has stirred up more excitement among the fans. Social media is already a ‘discussion’ section for them to share the potential theory behind the upcoming web novel.

It’s hard for the ARMY to decipher the actual storyline. Thus, they are waiting for “7 Fates: CHAKHO” to come out soon. Apart from making stories in their head, BTS members are trending for their stunning visuals for “CHAKHO.” Check out all the teaser images here on HYBE’s official Twitter account for “7 Fates: CHAKHO.”

This is the second time Naver is collaborating with BTS. The two previously worked in 2019 on The Most Beautiful Moment in Life Pt.0: Save Me.’ The webtoon had 15 chapters comprising stories related to the seven BTS members and was set in the ‘BTS Universe.’

BTS, the global music phenomenon, has millions of fans. One of the reasons behind their success is their frequent communication and transaction with BTS Army. “7 Fates: CHAKHO” will most likely be another addition to their gift to the Army.