BTS makes history with becoming the only artist to sell out 4 concert shows at SoFi Stadium, LA. 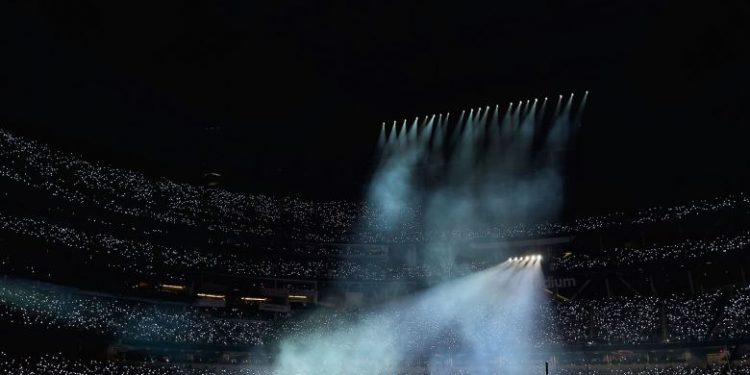 BTS is having another sweet taste of success with their new achievement. The South Korean Kpop boyband, BTS, is now the only musical artist in the world to sell 4 concert shows at SoFi Stadium, LA. BTS’s first Offline concert- PTD On Stage – is currently happening at the SoFi Stadium in two years. From November 27 to December 2, BTS has booked the entire stadium for four shows. Now, with two successful nights, BTS has earned the title of the only artist to sell 4 concerts at SoFi.

Situated in Inglewood, California, SoFi Stadium reopened in September 2020. During the regular events and concerts, SoFi has enough space to hold 100,000 people. However, due to one of the screens not working, it can give space to only 50,000 audiences right now. Therefore, BTS is interacting with 50,000 fans for their concerts at the SoFi stadium.

Christy Castillo Butcher, the Senior Vice President of Programming of SoFi Stadium, shared on November 29 that they are obliged that BTS’s first historic concert after two years is being held at SoFi Stadium. In addition to this, Butcher mentioned that BTS is the first act to sell out four-concert shows in the history of SoFi Stadium. The BTS PTD On Stage offline concert sold the most tickets among any other concert organized by a single band or artist.

The concert is also streaming live at the YoutubeTheatres, which has a capacity of 6,400 seats. Buther dropped the information and added that it is the first time the live concert and Youtube Theatre streaming is happening simultaneously. It will surely take up some time to add up these numbers.

But, you can get all the updates from BTS’ PTD Concert first day here. The following shows will take place on December 1 & 2. BTS recently earned three AMA trophies, including “Artist of the Year.” Furthermore, the septet earned their second Grammy Nomination in the category- “Best Pop/Duo.” The group consists of RM, Jin, Suga, J-Hope, Jimin, V, and Jungkook.