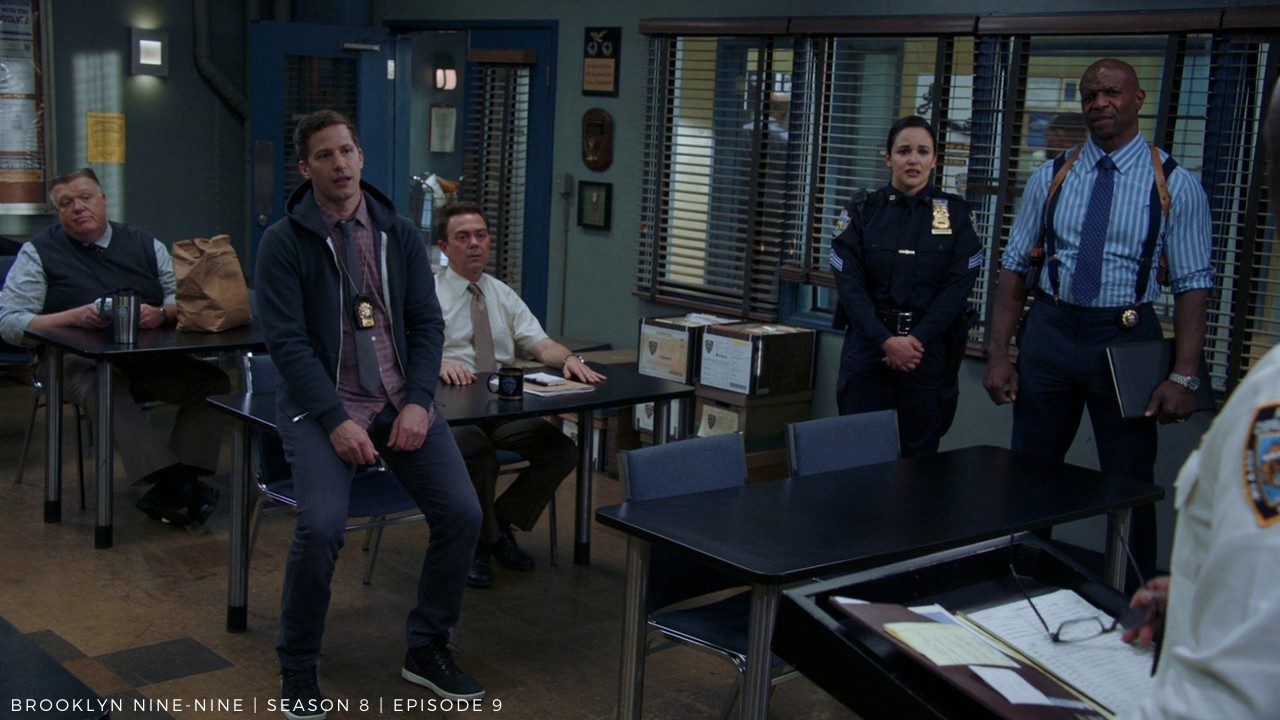 We saw it coming and although we weren’t exactly ready, here we are. Brooklyn Nine-Nine Season 8 will officially wrap up next week with Episodes 9 & 10. So, writing the same brings tears to our eyes and we are bound to see the same from the finale. The entire final season of the show was a constant reminder of the love the characters had for each other. More recently, the fall of Kevin and Holt’s relationship, the respect Amy has for Holt and the love Amy and Jake had for each other were prime examples of it.

We are expecting the same love of the past eight years to be given a second look before the characters bid us adieu. So here is what happened recently on the show. Boyle took Terry and Jake to the funeral of his good old Pappy Boyle. That was until Jake figured out there was a bigger mystery on the hand. Then we had the fall of Holt and Kevin’s relationship, only for them to reconcile but there were few problems that were needed to be addressed and that’s what the show did.

Previously on Brooklyn Nine-Nine Season 8,  so Jake and Terry joined Boyle for a trip to Pappy Boyle farm for Pappy’s own funeral. Terry noticed the giant rats first hand before meeting the Boyles. When Jake realizes Pappy died mysteriously, his will is missing and the property goes to a black sheep, as in cousin Lyndon Boyle. He smells something fishy although Boyles denies that a Boyle could kill another Boyle. Anyway, Jake decided to investigate it and found out that Pappy died of poisoning.

Investigating Lyndon resulted in finding out that he and Pappy did have a fight. But it was all for missing a zoom call. So he was angry when Pappy called him a disgrace. Then he tried to open the Grandmother Dough which determines a true Boyle but failed. He didn’t even go at the poison there but there is a hair on the box. The DNA results revealed that the hair came from Rodent but also the fact that Charles might not be one of the Boyles. 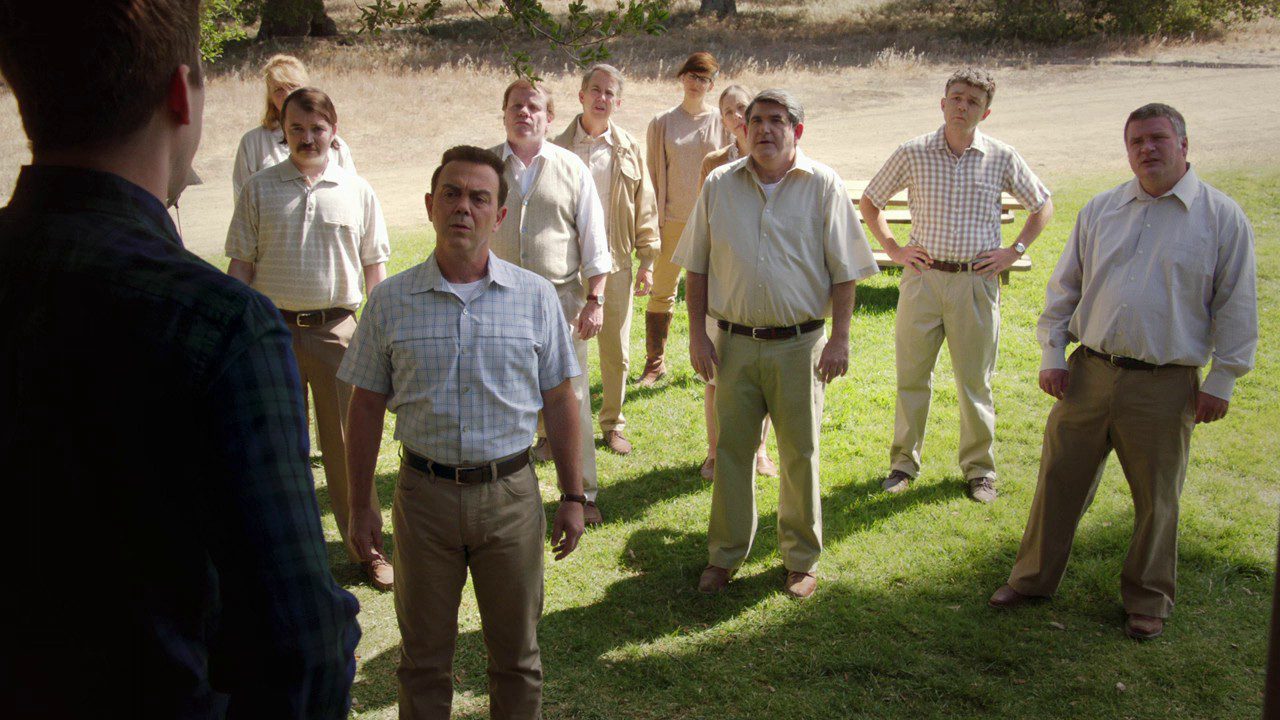 Further investigation suggests it was a rodent who is the reason behind Pappy dying.  Muffin ate the poison and Pappy accidentally drank Muffin’s milk. Apart from Pappy’s death, there was Sam Boyle who also planned much of this to prove Boyle was not an actual Boyle. But towards the end, Boyle proved himself that he is a true one by opening the Grandmother Dough which no one had did in years.

Apart from that, we also had Captain Holt struggling with couples therapy and is going further away from Kevin. Rosa and Amy assisted him and Rosa had an idea to have him date someone else. Rosa wanted to manipulate Holt into going out finding out that there is no one like Kevin. But towards the end, it was him trying to keep them away from meddling with their life. At the same time, Holt realized that he focused so much on winning in therapy, he lost Kevin. Until Kevin came running in rains and kissed Captain Holt to close the episode.

The eighth episode of Brooklyn Nine-Nine Season 8 opened up with Captain Holt announcing his retirement from police duty. While it shook everyone, Holt wanted to be there for Kevin after almost losing him. Anyway, there is a vow renewal ceremony organized for both and everyone is coming. Except for the fact that Amy should not know about Holt’s retirement until he tells her in person or else it will shock her.

If that wasn’t enough, Holt found out about O’Sullivan hacked into Nine-nine’s system and fudging the numbers of their reform proposal. Now the team was on the mission, Holt and Jake will infiltrate O’Sullivan’s house and retrieve his laptop. Meanwhile, Terry will distract O’Sullivan by sporting as an ex-roadie of Billy Joel. O’Sullivan is a die-hard of artist, Terry will sell him a concert artifact and take away his fingerprint to open his laptop. Amy will join and assist him. Lastly, Boyle, Scully, and Rosa will be distracting Kevin from knowing where Holt is. 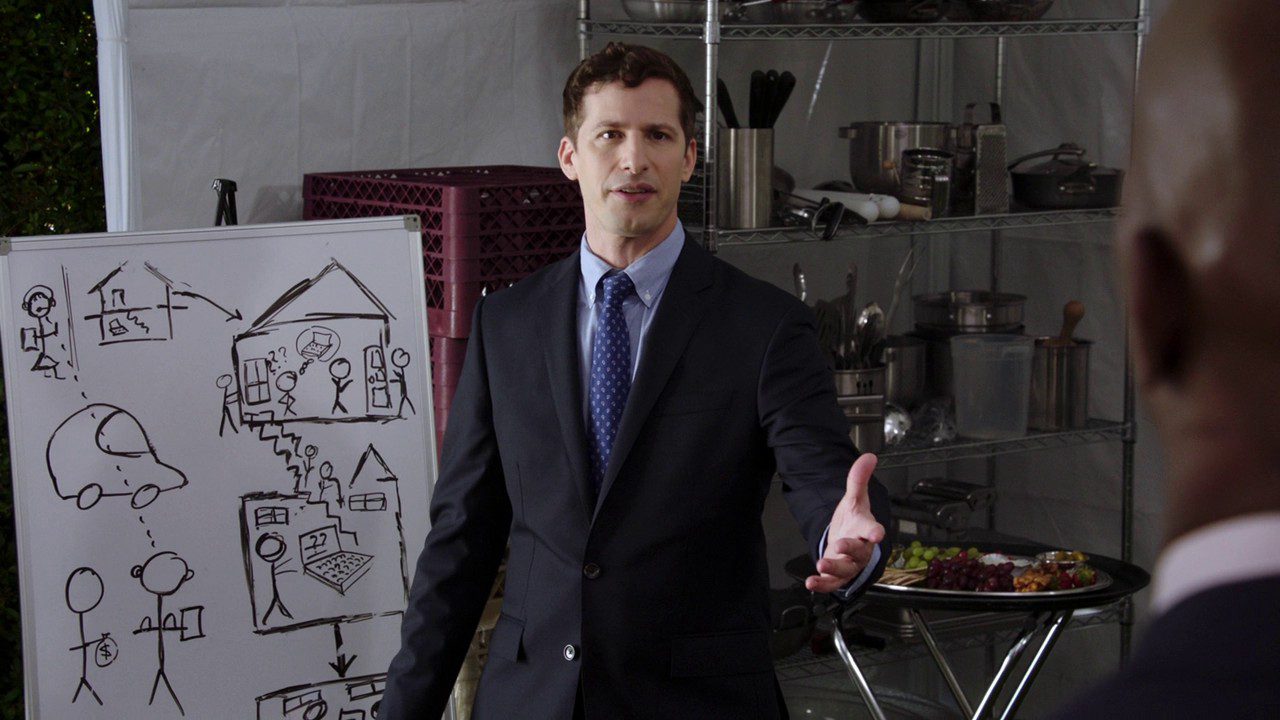 Jake and Holt manage to dress as people from Gas Company and get in the basement. But sooner or later O’Sullivan’s mother finds out they are lying and traps them there. At the same time, Terry accidentally reveals Amy about Holt’s retirement. This leads to a mishap in the mission but Terry ends up teaching both Amy and O’Sullivan a lesson.

Meanwhile, Rosa tries to distract Kevin using Cheddar. She underestimates dogs and as Boyle said, dogs can be vengeful. In turn, Cheddar messes up with the mission board and Kevin finds out about it. But instead of staying angry. Kevin and Rosa dressed up as cops come to Jake and Kevin’s rescue. The vow renewal ceremony goes well. The episode comes to a close with the acceptance of the Reform Proposal of Nine-Nine. Then Holt’s promotion to Deputy Commissioner Of Police Reform and Amy’s promotion as Chief.

Brooklyn Nine-Nine Season 8 Episodes 9 & 10 are both together titled, “The Last Day”. The official synopsis of the episode says we will see the squad rallying up and getting their stock together from the past eight years. They will reminisce the fun times and ups and downs they had together as they look ahead into the future. Better have your tissues ready.