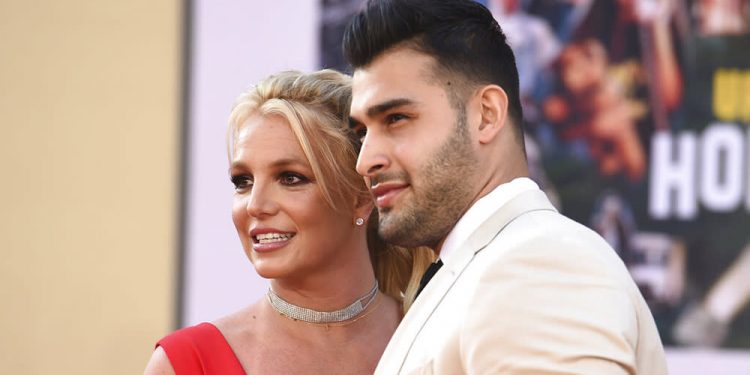 Fans must be wanting to know all about Britney Spears’ Fiancé. Singing sensation Britney Spears is enjoying her newfound freedom as she won the legal conservatorship battle! Not only that but she recently got engaged to her longtime boyfriend, Sam Asghari. The two have been dating for a while, and recently Asghari popped the question. Fans and celebs rejoiced when the big announcement was made! From working together on a music video to being engaged, the couple’s love story is straight out of a fairy tale! Not to forget, the couple works out together, and it only increases their bond.

The two are often seen posting funny yet mushy pictures and videos on social media while setting some major couple goals for many! However, Sam Asghari seems to maintain a low profile as far as his whereabouts are concerned. Let us know a bit more about Britney’s constant rock who has always supported his lioness! From supporting the entire #FreeBritney movement to calling out her father, Sam Asghari is the perfect fiancé who supports the singing star like no other!

Britney Spears’ Fiancé’: Here’s All About Him

Britney Spears’ Fiancé is Sam Asghari. Sam,  just like his ladylove,  is a fitness freak. He owns Asghari Fitness. The fitness center offers its members all kinds of personalized training programs and customized meal plans. Asghari is often also seen giving his followers updated on his Instagram with photos of himself as the face of the fitness brand. In an exclusive interview with Men’s Health, Asghari revealed that he used to play football and was also in the Police Academy.

Given how athletic Sam was, he further revealed that it was his sister who encouraged him to try modeling in the first place. His sister even took him to an audition once. The aspiring model bagged his first runway show in Palm Springs when he was just 21 years old! Fans must have seen Sam Asghari in the hit Fifth Harmony music video, Work From Home.

Where Did Sam Asghari And Britney Spears Meet?

Sam Asghari and Britney Spears had an extremely adorable meet-cute story of how they crossed paths for the first time. Sam Asghari got an opportunity to work in Spears’s music video for Slumber Party. As fate would have it, the two met, and Asghari admitted that Britney gave him butterflies when they met for the very first time. Here are a few snaps of the couple as they went on a trip to Maui.

Britney introduced herself, which was followed by a joke cracked by Asghari, which he admitted, was not a funny one! They two exchanged phone numbers, went out for a sushi date, and have been close-knit ever since. Sam Asghari has been in awe of his ladylove ever since and doesn’t stop gushing about it. He has gone on record to admit how the singing star not only motivates him to be a better person each day but also considers her a blessing in his life.

Sam Asghari recently took to social media to share a series of photos of himself with his lady love, Britney Spears. While declaring his admiration for her relentless strength, Asghari further said that every day is Britney’s birthday while calling her his wife. This has made fans speculate whether the two have tied the knot in an intimate wedding ceremony or not. The two got engaged in September, while many showed concern over the issue of Britney signing a pre-hip.

It has been revealed how happy the newly engaged couple is, and the pop star wants a new life with her beau and wants to make many changes. Britney Spears is excited to move on and close that chapter of her life. The insider further revealed that the pair want to live closer to the city and even planning to buy a new house. The Criminal hitmaker is all set to make a fresh start with her beau.