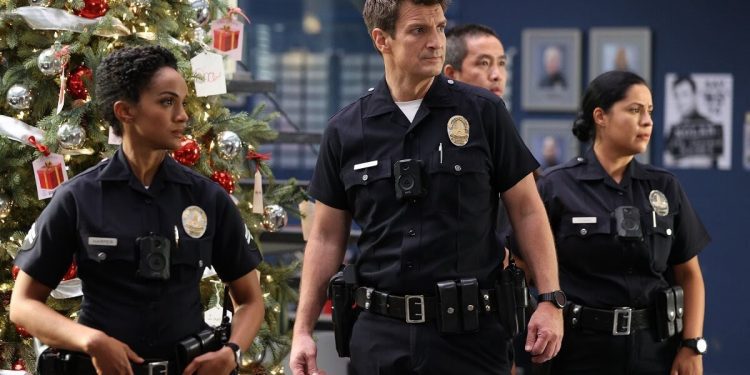 The Rookie airs weekly on ABC

“The Rookie” Season 4 Episode 9 will continue the stories that were the main focus in the last installment. Episode 8 dealt with Wesley’s deal with Elijah getting more and more troublesome for him. After initially refusing Angela’s help, Wesley did finally decided to become an informant. The next episode will see him carry out the covert new role that might entail major risks for him. Meanwhile, we’ll also be seeing Bradford and Gennifer learning about an unsettling truth about their dying father.

Chi-Yoon Chung has helmed the episode, with a teleplay from Alexi Hawley. Serving as the winter finale, episode 9 will guest star Peyton List as Gennifer Bradford. Other guest stars include Brent Huff, Zayne Emory, Enver Gjokaj, Brandon Jay, and Dylan Conrique. Let’s now delve into all that episode 9 of “The Rookie” season 4 will entail. Spoilers ahead!

“The Rookie” Season 4 Episode 9 is set to release on December 12, 2021, at 10 pm ET/PT. According to the official synopsis, the next episode will continue to see Wesley dealing with the mess his deal with Elijah has become. The last episode ended with Wes going to Gray, ready to become an informant. Episode 9 will see Wes starting to become desperate to get out of his situation. Acting on his desperation, he’ll try to plant a listening device in Elijah’s office and hopefully record something incriminating.

Meanwhile, we’ll also continue to see Bradford dealing with his troubled past with his problematic father. However, the synopsis suggests some bad news regarding his dying father. The next episode will likely see Bradford contending with his father’s death. Meanwhile, he’ll also have to take care of his sister Gennifer, who’s trying to sell their childhood home. We may see Bradford making some sort of peace with his relationship with his father and moving on from some repressed uncomfortable memories.

Episode 8 saw the team dealing with a case involving a possible mass casualty event when a sovereign citizen reaches his tipping point. Meanwhile, Tim deals with some of his past issues when his sister Gennifer arrives. At last, Lopez is also dealing with a lot in the episode, with her husband Wesley’s ongoing problem with the crime boss. The episode opens with Wesley coming clean about his deal with Elijah to Angela. She offers to help him but We’d refuse, saying he wants to fix things himself. This rubs Lopez the wrong way, raising her temper ruining her mood for the rest of the day. Her subsequent temper keeps making it difficult for her to focus on the job throughout the day.

Lopez and Nolan respond to an assault allegation. It concerns an IRS agent who claims that a man tried to assault him when he went to audit him. The two detectives learn a thing or two about the man who assaulted the IRS agent. His name is Marvin Reynolds and he’s one difficult nut to crack — he is a sovereign citizen. This means that he doesn’t believe in his American nationality, much less in paying his taxes.

Meanwhile, we learn some important things about Sergeant Bradford’s past. His sister Gennifer surprises him with a visit. She wants to talk about their dad but Bradford doesn’t want to. It’s clear that there is some rift between the two by the discomfort and hesitancy Bradford feels. He doesn’t want to talk about dad or the house that Gennifer wants to sell. However, she wants to renovate the house before selling it. Bradford has been ignoring her and doesn’t want any of it. We later learn where this reluctance is coming from.

While Bradford keeps avoiding the talk about his father, Gennifer presses on. She keeps bringing up the conversation again, roping even Chen into it as well. Bradford isn’t keen on renovating the house and says Gennifer is watching too much of those renovation TV shows.

Nolan and Lopez now have a lot on their hands that they didn’t anticipate. Marvin Reynolds is a real nutjob and his sovereignty has cranked to an eleven. Refusing to have anything to do with taxes or remaining calm, Reynolds makes a run for it and flees. Nolan and Lopez then search his home and discover that Reynolds holds way more dangerous tendencies than just a sovereign fervor. His house is replete with weapons so the team does a little background check on him.

They find out that Reynolds has been planning for a terroristic attack. The discovery results in a city-wide manhunt for Reynolds. Meanwhile, Lopez and Nolan learn more about Reynolds from his ex-girlfriend. She reveals that he wasn’t always this crazed anti-establishment and sovereign guy. He was a regular citizen once but it all changed after he met a guy by the name of Cooper online. It was Cooper who instilled this sovereign lifestyle in Reynolds.

Reynolds’ Case Comes to a Close

Nolan and Lopez visit Cooper and question him about Reynolds. He tries acting clueless about it until Lopez and Nolan tell him that he can be trialed along with Reynolds as well. When he realizes he’s in trouble, he also tries to make a run for it. However, unlike Reynolds, he can’t escape successfully and Lopez takes him down. We see how Lopez’s anger with her husband reflects on her job. She realizes it too when Nolan points it out. She apologizes while the search for Reynolds continues.

The police eventually find Reynolds inside a Navy ship museum. When they spot him, Reynolds opens fire and gets hit by the retaliatory fire. As a result, Reynolds dies, sticking to his sovereignty till his last breath. Meanwhile, Wesley finally makes the sensible choice and goes to Sergeant Gray, telling him he wants to become an informant.

We also learn what the actual reason behind Bradford’s hesitancy is. It’s because he doesn’t really want anything to do with his father. Although his father, as Gennifer reveals, is dying, Bradford still doesn’t want to talk about him. It’s because his father abused him in his childhood. The abusive childhood is why Bradford doesn’t want anything to do with the home either. He just wants it to be sold and be done away with. However, he later realizes that his sister would need help renovating the house. Bradford agrees to help her sister sell the house and asks Nolan for assisting too.

Episode 9 of “The Rookie” season 4 will air on ABC, where new episodes air every week on Sundays. You can watch the episodes online on ABC’s official website and Hulu. You can also watch the TV show via Live TV services like Fubo TV, DirecTV, YouTube TV, and Hulu+Live TV. VOD platforms like Amazon Prime Video, iTunes, and Google Play Store let you rent and purchase individual episodes.