The best selling novel of Nora Roberts is all set to make a huge comeback through Netflix. 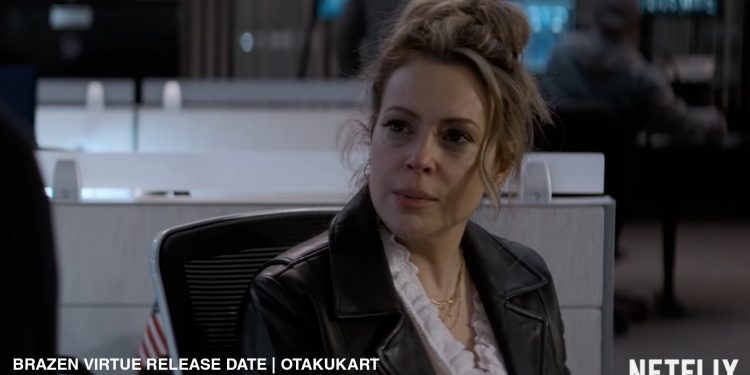 Brazen Virtue is all set to hit Netflix soon. All the fans are very excited to have this movie on the screen. Well, speaking about the release date of Brazen Virtue, it became one of the trending topics on the internet. Moreover, the film is going to be a romantic thriller genre. The film is adapted from the award-winning novel of Nora Roberts. And it is of the same name. To be more precise, this book came out in 1988, and because of its tremendous success, the author won the Golden Medallion Award in 1989. Moreover, it was selected under the Best Suspense category.

It seems like the filming for this movie began in early 2021 and wrapped up in this year itself. Moreover, the trailer just came out, and everybody is deeply engraved to connect all the dots of this thriller film. Well, most of them are well aware of the plotline. Many fans are desperately waiting to know the release date of Brazen Virtue. Just to make sure that the creators haven’t messed up the authenticity of this story. Moreover, there were several events when some of the cast members were revealed. Nora always wanted strong characters to portray the lead roles.

Brazen Virtue is all set to release on January 13, 2022. So fans, you all better gear up because the film will be available to watch on Netflix. The internet went crazy in the past few days since the creators came up with the trailer of this movie. Since then everybody has been excited to watch the film. Moreover, this thriller film is a Monika Mitchell directorial. Little did you know that according to her, the movie is as good as the novel. And it won’t disappoint anyone with the plotline. Netflix usually directs its focus on many popular novels like this.

Speaking of the movie, director Monika Mitchell has selected professional actors for the role. The lead actors in this movie are very well experienced, just like the way Nora Roberts wanted. Moreover, the fans of this novel will get to see the popular American actress Alyssa Milano. She’s pretty popular for her versatility as she represents herself as an author and a singer as well. However, she will be portraying the role of Grace. Moreover, the movie will be available at 12:00 a.m. PT and 3:00 a.m. ET. This movie will surely highlight a lot of popular things from the book.

On December 15, 2021, Netflix launched the official trailer for Brazen. And since then, fans have been sorting out the possible chances of this movie’s success. Moreover, the trailer was amazing. Speaking of the trailer, the creators highlight multiple key points. The trailer starts with the life of the popular mystery author Grace. One day suddenly, she discovers the corpse of her sister Kathleen on the floor. After she heads home to meet her, soon, multiple things begin to unravel. The scene jumps off to another lead character from the film that is Detective Ed. This role is portrayed by the popular American actor Sam Page.

Since it’s her sister’s case, they question her about her lifestyle. Upon which it is revealed that Grace’s sister has been living a double life. In one, she was a popular and respectable teacher. Wherein in the other half of her life, she was a performer. Well, her secret life led her to die. Grace realizes that her sister connects to different clients through webcam and this, in turn, made the other half of her personality pretty famous. Grace decides to get herself involved in this case since it’s a personal matter. Soon they realize, that they are looking for a psychopathic serial killer.

When it comes to the plot of this story, it is very complex and confusing. Grace is a very popular author who has expertise in writing mystery and thriller novels. Little did she know that she would be stuck in such a case in reality. She had to deal with a serial killer from Kathleen’s life. This would be extremely dangerous for her. Moreover, The detective appointed to this case gave her a fair warning to stay away from the case as well. And it seems like Grace is going to be dragged into something that she writes herself. Maybe she will consider Ed’s warning as this case isn’t fictional. With her sister gone, things are pretty much difficult for Grace. So how exactly is she planning to deal with this?