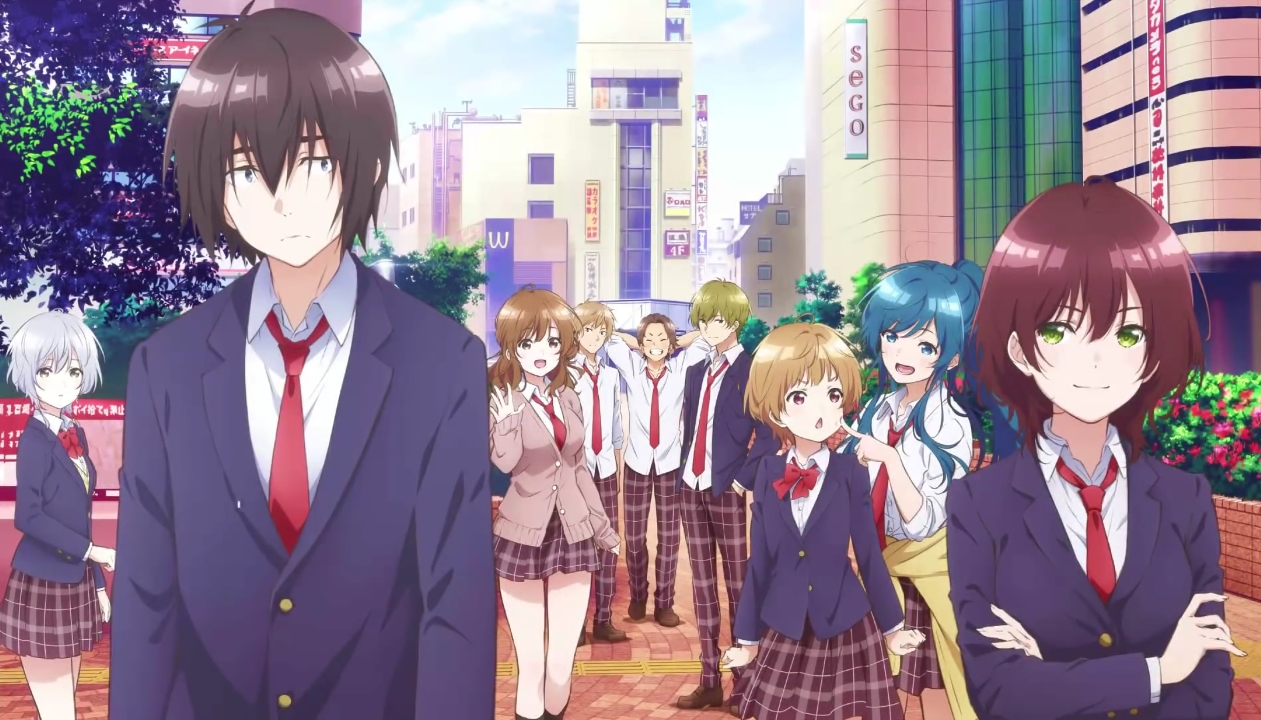 Bottom Tier Character Tomozaki Kun started airing on January 8, 2021. On 26 March, the anime released its 12th and final episode that has left a satisfying impression on anime fans all around. The anime was an adaptation of the ongoing light novel series by Yūki Yaku. This anime brings forth the life of two gamers, one who is a typical shut-in and another who is the most popular person in the school. You wouldn’t expect a high school anime about gamers to hold out anything more than comedy but here’s where you are wrong. Bottom Tier Character Tomozaki Kun presents itself with thought-provoking questions about life that make it a wonderful experience.

Tomozaki is the top player of a game called AtaFami and he goes by the username ‘Nanashi’. He meets ‘No Name’, another player who is a strong player but has only ever lost to Nanashi. While Tomozaki is socially inept, Hinami is an all-rounder and a completely opposite personality. The series follows Tomozaki and Hinami’s journey as the latter teaches the former about the game of life.

The anime has a beautifully structured art that touches matters with deep impacts. Here’s everything about the finale of Bottom Tier Character Tomozaki Kun that you need to know!

Spoiler Alert: This article contains details about episode 12 of Bottom Tier Character Tomozaki Kun. Refrain from reading ahead if you haven’t watched the episode.

After the little (big) fight between Hinami and Tomozaki, episode 12 begins with Tomozaki playing AtaFami, much like the first episode of the anime. With a little push, his sister convinces him to reply to his texts. Amidst all the text messages, he comes across Fuka’s date request. He accepts it. They decide to meet at a bookstore.

At this meeting, Tomozaki has no strategy. He has no goals in mind nor any analytical methods provided by Hinami. All he has is himself. Basically, he abandons Hinami’s opinion and follows his own. He consults Fuka about his dilemma regarding true self and the image of self he has created through Hinami’s method. His conversation with Fuka helps him establish that life should not be just black and white. Rather, it should be filled with colors. Fuka tells him that being his true self makes it easier for her to converse with him. Tomozaki receives another pep talk that convinces him to treasure Hinami. He decides to confront Hinami. 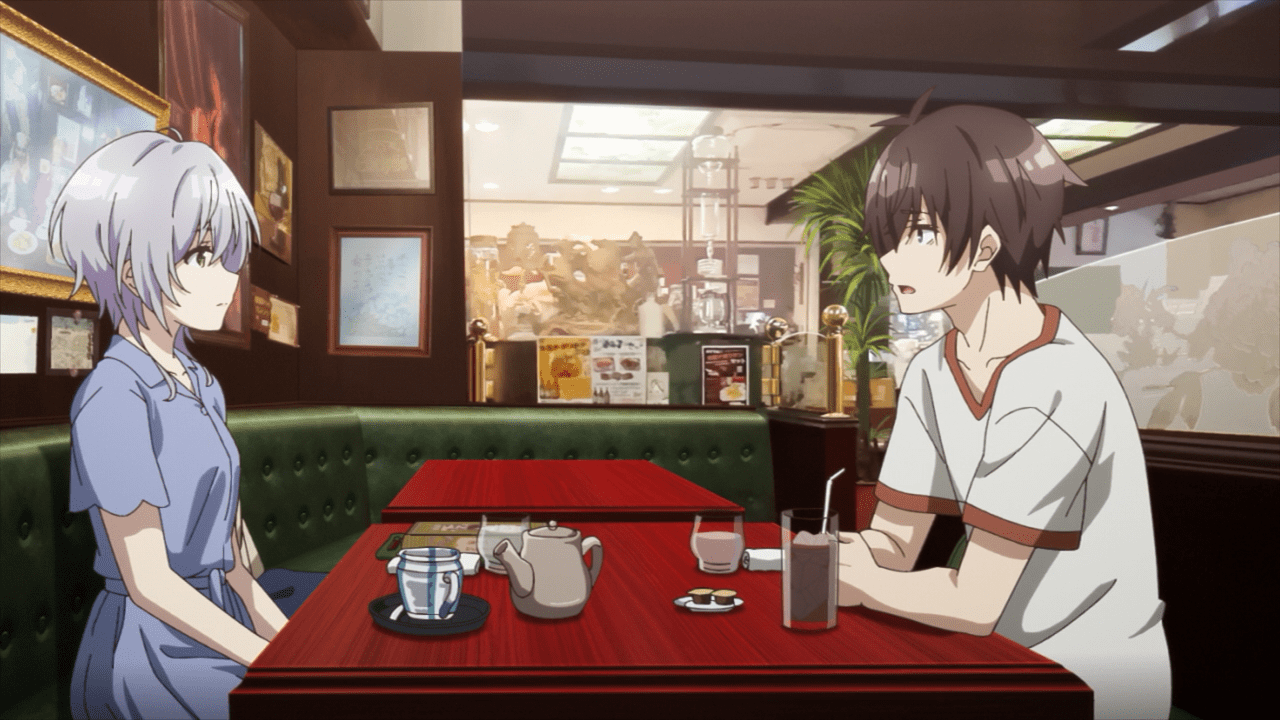 This brings us to another meeting between the polar opposites with clashing opinions. After some efforts from Tomozaki, Hinami finally agrees to meet him. Once again, the series tracks back to the first episode as a deja vu as Nanashi and No Name meet at the same place they did the first time.

Their conflict is finally resolved after Tomozaki explains how he is thankful for what Hinami has done for him throughout the 12 episodes. However, he also wants to have fun all the while playing the ‘game’. They come to a final conclusion as Tomozaki agrees to abide by Hinami’s tasks but this time he can quit tasks he does not want to follow. He also announces that he will teach Hinami to have fun. They reconcile and all is well.

Hinami hands Tomozaki another task: to get a part-time job. He starts working at a karaoke parlor with Mizusawa as a waiter.

You can stream the anime on Funimation, AnimeLab, or Wakanim.

Bottom Tier Character Tomozaki Kun Finale had a thought-provoking plot. The series laid down all eleven episodes to set the stage for this final moment. The final episode presents before us the basic questions that each of us has asked ourselves: What do we want? At the same time, we are also given a clashing argument to question our questions.

The episode deals with two very opposite views on life. One comes from Tomozaki. He despises himself. But, he still wants to accept himself and be true (to himself). He wishes to do what he wants. Rather than the end, he wants to enjoy the process. He explains his point by pointing out that he has been winning against Hinami in AtaFami through this simple rule of enjoying the game. All the strategies and skills provided by her have gained him success but he also wants to enjoy this game. His opinion is one where he believes that he needs no reason to do something if he wants to do it.

On the other hand, we have Hinami’s opinion. Instead of the process, Hinami is more concerned about the results. She refuses to accept the concept of ‘enjoying the process. Hinami does not find it amusing to do something without reason just for the sake of doing it. It is childish and immature to make random decisions just because one feels like so. She believes in winning rather than in living.

To summarise, Tomozaki believes in living to the fullest. Hinami’s analytical point of view is all about having fruitful results. While Tomozaki believes in today, Hinami thinks of the coming future and would base her actions on the thought. It’s rather interesting to view these opinions being reviewed in such an aesthetic aura. The entirety of this episode rests in these clashing views of the two protagonists. It’s difficult to point any one of them as wrong since it’s okay for people to have different opinions on life.

The final episode carried a heavy note. It was an interesting turn of events in a high school anime. Let’s review the basics first. The animation was amazingly done by Project 9. The art style was another beautiful sight in the anime that was not too bright nor too low. It was simply aesthetic and went well with the story. The details were well portrayed and successfully received by the viewers.

The music of the anime was another great thing in the anime. The opening, Jinsei Easy by DIALOGUE+ is something I could hear on repeat. The music within the anime blended well with the scenes and had us getting closer to the characters.

Out of all, what I really want to appreciate in this anime is the outstanding character development. The anime revolves largely around Tomozaki Fumiya so a lot of other characters do not have much screen time. But, despite this, I loved the fact that the efforts that the creators made on Tomozaki paid off well. Starting from episodes 1 through 12, we see a massive improvement in him. In the beginning, he sees life filled with nothing but bugs. Towards the end, his entire opinion is not just refined but it also tallies with the majority population. We see him making friends and gathering ‘skills’ from Hinami. In fact, in the end, he comes from being the bottom tier player to becoming Hinami’s teacher! 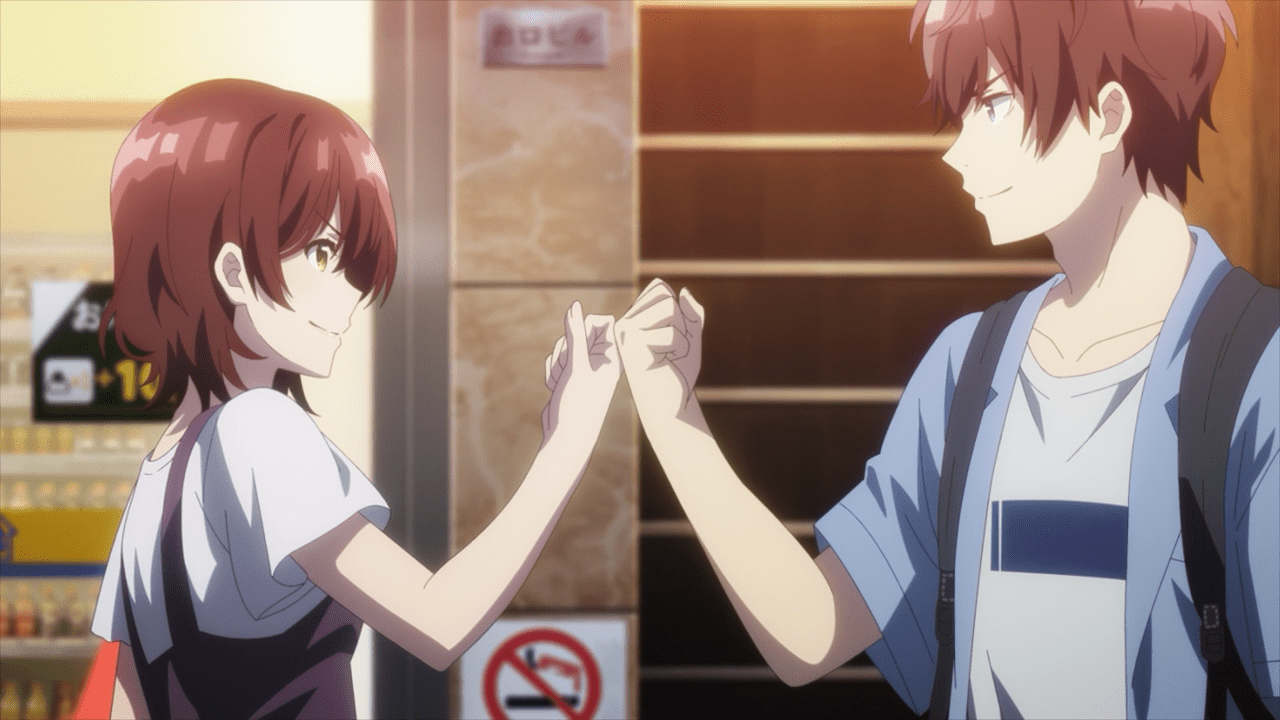 Of course, there haven’t been many highlights on other characters. Despite this, characters like Hinami and Fuka are hard to dislike. They have their moments of the spotlight that makes us love them involuntarily. Hinami is a smart and popular girl who compromises Tomozaki’s opinion in the end. Fuka, who has been a shy girl throughout the series finally opens up to Tomozaki.

The plot was placed under a strong base: People have different opinions on life. I love how the creators made a simple anime so interesting by using this idea. The clash between these ideologies expands our thoughts and helps us reflect on our views. These ideologies are presented without bias. This makes it easier for the viewers to understand what both the characters believe in. The addressed notion about the dilemma that Tomozaki faces towards the end of the series was one that is faced by many.

The anime has a lot of source material still left to be animated. Another season is a possibility especially since the light novel is still ongoing. While I would absolutely love the idea of another season of the anime, Bottom Tier Character Tomozaki Kun season finale was so satisfying that I wouldn’t mind if this was the end.

Bottom Tier Character Tomozaki Kun was a very relatable anime that I would recommend to anyone who likes slice-of-life anime. It might seem rushed at parts but it is an overall satisfying anime that is worth a night of binging.