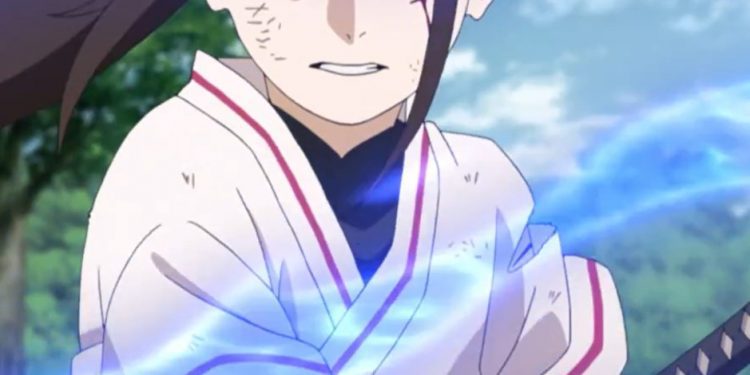 Boruto: Naruto-Next Generations Episode 232 has returned after delaying the last episode. Tsubaki learned to wield a blade with her master, but she couldn’t keep up with his pace. The master notices something when Tsubaki attacks him. He realizes that she has improved. But Tsubaki feels that it is not enough since she couldn’t surpass him. Boruto: Naruto-Next Generations’ latest chapter reveals the mystery behind the rusty sword. Tsubaki wanted more training, but her master Sazanka told her that the training session was over.

She told Sazanka that she wanted to become like him. Sazanka told her not to rush things, but she could hone her skills. Tsubaki wakes up and wonders why she has a dream like that. Later Tsubaki meets with the girls, and they visit the guy who bandits attacked. The girls enter the room and tell that guy that the Leaf sends them to investigate the incident. Wasabi apologizes for bothering the guy and asks him to tell them what has happened.

Namida told the guy not to be afraid and that he could tell them anything. The guy screams when he sees that Tsubaki is Samurai since he knows that the incident is related to a Samurai. He jumps out of bed and asks for someone to help him. Tsubaki has no clue as to what is happening. But she is holding her sword, and that guy thinks that Samurai might cut him. Namida told him they were investigating, and Tsubaki noticed that guys were looking at her sword. The nurse arrived and told the trio to talk with him later. They left the room, and Wasabi felt bad for the guy.

Namida wonders why the guy was terrified after seeing Tsubaki. The trio arrives at the place where that guy was attacked. Tsubaki noticed sword slashes and believed that it was done by someone skilled. She realizes that Sazanka cut trees like that and wonders if he is behind this. Tsubaki realizes that they talked about a swordsmanship tournament in that past and believes that Sazanka would inherit Kurosawa when Lord Mifune retires. She told Sazanka that she had acknowledged him and he was more worthy of the Kurosawa.

Namida wonders if Tsubaki knows who cut those trees with a sword. Tsubaki, Namida, and Wasabi head to the food store and learn about another incident. Tsubaki told the two that she wanted to tell them something before continuing the investigation. She told them about Sazanka, who was known as the genius of the sword. Tsubaki reveals that Sazanka stayed from the sword’s path and pursued strength. One day Sazanka fought with the Samurai, and singlehandedly defeated them since he wanted to steal the Kurosawa, Lord Mifune’s favorite sword.

Sazanka also cut down his fellow disciples, but he ran away after that. Wasabi is glad that Tsubaki told them and wonders if she will be okay. She wonders if Tsubaki will be able to fight the fellow disciple, Tsubaki trains her sword skill in the evenings, knowing they might face Sazanka soon. The next day they head out on a mission. They fooled the bandits after Wasabi used herself as bait to lure them. Namida beat those guys with a single blast. Sazanka arrives to rescue her men, and Tsubaki accepts the challenge. He cut Tsubaki and scolded her that she was Samurai that couldn’t wield a sword.

Boruto Episode 232 will be released on 16 January 2022. Wasabi saves Tsubaki, who admits that she can’t cut Sazanka. Tsubaki also reveals how Sazanka used to dominate her during sword combat. But she knows a move that can take Sazanki down. After training, Tsubaki won the swordsmanship tournament and inherited Kurosawa. Tsubaki knows that Sazanka changed after losing that match, and Wasabi suggests catching Sazabka. Let’s look at Boruto: Naruto-Next-Generations Episode 232 official details.

10 Best Scenes From Ghibli Anime That We Loved