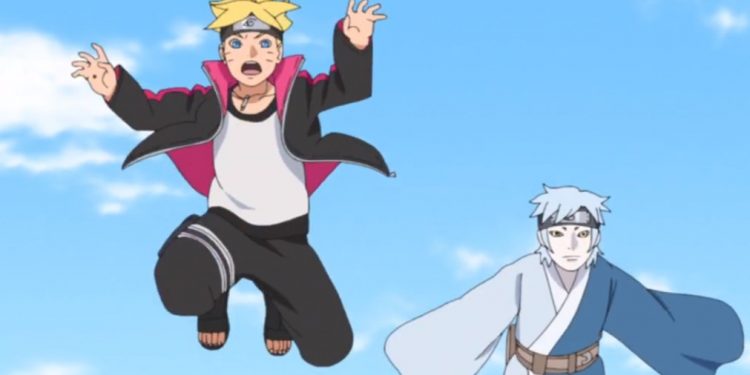 Denki vs. Tsubaki begins Boruto: Naruto Next-Generations Episode 227, after Boruto vs. Mitsuki became a disqualification since they didn’t show up. The Chunin Exams continue, and Konohamaru announces that Denki vs. Tsubaki is the final match. Shikamaru, Sai, and Lord Seventh have accepted that since they have to treat Boruto and Mitsuki like other students. Boruto and Mitsuki are on their way to the Arena, but they are worried that they won’t reach it in time. Boruto: Naruto Next Generations’ latest episode reveals Samura vs. Science as the two get ready to fight.

Sarada and Chocho couldn’t believe that Boruto vs. Mitsuki was canceled. Denki also couldn’t believe that Boruto was disqualified for being late. As the battle begins, Denki wears an armored Scientific Ninja Tool to face Tsubaki, who uses a sword. Boruto and Mitsuki arrive at the Arena thinking that they made it in time. But Sarada reminds them about the rules and that they are disqualified. Boruto wanted to explain why they were late, and Mitsuki tells him to put that aside. Sarada reveals that they were supposed to fight each other, and Boruto wishes it could happen.

Boruto learns that it is the final match and Tsubaki vs. Denki. Tsubaki thinks that her Samurai skills can’t be defeated by science and decided to end the battle with a single strike. But Denki dodges those strikes using the power of science. Denki’s suit can predict Tsubaki’s movement, and she is failing to land a clean strike. Shikamaru thinks that it is funny that Scientific Ninja Tools are allowed. He thinks that Tsubaki will win, but they cannot underestimate Denki. Naruto is glad that it is Samurai vs. Science, and it is an interesting one.

Denki believes that they can say who will win until the match ends. Tsubaki notices that Denki dodges all of her slashes. Denki uses Pseudo Lightning Style: Overdrive against Tsubaki. Boruto is glad that he has seen that Jutsu that Denki pulled. Sarada is impressed that Denki did that using Scientific Ninja Tool. Dr. Katasuke arrives and says that Denki can do anything with that, and he explains how Denki’s suit works. Tsubaki tried all sword styles to cut Denki, but it was a swing and miss. Iwabe thinks that Denki has many tricks that will surprise everyone.

Tsubaki reminds Denki that staying on defense is not enough to defeat her. Denki attacks with a hammer fist, and Tsubaki jumps after realizing that he would win if she tried to block it. The fist destroys the floor of the Arena. Tsubaki learns that she can’t let those barrages touch her, or it will be over before she knows it. Denki comments that he might not be good at using different Jutsu, but he can produce a powerful Lighting Style. Tsubaki apologizes for underestimating him and decides to go all out. She thinks that if she destroys the Scientific Ninja Tool, she will be victorious.

Denki reminds her that he represents Team 5, and she cannot be sure about the victory. Tsubaki thinks that she is doing the same thing, and she has to crush Denki. Some flashbacks of Tsubaki cut the battle. In the present time, Tsubaki exchanges massive blows with Denki, who has the upper hand. Shikadai tries to analyze the battle and thinks that something is weird. Denki grabs Tsubaki and sends her flying. But Tsubaki uses Mifune Style: First Strike to cut through fire and land the first hit.

Boruto: Naruto-Next Generations Episode 227 will be released on 5 December 2021. Denki lost his glass that could predict the movements after Tsubaki tricked him. Tsubaki begins to punish Denki, who has turned the fight into a fist to a fist. But Denki manages to unleash Lightinging Style: Overdrive without using the power of science. Denki uses Lightning Style: Elekiter to defeat Tsubaki. Konohamuru announces their new Chunnin since Chunin Exam is over. Let’s look at Boruto: Naruto-Next Generations Episode 227 official details.