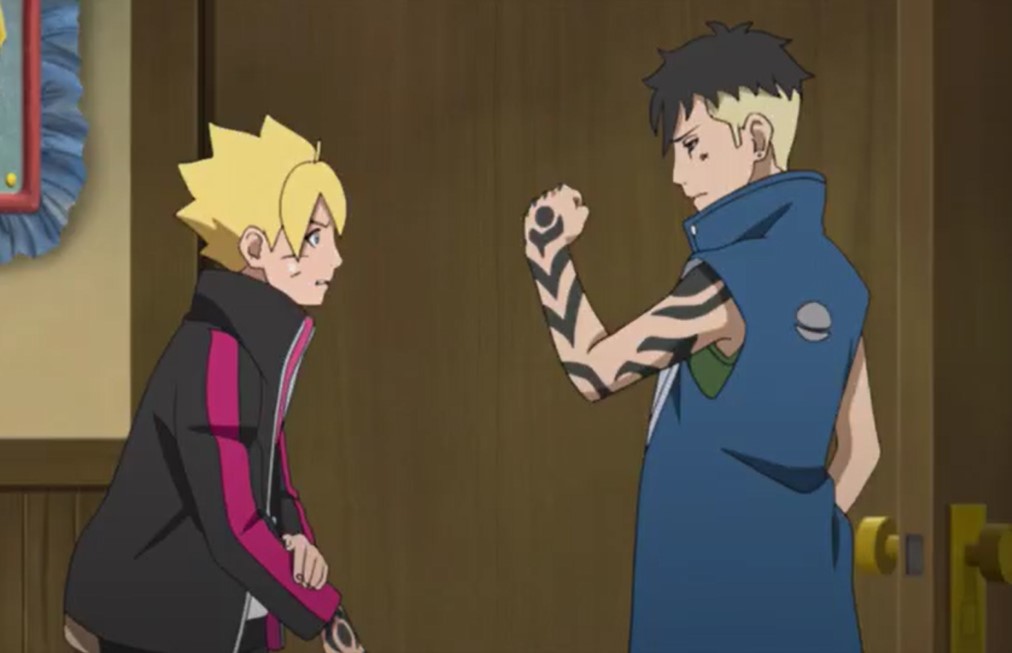 Kawaki has just recently wake up, and Naruto’s Shadow Clone is guarding him. Naruto called a Five Kage Summit and talked about the Kara. He decided not to confine Kawaki since he know how painful it is to be confined at such a young age. Boruto and Konohamaru visited Mugino’s place and talked about the past. Later, Naruto took Kawaki to his home, but Kawaki tried to escape. Kawaki realizes that he doesn’t stand and decided to cope with Naruto for the time being.

They both arrive at Naruto’s house, and Kawaki was cocky. Later Boruto came back and wanted to pick a fight with Kawaki. Naruto heads with Boruto to his room and explains why he is allowing Kawaki to stay with them. They both head back to the living room, and Boruto attempts to greet Kawaki. Boruto told Kawaki that he doesn’t like him, and if he wasn’t to stay in this house, he must learn to behave. Kawaki got angry and broke Hamawari’s vase, and Boruto wanted to beat him for that.

Boruto picked up Kawaki with a collar and told Kawaki that Himawari made that vase as a gift for her mother’s birthday. Kawaki got touched and apologized politely. Boruto notices that this guy is not that bad and decided to let go of his collar. When Boruto was heading to his room, Kawaki reveals his name. Boruto couldn’t understand, and he said that Kawaki is his name. Naruto is glad that the boy revealed his name without being forced. He smiles since he has noticed that this two might get along.

In the morning, Himawari is with Hinata, who told her that she understands that the vase is broken. Hinata told her daughter that what is important is her thoughtfulness that went into making the vase. Meanwhile, Boruto is in a hurry to use a bathroom and finds Kawaki at the door. Boruto realizes that he has to go first, but Kawaki was the first one to reach her. Boruto told Kawaki that he has to go first since this is his house. Kawaki told Boruto that this is not a contest, but he cannot hold it either.

He told Boruto to wake he will go second; Boruto calls Kawaki a freeloader. Kawaki gets angry and asks why Boruto is grabbing him. They started to argue who reached her first, Kawaki says he was, and Boruto said no. They heard a voice shouting, that shut up you two the bathroom’s occupied. Boruto realizes that it is his father inside the bathroom. Naruto told them if they can’t hold it, they can do their business outside. The two head out and do their business near the trees. 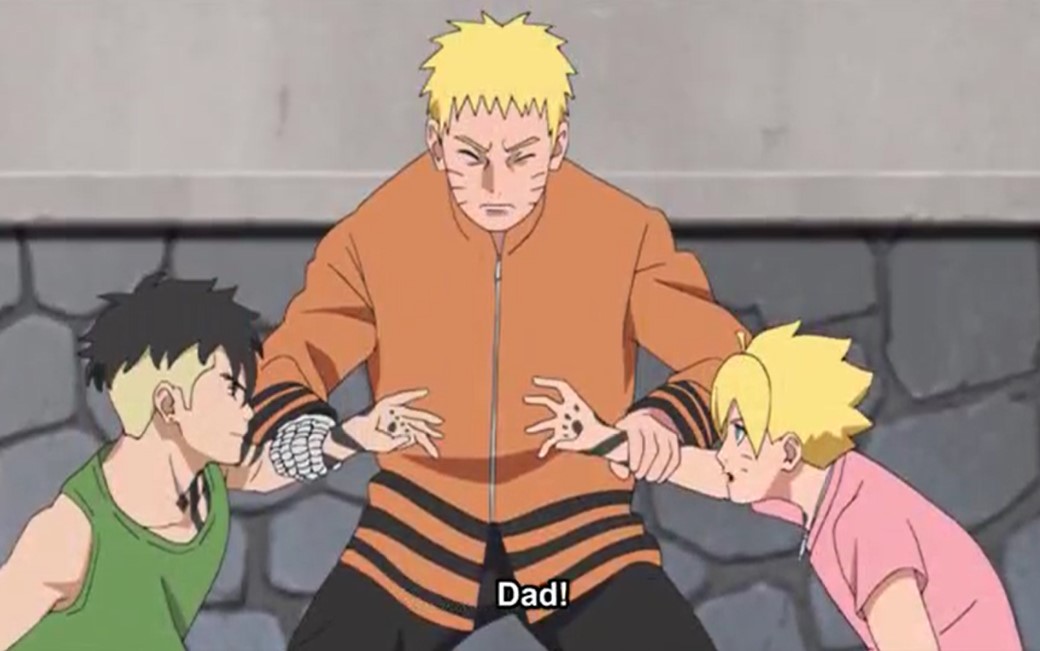 Boruto asks Kawaki why he is standing next to him. He also told him to go somewhere else. Kawaki told calls Boruto a shrimp and told him to stop bossing him around. They both finish doing their business, and Kawaki notices that this is a signal of another battle. They treated to exchange massive blow. During their battle, they both unleash the power of their Karma’s. Kawaki comments that he will beat Boruto. Inside the bathroom, Naruto felt the presence of powerful Ki.

He unleashes his Shadow Clone and sends it to stop the battle. Naruto complains that this, too, can’t let him have peace. He is holding it in and holding the Shadow Clone jutsu technique. He is worried that if he messed up, he might get wet inside the bathroom. Naruto manages to stop the battle. The Uzumaki family started to treat Kawaki nicely, and Kawaki hates to be treated that way.

Later Kawaki told them the truth beyond his Karma. He asks Boruto if he wants to get rid of his Karma. Boruto agrees to team up with Kawaki. But he always reminds him about the Himawari’s vase. Naruto was listening to the two talking, and he is happy that they are getting along. He notices that Kawaki will never try to run away since they have given him the freedom he wants.

Find how Kawaki ad Boruto get to know each other here on Boruto: Naruto Next Generations Episode 194 Preview And Recap.