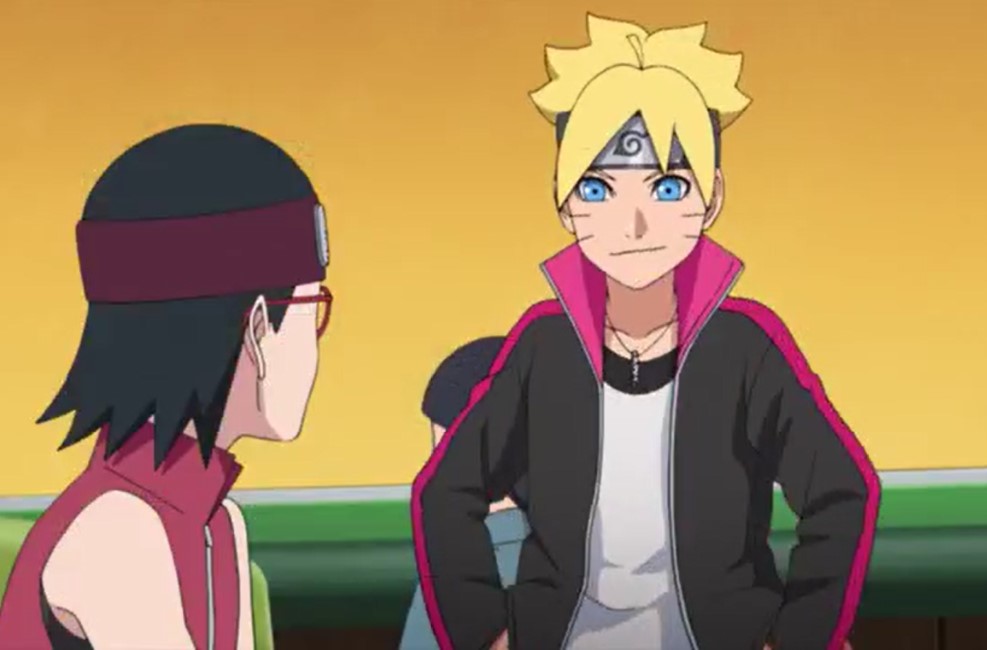 Kawaki has waked up after recalling his past with Jigen. He finds that Naruto, Kohohamaru, and Shikamaru are in front of his bed. Kawaki tried to escape, and Shikamaru uses a paralyzed shadow technique to stop Kawaki. He told Kawaki that they don’t want to harm him. Kawaki decided to cooperate with the trio, and Naruto said it is the second time he is meeting with Kawaki. He told Kawaki that he is Uzumaki Naruto, the Hokage. Naruto realizes that Shikamaru told him that it is dangerous to hold the enemy’s ace card.

The Kara will come looking for Kawaki, and there is a possibility that Kawaki might be a spy. That time Naruto reminds how he was feared due to his Nine-Tailed beast inside him. But people showed him the right path and accepted him. Meanwhile, Dr. Katastuke is showing the powers of nano-sized Scientific Ninja Tools. He reveals that they are effecting peculiar changes upon Kawaki’s cells. He is explaining it to other Hokage of other villages.

He reveals about the mark that is known as Karma that can neutralize an opponent’s Jutsu. Dr. Katsuke also told them that the Karma has also been confirmed on Boruto Uzumaki, the son of Hokage. He told them that they are investigating the connection between Boruto’s Karma and Kawaki’s. Gara realizes why Naruto has called for a Five Kage Summit. Shizune comments that the matter can’t be handled by the Hidden Leaf alone. She asks Naruto if he is aware of what Kara is up to. 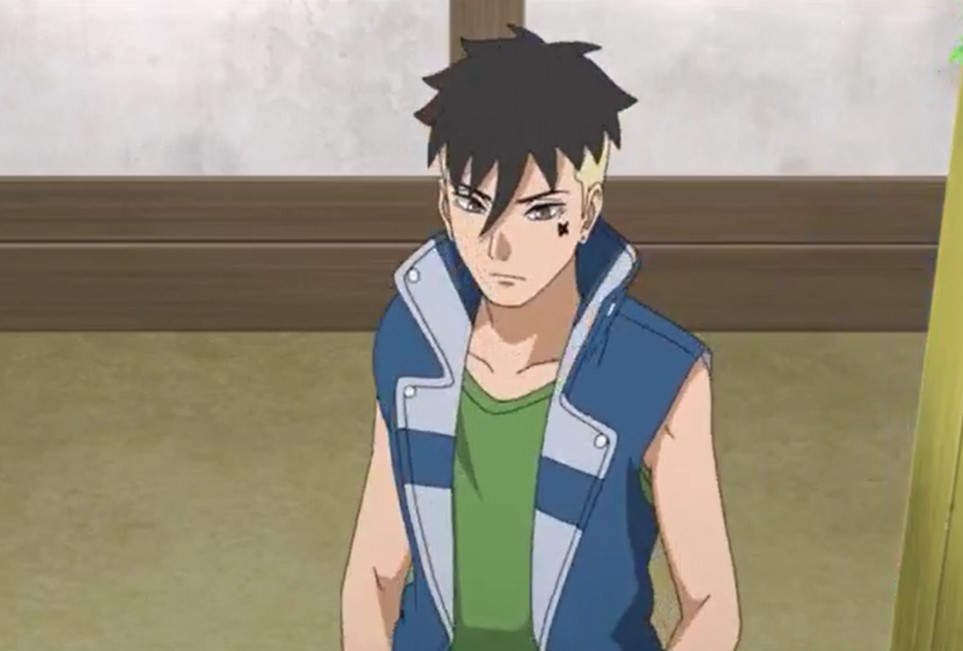 Naruto reveals that Kara is desperately trying to get that boy back. But they know anything apart from that. He told them that the boy is even refusing to tell them his name. Shizune reminds Naruto that he said he has no intention of confining the boy. Naruto comments that he will be under his supervision. Dr. Katasuke shows them the video of Naruto talking to the boy as they speak. Shizune realizes that Naruto has left his clone there.  She comments that Shadow Clone is a useful Jutsu.

Gara comments that he is supporting Naruto’s idea since he knows how painful it is to be confined as a fellow Juchuriki. All the Five Kage supports Naruto’s idea by Shimaru is too cautious. Darui asks if Boruto will be fine since he has Karma. Naruto replies that he is not sure, but Boruto will help that boy to relax since they share the same pain. Meanwhile, Team 7 is at the burger restaurant, and Sarada asks about the boy with Karma. Boruto comments that there is no need to worry about him; his father will take care of him.

Boruto decided to leave, and Sarada wonders why. Later Boruto arrives at Mugino’s house. He feeds the tortoise pet that Mugino had left before he was killed. Boruto apologizes to the pet that he let the pet’s owner die. He decided that he will take the pet home with him. Konohamaru arrives, and Boruto asks why he is here. He replies that he is here to check that house and clean it. They both decided to help each other. Boruto remembers the first day he came to Mogino’s house. 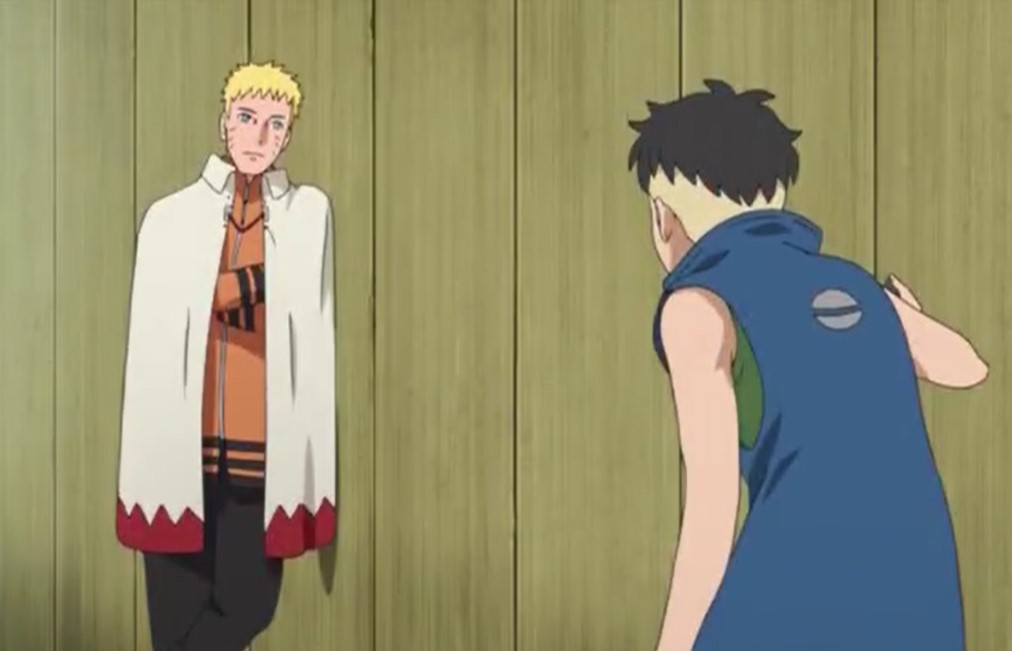 Konohamaru notices the picture of his grandfather and wonders why Mogino has kept it. He told Boruto that Mogino has never told him why he looked up to his grandfather.  Boruto realizes that he knows the reason why Mogino respects Konohamaru’s grandfather. Boruto told Konohamaru to take that picture since it is what Mogino would have wanted. Later Naruto’s shadow clone took Kawaki to his home. Kawaki wonders why they are hot confining him or handcuffing him.

On their way, Naruto talks about his family, but he was talking alone since Kawaki has escaped. He looks back and realizes that Kawaki is gone. Kawaki comments that a Hokage is a fool. He thought that he has escaped, but Naruto appears in front of him. Kawaki tried to escape many times, and Naruto keeps on appearing infront of him. He wonders why and Naruto asks him if he is done. He told him to come home with him. Kawaki is not aware that Naruto is using teleportation Justu.

They both arrive at Boruto’s home. Naruto talks with Kawaki, and Boruto return home. He asks why this guy is here. Boruto comments that it is his house, and they cannot let a guy who rampaged to stay since he almost destroys the lab. Kawaki told Boruto to relax since it is his home. They both quarrel, and Boruto picks up Kawaki with his collar. Naruto stops the two from fighting and explains everything to Boruto. Boruto tries to reason with Kawaki, who broke the vase. But he apologizes said it is Kawaki. Boruto asks him what he is talking about, and he said Kawaki is his name.